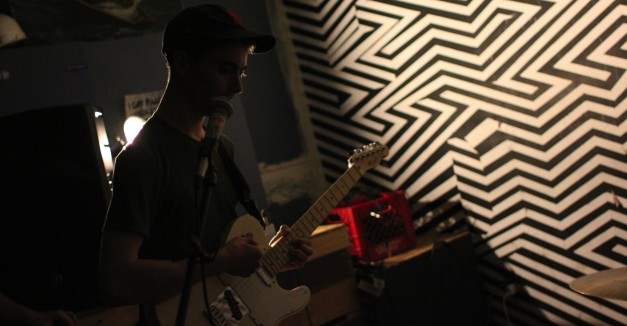 Friday night at Sweatshop, Staffers played its final show in Omaha for the foreseeable future. Stomach and Sean Pratt & the Sweats opened the show. Staffers, the solo project of Ryan McKeever bade farewell, as McKeever will soon move from Nebraska. McKeever’s other band, Telepathy Problems, will play its final show at Sweatshop on Friday. RSVP here.

words and photos by Samuel Bennett

Staffers (photo of McKeever above) 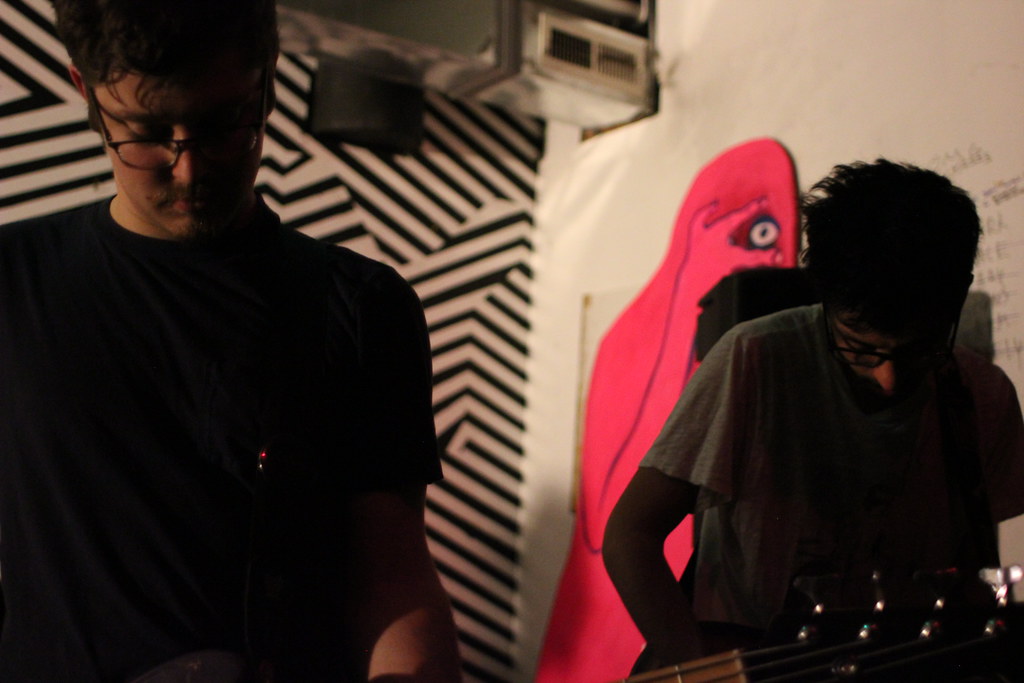 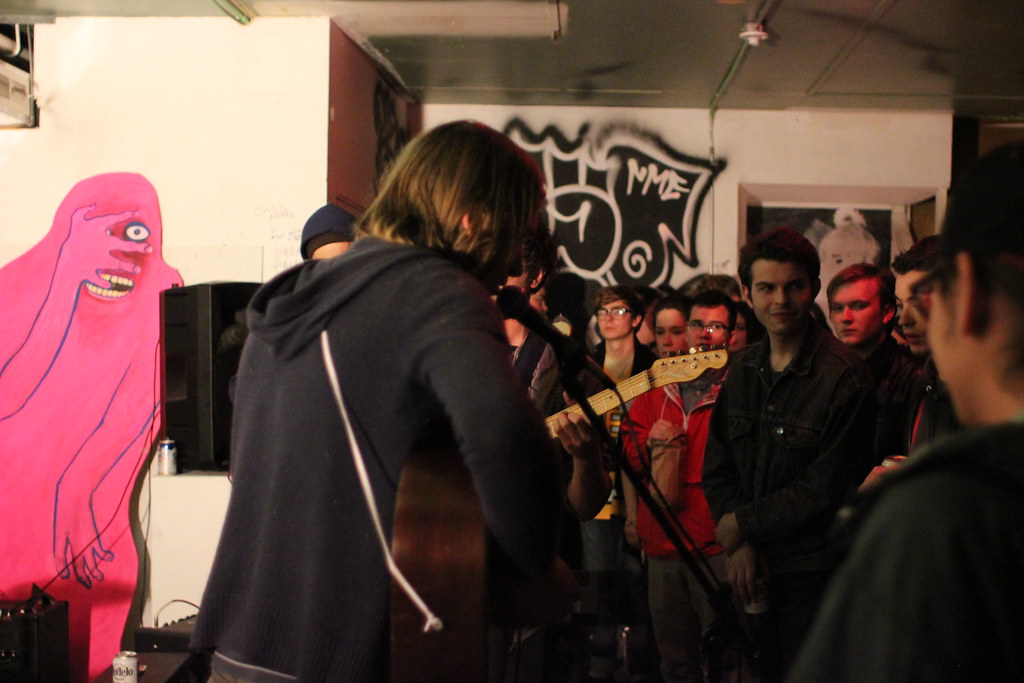 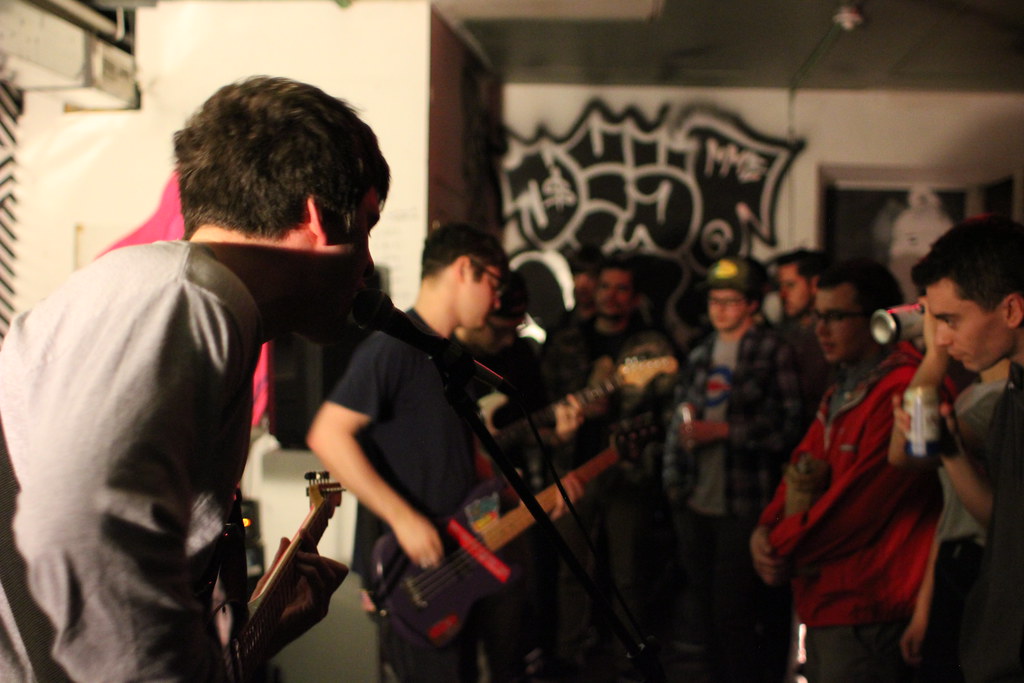 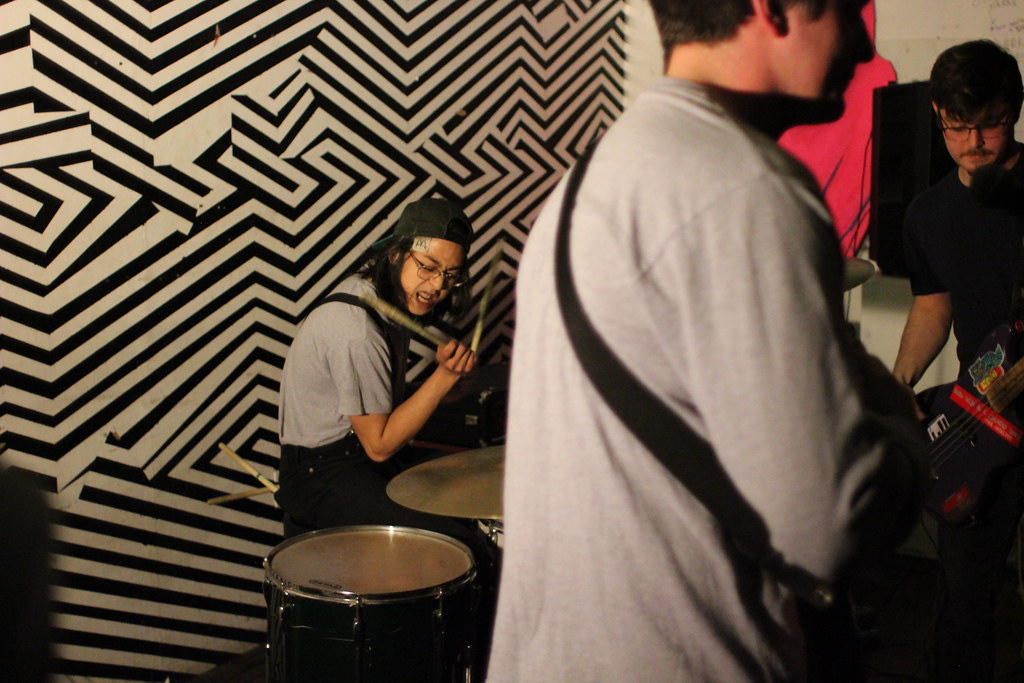 Contributing writer Jeff Lawler was at O’Leaver’s on Saturday for The 4onthefloor:

In 20 seconds, you will either be on the dance floor, or buying a drink from one of the fine bartenders. It’s a simple choice. Time to make some decisions,” said Gabriel Douglas, lead singer of Minneapolis-based rock band The 4onthefloor. This pretty well sums up the raucous atmosphere at O’Leaver’s Pub on Saturday night.

The night kicked off with local act Sons of (O’Leaver’s, in this instance), who turned in a set of bright, mid-tempo rock. The official band name is Sons of, and they simply adopt the name of whatever bar or venue they’re playing at. Driving, jangly guitars, combined with a no-nonsense vocal approach, got the evening off to a solid start.

Fellow Omahans Clarence Tilton followed up with a different, but no less energetic, sound. Sporting a pedal steel player along with guitars and a rhythm section, they ripped through a set of rock-infused alt-country, wowing the crowd of around 100 with rollicking guitar licks, pedal steel flourishes and gritty vocals.

Headliner The 4onthefloor took the stage around 12:30. The band was formed in 2009 in Duluth, Minnesota and has steadily grown their popularity from the upper Midwest to the rest of the United States, playing small clubs and opening for high profile acts such as Willie Nelson and Drive-by Truckers. They play in a slightly unusual formation — all four members play in a straight line, each with a kick drum at their feet, creating an extremely close-up, intimate atmosphere. The kick drums were deployed throughout the night, giving the songs some added drive.

They opened their set with “King of the Jungle,” a bluesy rocker that gave the the crowd an introduction to the band’s aggressive sound. Most of the set consisted of fast paced, searing rock songs. The drummer provided a steady back beat, and the guitars and bass created a crunchy, distorted wall of sound.

A highlight of the set was “On Tuesdays,” a boisterous drinking song dedicated to the bartenders at O’Leaver’s. They closed out out the show with “For Pa (For Ma),” the aforementioned dance number. Douglas took off his guitar and ran around the bar, herding everybody onto the dance floor, ending the show on a rousing high note.

Des Moines’ 80/35 Festival has been finalized with the addition of a handful of popular regional acts.

Annalibera, Christopher the Conquered, The Kickback and many others will join an already stacked lineup for the multi-day festival’s eighth edition. Notable national acts on the festival’s diverse billing include Jenny Lewis, Wilco, Weezer and Run The Jewels, among many others.

The festival will also reprise the Generation Z stage, which provides an opportunity for young musicians of junior high and high school age to gain performance experience in a festival setting. This year, performers include Grant Ganzer, Grandchamp, 515, The WAYV, Break the Cycle, Girls Rock! Des Moines Showcase, Punched by Proxy, and Lily DeTayae.

And quick shoutout to our friends at Des Moines Music Coalition — with whom we share the mission to promote local music and foster the creative community — for helping to organize what has become a must-attend Midwest festival. Each year it seems to grow and attract a wide array of national acts while filling stages with great regional bands.

The quartet will travel to South Dakota, Iowa and Nebraska in support of Recrudescence, the second installment in frontman Chris Schoenberg’s fantasy concept series. For those familiar with the band, this album represents an Empire Strikes Back of sorts, as the hero Isentroud has been defeated by a dark nemesis.

“We really like writing concept albums,” Schoenberg says. “It gives you a loose boundary to work against with your creativity.”

It might sound unorthodox to play five release shows, but Schoenberg tells us via email that their run makes sense for a couple of reasons. Its members — guitarist Dan Schoenberg, bassist Chuck Fleming, drummer Merritt Blackburn and Schoenberg — are all too busy for a three-month tour, so handpicking a few weekend dates in June worked best. Plus, Schoenberg says that “release shows” are often better attended.

“I’ve always thought that was sort of funny because the release shows really aren’t any different than any other show, but who cares?” Schoenberg says. “A party is a party.”

See Primal Waters’ release date schedule below, and sample “An Odd Time To Wait,” from the new album.

Brace yourself for the mini-British Invasion in Omaha tonight.

Indie rock fivesome Palma Violets plays The Waiting Room with Public Access TV. Tickets are $12. RSVP here. The Lambeth, London, outfit released its sophomore album, Danger In The Club, May 4 on Rough Trade Records. Notably, the album was produced by John Leckie, who got his start at Abbey Road Studios working with the likes of John Lennon, George Harrison, Wings and Pink Floyd. Leckie also produced Radiohead’s The Bends and Muse’s Origin Of Symmetry.

Australian singer-songwriter Darren Hanlon plays O’Leaver’s with Grape Soda and Nathan Ma. Hanlon has toured with the likes of David Dondero, Tim Kasher and the Violent Femmes, engaging live audiences with charming, down-to-earth storytelling. The folk singer is also known for his quirky music videos, one of which can be viewed below. Hanlon released Where Did You Come From?, his fifth LP, earlier this year. Entry to the show is $5. RSVP here.

Around the corner, Joshua Powell & the Great Train Robbery begins a two-night Nebraska run, performing at Reverb Lounge with Memory Mines, Matt Cox and Super Ghost. Tickets are $8. RSVP here. The Indiana folk band will officially release its new album, Alyosha, at a Jully 11 show in Indianapolis, but are making the album available to all who attend a stop on their string of Summer 2015 shows. They play Duffy’s Tavern tomorrow night with the Evan Bartels Duo and Andrea Von Kampen. RSVP here.

For the rest of this week’s shows, check out our events page here. Also, feel free to hit us up at news@hearnebraska.org for added events, news tips or story ideas.