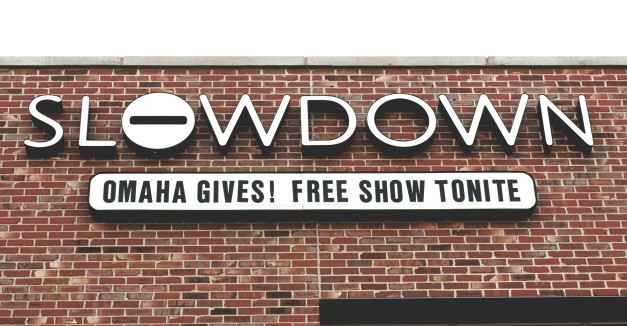 According to Slowdown co-owner Jason Kulbel, venue ownership had been in contact with the Knitting Factory off and on during the last few years, proposing its addition to a roster comprising clubs nationwide. With little prior experience, Kulbel has done much of the booking since the club’s opening in 2007. One-Percent Productions has also played a major role in filling the venue’s calendar.

He says that without the time to be proactive on a consistent basis, the move made sense.

“It’s not unlike how we started the club and not unlike how we started [Saddle Creek Records],” Kulbel says in reference to booking prior to its Knitting Factory deal. Saddle Creek and Slowdown are both owned by Kulbel and co-owner Robb Nansel. “It’s a lot of trial and error. There’s a point where you run out of time and build frustration. It seemed like a good time to get some outside help.”

From a market standpoint, the Knitting Factory partnership seems like a great fit. The original venue bearing that name opened in Manhattan in 1987, moving to its current Brooklyn location in 2008. Its Reno, Nev., location opened New Year’s Eve 2009, followed by locations in Spokane, Wash., and Boise, Idaho — smaller stopover markets that have seen a rise in their respective scenes in recent years.

The move also makes sense on a philosophical front. Musically, Knitting Factory focuses on a multi-genre approach dating back to its flagship venue’s run as a jazz club. Company representatives came to town in November to get a rundown of the venue, Kulbel says, taking stock of everything from booking philosophy to the types of beer sold.

“Within 10 minutes of sitting down with them it was clear we connected with them on a lot of levels,” Kulbel says.

Kulbel doesn’t expect to see the impact for a few months. But going forward, it’ll be a more measured and deliberate approach to filling the calendar with quality concerts.

“I’m not expecting any immediate miracles or for them to say ‘Look at the 10 holes that we have in the calendar in March,’ and magically fill them with these amazing shows,” Kulbel says. “We just want quality shows that people want to see.”

On the local side, Kulbel says the move involves little overhaul. He will still play the primary role in booking Nebraska acts to fill national lineups and front-room shows, and will continue to work with local agencies like One-Percent, Rad Kadillac and Perpetual Nerves. Kulbel says working with a like-minded organization (as opposed to a corporate concert broker) means their principles and operations strategies will not change.

As we noted earlier in the week, there are many qualities of Andrea von Kampen’s music that make it captivating. Apparently, NPR has taken notice.

The Lincoln singer/songwriter’s entry into NPR Music’s Tiny Desk contest has been featured on that outlet’s tumblr. For her clip, von Kampen performs a tender break-up song in “Let Me Down Easy.” It was filmed Saturday at Marble Music studio in downtown Seward, Nebraska, and submitted Tuesday.

“It was pretty crazy to see it on NPR Music,” von Kampen says. “I just got a random twitter email that they had tweeted about it and at first I didn’t really believe it.”

Throughout the contest, which runs through Feb. 2, NPR Music has featured select videos from the surely hundreds of clips it receives. Here’s what co-curated Ben Naddaff-Hafrey had to say about von Kampen’s piece in the blog:

“The first thing you’ll notice about Andrea von Kampen’s “Let Me Down Easy” is her voice. It’s a yearning voice that soars far above her low, booming guitar. If her belting doesn’t get you, her vocal flips on the chorus of this break-up song will.”

View the video below: