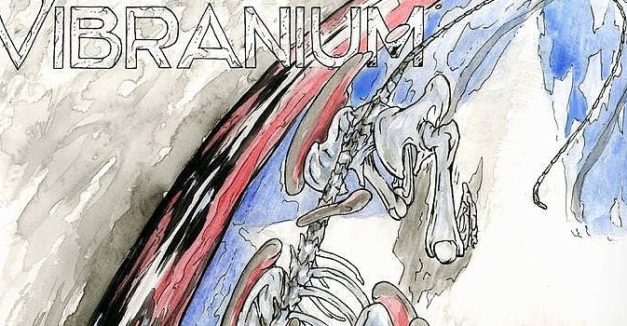 After sporadically releasing track by track over the last few months, Sleep Sinatra’s long-awaited collection is finally out.

The Lincoln hip-hop artist released Vibranium today via his Bandcamp page. The 17-track album includes recent releases “DreamWars” and “Nezhno” amongst a handful of new cuts.

Vibranium also features a wide cast of collaborators such as producers ICHIBANHASHFACE, Izra, Mamadu and Mild David (among others) and guest appearances by Lincoln emcee Hakim, Minneapolis artist Toki Wright and Omaha’s Verze.

“This album is my brainchild,” Sleep tells HN. “I’ve been working on it for over the past year. It features some of my favorite local and national artists, MC’s and beat makers I respect and have a mutual bond with. This album is my thoughtpiece/perspective on the world today. It is lyricism, AfroFuturism and life lessons.”

Sleep’s on-record collaboration is emblematic of the emcee’s efforts to foster a local hip-hop hotbed. He founded and curated the monthly Good Gospel series at Lincoln DIY venue Church, and while currently on hold, it has provided a space for foregrounding black hip-hop voices.

Listen to Vibranium below:

Gabriel and Graham Burkum announced a new project in late 2015, after spending years with the likes of Skypiper and its own namesake Burkum Boys.

That new project, Jagaja, debuted its first track, “Hypno Girl,” in video format yesterday via YouTube. The bouncy, danceable number is featured on the band’s forthcoming self-titled album, which it will release Friday, June 24 at The Waiting Room (RSVP here).

There’s a sheen on this first look, from the production of “Hypno Girl” itself right down to the video details. The brothers Burkum recorded the album in Omaha and Minneapolis, and went big in the album’s finish. It was mixed in Nashville by Eddie Spear (Jack White, Arctic Monkeys, Neil Young) and mastered in Austin, Texas by Chris Athens (Nada Surf, Sleigh Bells, Drake).

The result, at least here, is a glistening, pop-oriented dance track and a video that seems to draw sleek inspiration from Bond film opening credits to iPod commercial.

The Dundee bar kicks off its 16-week series tonight with Montee Men and Ferral Hands (RSVP here). The schedule reads like a who’s-who roll-call, with Thick Paint, Digital Leather, Closeness, Miwi La Lupa and ragtime regular Dan McCarthy all listed among a ton of highly active Omaha musicians. Find the schedule in its entirety below. All shows are free, 21-plus and start at 10 p.m.

Tonight, Edmonton, Alberta country artist Corb Lund comes to The Waiting Room, 6212 Maple Street. Lund tours on the strength of his ninth studio album (with The Hurtin’ Albertans) Things That Can’t Be Undone, out October 2015 on New West Records. Dripping in swagger, it blends classic Americana, honky-tonk and folk to create a ‘60s and ‘70s-influenced country record. Omaha’s Township & Range opens for Lund for its second time. Tickets are $20, RSVP here.