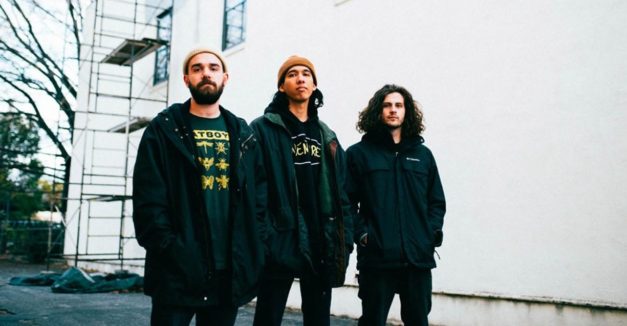 It was the end of 2015 and Caleb Cordes didn’t know if his band would have its debut full-length. Sinai Vessel, his longtime solo project, released a pair of EPs in 2011 and 2013 and then solidified as an emo punk trio. But a scrapped recording session two years later left things in doubt.

“There were times during which I genuinely believed it was all just going to cave in,” Cordes says. “So being in the clear and it being received well is nice.”

Sinai Vessel’s long-awaited Brokenlegged (Tiny Engines) is now out in the open, two years of writing and re-writing finally bearing fruit. The craft shows, with Cordes’ singer/songwriter roots and strained, affecting rasp fleshed out dynamically by the rhythm section of Joshua Herron and Daniel Hernandez.

Ahead of the trio’s April 9 show at Milk Run, Cordes chatted with See Through Dresses’ Sara Bertuldo about looking ahead to the next project, his preference on playing solo or with the band and finding merch in strange places. Read the full interview below:

Sara Bertuldo: Sup, road dawg. You’re touring so much! This current tour you’re with Household. How’s the tour so far? How’d you get acquainted with that band?

Caleb Cordes: Hello hello! We are, yes. This tour’s been fine externally and fascinating internally, at least for me. We took a significant chunk of time off of the road before our LP came out in January and, in short, that time and free mental energy allowed for a lot of tough personal growth to happen — I’d begun a healthy process of really sorting through my life in a way I hadn’t before, and thus home became an actual place of importance rather than my bed-between-tours. All that to say, I miss home (which is new and strange) and I’m trying to translate that process of learning and growing to doing it on the road. Being transparent about it seems to ease the transition, so, you know — long answers.

SB: Congrats on the release of Brokenlegged! I know it took a while for its release and we are sort of going through the same thing. I remember talking to Chuck [Daley from Tiny Engines] end of 2015 and I think y’all were in the middle of scrapping the first recording or something. We thought our second album was going to take a lot less time to record than we did. But here we are with albums releasing in 2017. How does it feel for it be finally out?

CC: It’s wonderful! It’s a surreal kind of relief for it to finally be out, just because there were times during which I genuinely believed it was all just going to cave in. So being in the clear and it being received well is nice! That said, though — it’s essentially an old record to me now. We started it over two years ago! I’ve admittedly already a new set of goals and places I’d like to go with our art that — as a matter of course — our present body of work doesn’t satisfy, so I’m hyper eager to write and process all that’s happened in my life since.

CC: God, what a weird narrative to try and tell when you feel like it’s always been there! I’m always rearranging that story. My present version goes like this: my parents’ love for their CD collection — and my dad’s adoration of songwriting in particular — was infectious enough that, at a really young age, it become obsessive for me. Eventually I wanted to jump in and pilot whatever spirit was making me love those songs so much, so I started learning instruments and almost just as soon started writing songs with them.

SB: I’ve met your bandmates, they are really quiet. Tell me how y’all found each other. Do you have a preference on playing solo or playing with a full band?

CC: Ha! I laughed at that — they certainly can be. I’m probably the most willfully talkative in the band, but — that said — I’m probably also the most susceptible to wasting words or being disingenuous, so their quiet is something I can always learn from.

I met the other two in high school, and they met each other in grade school years before. It wasn’t until we’d all graduated and spent some years apart, however, that I came to my senses and asked them to be in the band. Their involvement really crystallized (and continues to inform) what Sinai Vessel is as a capital-b Band, whereas before it was just me and a revolving door of backing members.

That’s a good question — I think my preference changes according to the goal. What kind of show is it, what songs are we playing, what are we trying to convey, etc. I’m both a control freak and a songwriter at heart, so playing solo allows me a lot of freedom and presence to shape a song differently each night. There are few kinds of fulfillment, though, that grace the breed I come into contact with when I play with Josh and Daniel. We’ve a mutual trust and confidence that makes full band sets a blast. I think that, moving forward, the solo sets will begin to inform the full band presentation a little more — I’m only more drawn to the power of intimacy, and I’d like to see if we could evoke that with all three of us present.

SB: So you play a Reverend guitar! I’ve got a Flatroc myself. What drew you to that particular guitar?

CC: They’re lovely! The Charger is really the first non-beater guitar I’ve ever owned, and it’s been kind to me for years despite me not knowing how to really use its power. I almost exclusively play and write on a really cheap old acoustic, so electric guitars have always felt a little too loud and sort-of unnatural to me. From what I can tell, though, it’s a beautiful instrument that plays wonderfully and poses no obstacles.

SB: True story, we were on tour and found a Sinai Vessel sweatshirt left behind the stage at one of the venues we played. Nate took it. Are we bad people?

CC: The real criminal is whoever left it behind. I’m glad it’s in Nate’s loving hands now, and furthermore that 50% of your band owns our winter merchandise. We worry about you all in the south — Omaha can be something of a tundra, eh?

SB: How sweet are The Lemonheads?

Kaneko’s has announced the third installment of its Eko Nova series.

The concert happens Monday, April 17 at Kaneko. Tickets for this performance are $15 for general public, and $10 for KANEKO members & students. Find them here.

Find more shows via our statewide calendar here. Have a news tip or story idea to share? Email us at news@hearnebraska.org.