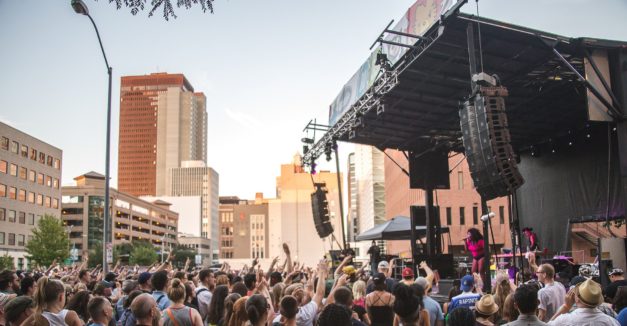 Our music nonprofit neighbors to the east have announced their summer festival lineup and it’s a big one.

The Shins and MGMT will headline Des Moines’ 80/35 music festival, Des Moines Music Coalition announced Tuesday. The former is back in the national spotlight with Heartworms, its first album since 2012’s Port of Morrow. MGMT burst onto indie rock scene in 2007 with the fan-heralded Oracular Spectacular.

80/35 enjoys its 10th-anniversary this year during its July 7 and 8 concert event. DMMC started the festival in 2008 with the aim of strengthening the city’s live music economy and “to further enhance a creative, vibrant culture,” according to its website. The festival is one reason Des Moines continues to attract touring artists throughout the year.

Last year’s lineup featured Nas and The Decemberists with the likes of Lotus, Wolf Parade and The Black Lips (check out our 2016 day-two coverage here). Expect more 2017 artists to be announced in the coming weeks.

Tickets are on-sale now; two-day passes are $65. Find them here.

Orenda Fink and Cedric LeMoyne, as O+S, now have a date set for the eight-year follow up to their debut self-titled project.

The duo have shared new single “Remember When … (The Backroads)” with Brooklyn Vegan. The track will appear on its forthcoming sophomore album You Were Once the Sun, Now You’re the Moon, which drops on Record Store Day, April 22, via Saddle Creek.

Of the new album, Fink explains via press release that it was nearly scrapped. Recorded five years ago in Birmingham, Ala., it explores the grief and pain LeMoyne felt in the wake of his friend Gregory Slay’s death (both were in Remy Zero together). While she says there will be no tour or live performances of the album, its resurrecting by producer Andy LeMaster brought the songs to life in a way that she says deeply affected both of them, so much so that they wanted them in the world.

“Remember When” is a sunnier, more upbeat offering than the album’s first single, “Hold You Down.” It fondly reminisces about simpler times on the titular back roads, its acoustic guitar and Fink’s soothing voice invoking warm scenery. Listen below:

In touring news, The Amublanters have confirmed a 21-day west-coast tour starting next month and stretching into June. It kicks off Thursday, May 11 at Zoo Bar with Unmanned, A Ferocious Jungle Cat and Gnawstic, and ends with two Nebraska dates, June 2 and 3 at Gillie’s in Kearney and O’Leaver’s.

The Ambulanters are less than a year removed from releasing the punchy, dynamic debut EP Leave The House. Listen here.