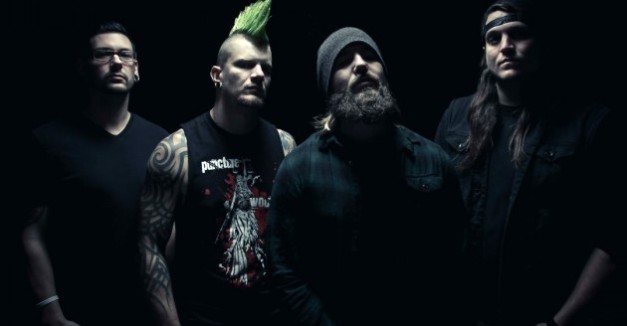 Omaha’s own Screaming For Silence has been selected from thousands entries as this year’s Ernie Ball Battle of the Bands winner. As a result, the hard rock/metal quartet will join Linkin Park, Rise Against, Judas Priest and others at the massive Rock on the Range festival in Columbus, Ohio this weekend.

But it’s not SFS’ first taste of a national stage, as the band has toured consistently across the nation since 2012 and released its debut self-titled LP in January. The album’s first single, “A King Is Crowned,” recently checked-in at #38 on the Billboard Mainstream Rock Indicator Chart.

Rock On The Range has grown rapidly since its 2007 debut, now consisting of three days, more than 70  bands and 100,000+ in attendance in each of the last two years.

In addition to earning their spot on the Ernie Ball Stage at the festival, Screaming For Silence will also receive more than $15,000 in gear from Ernie Ball, Zildjian, DW Drums and more. Their performance will be broadcast live on AXS TV as part of the station’s coverage of Rock On The Range. The Omaha band is slated to play on Saturday of the festival.

Most of the night’s special feeling came from a lineup of artists who likely wouldn’t play your run-of-the-mill tribute show. Artist-specific reinterpretation of the neo-classics would be the main attraction.

Two covers that jumped out: Thirst Things First did a jumpy, irreverent version of “Aneurysm.” With its teeny-bopper-skewable refrain, Mikey Elfers and co. — dressed like rain-allergic crossing guards — hit that TTF sweet spot of mockery and full-fledged happiness. And if you’re wondering if BOOT was superimposed onto the cover of Nevermind for all to see, wonder no more.

Adding backing players for the first time, Miniature Horse (usually Rachel Tomlinson Dick’s solo project) executed a pitch-perfect cover of “Breed.” There are already moments in her expert guitar work when Tomlinson Dick walks about a fretboard in a stringy way not dissimilar from Nirvana leadlines, and joined by Bogusman’s Nate Luginbill on drums and Katherine Morrow on bass, last night’s “Breed” thrived on a beautifully aggressive and bare lo-fi balance.

Then, Bogusman closed out the night with sheer power.

As for shows tonight, Brooklyn roots trio The Lone Bellow plays The Waiting Room with Cereus Bright and Clarence Tilton. RSVP here. We caught up with The Lone Bellow’s Kanene Pipkin earlier this week for an interview, only to find out she spent many-a-summer in Omaha. Her mom is a Nebraska native and her “Uncle Steve” owns the burger joint Bronco’s. Small world. We chatted further with Pipkin about the unifying qualities of harmony singing and making The Lone Bellow’s new album with The National’s Aaron Dessner. Read it all here.

There’s a handful of other shows on our calendar tonight, including Funk Trek and Paa Kow at Zoo Bar. As always, find our fuller show listing at hearnebraska.org/events. And if you don’t see the show you’re looking for, we’d love for you to add it with the “Contribute” button.