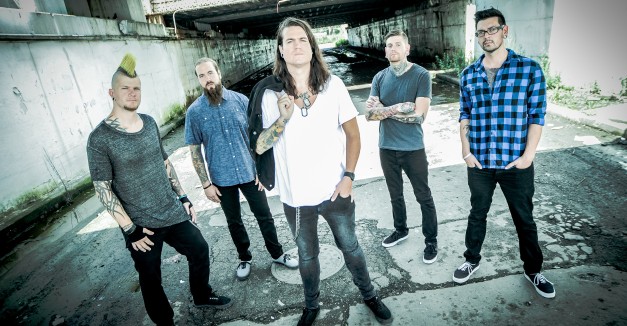 The first-year festival revealed Omaha hard rock band Screaming For Silence as the official headliner for its Aug. 5 concert event at Stinson Park. Organizers at Raleigh Science Project say they will release the rest of the lineup, including vendors and sponsors, in the coming weeks.

It isn’t a stretch to call Screaming For Silence one of the hardest working bands in the state. The five-piece outfit regularly tours nationwide, playing upwards of 150 shows per year in the last three. The fivesome released its debut self-titled LP last January. The album’s first single, “A King Is Crowned,” initially checked-in at #38 on the Billboard Mainstream Rock Indicator Chart. This year, the band scored slots at Locofest Aug. 12 in Algona, Iowa and Rocklahoma May 28 in Pryor, Okla., with Disturbed, Rob Zombie, 3 Doors Down, Five Finger Death Punch and Chevelle.

As a brand new venture, New Generation Music festival aims to “bridge the gap between coasts” while highlighting up-and-coming regional independent artists in all genres. Early-bird tickets are on sale now for $20 at the Raleigh Science website. LIV Lounge, 2285 S 67th St, will host the official after-party.

Tim McMahan’s multi-decade run as one of Omaha’s most prominent rock critics has yielded some ink in reverse.

Omaha Magazine chronicled the Lazy-i founder/blogger’s career in a recent feature for its website. McMahan (also a current HN board member) and writer James Walmsley discussed his humble beginnings writing for free CDs all the way up to the present as “the old guy at the show.” After all these years, McMahan finds his work to be as important as ever.

“I think criticism has never been more important than it is now, because there’s so much music out there that it’s impossible to filter through it all,” McMahan told Walmsley. “Now the new problem has nothing to do with access, it has to do with time—we just simply, physically don’t have the time to listen to everything, so we have to have someone curate for us.”

Read the feature in its entirety here.

Intro and Q&A by Marty McMoon

[The following Q&A with New York-based EDM singer Father Dude was contributed by Lincoln artist Marty McMoon, who preferred to be called by his performance name. It previews tomorrow night’s show at Bodega’s Alley, 1418 O St, with SteLouse, Omaha hip-hop duo Both, Marty McMoon and Lincoln’s RealEyez. Tickets are $12 in advance, $15 on day-of, RSVP here].

When I first found out about New York-based singer Father Dude and Denver producer Ryan Ross aka SteLouse, it was when Spencer Munson asked me to open for them. I grabbed my phone right away to check them out on SoundCloud. The first tune I listened to was by Father Dude, a song he was featured on called “IMISSU” by San Holo. His voice was very captivating. It was emotional, yet incredibly energetic. This is one I’m looking forward to hearing at the show on Thursday. His voice fits very well in electronic music, and every song he’s been featured on has benefitted greatly.

Then I took a listen to SteLouse and the song “Call Me” w/MYRNE. This tune has a crazy amount of energy. It’s loaded with unique synth work and airy melodies. The drops on this one are out of this world. Another one I liked was his remix of “Say My Name” by ODESZA ft Zyra. When this remix competition was going on a year ago, I did one under my EDM/DJ name COLE. He clearly killed it on this song with his future bass remix.

Father Dude has become somewhat of a breakout artist over the last year, with more than 10 million Soundcloud plays and 4.5 million on YouTube. He helped define the “Superfuture” sound as part of the Smokey Robotic collective, and has worked with many up and coming EDM artists including TroyBoi, San Holo, Lido, Brasstracks, Savoy and more.

I was pleased to exchange emails with Father Dude earlier in the week. Read on for our conversation about his early influences, a typical work day and his advice for beginners.

Marty McMoon: When you were first getting started who influenced you?

Father Dude: I was first heavily influenced by soul and r&b from the 1950s and 60s.  That’s where my heart is. Sam Cooke, Elvis Presley, Roy Orbison. I later got into everything under the sun from metal to jazz fusion. Early individual influences had to be family and friends who set a higher musical standard for me to attempt to reach.

MM: Who are your current influences?

FD: I like a lot of stuff but I guess the most recent stuff that I find “influencial” is from most of the guys I work with. I feel like if we’re collaborating and working, what makes for a bigger influence? Other than that, currently I appreciate Kanye and Snarky Puppy.

MM: What was going through your head after your very first live performance?

FD: I don’t remember when that was. I performed in a talent show in elementary school so probably super nervous and ready for dinner. First live performance as Father Dude?  I’ve had a few iterations (I was in a band Smokey Robotic) but first solo? Feeling validated.

MM: What’s your favorite style of music to listen to, but never will play?

FD: I love metal, jazz and R&B-influenced country. However I will find a project for some of these one day.

MM: What song/songs are your favorite to play live?

FD: I really love what I’m doing now because it’s a nice balance of collabs and the original material that I’m about to release as part of my new EP, The Balance.

MM: What was it about music that made you want to create it yourself?

FD: I don’t think it was a conscious decision. I just remember when I was 13, taking two cassette boomboxes and playing drums, recording guitar and keys with the playback one and eventually degrading audio quality enough to create a makeshift song. No computers so it was just this genuine desire to create.

MM: Who’s an artist you hope to work with in the future or play a show with?

MM: Did your parents always tell you to have a back-up plan in case things in music didn’t work out? If so what was yours?

FD: I went to a year of school (for music) but college wasn’t for me. I don’t think you really have a “back-up plan” when you wouldn’t be happy doing anything else. If anything, you adjust.

FD: Studio, bicycling (if possible), probably some kind of hustle, spending time with my girlfriend and cat, and endless hours communicating into a small handheld device.

MM: What advice would you give to someone who’s just starting out in music, or on the fence on whether or not to commit their life to it?

FD: There’s nothing I can say to change anyone’s mind. I’d just encourage them to keep going if that’s what they really want.  This business isn’t easy.

FD: Continuing the privilege to make music that people want to hear and meet more of the fans that support me. That and getting to show the world these new projects I’ve been working on.