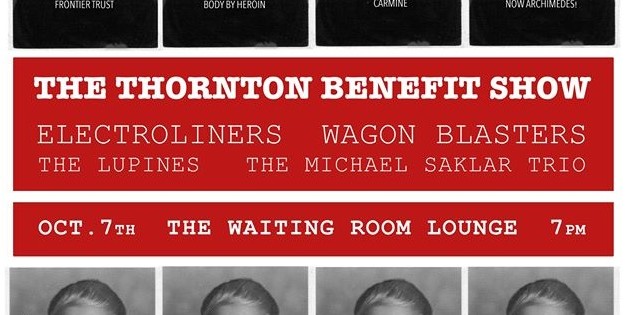 As the scene often does when a member of its own is in need, four Omaha bands will come together tomorrow to stage a benefit for longtime Omaha musician Robert Thornton.

The Electroliners, The Lupines, The Michael Saklar Trio and Wagon Blasters will play a concert at The Waiting Room tomorrow to assist Thornton’s family with medical bills and expenses. Thornton is currently suffering complications stemming from an operation in January, and has been away from work for more than six months.

Thornton has been an Omaha scene fixture in many facets for years. In addition to playing in Wagon Blasters, Students of Crime, Now Archimedes! and many more, he recorded and mixed Simon Joyner’s 1993 release Room Temperature. Thornton was also an influence on the booking scene in the 1990s, and was heavily involved with the now-defunct Cog Factory.

Tickets to the 7 p.m. show are $10, with proceeds going to the Thornton family to help pay medical and other expenses. RSVP here, and buy tickets here.

In singer/songwriter Cory Kibler’s first release in eight years, loneliness sits in the pit of your stomach.

“It’s The Only” dances painfully around the emptiness and its potential cause. It’s like waking up and not immediately recognizing your surroundings, except they’ve been the same day after day in an attempt at fill the void. The gut punch is that the subject goes through these motions “to kill time,” though there’s no resolution in sight.

Kibler’s delicate alto and a guitar/keyboard slowdance serve as the antacid that softens the pain. The songs on forthcoming album Dreams Really Do Come True color anxiety, frustration and loneliness through a humorous lyrical lens similar to Barenaked Ladies or of Montreal, using pop melodies much like Belle and Sebastian.

For Kibler, formerly of Robot Creep Closer and now a Colorado resident, Dreams Really Do Come True is the first solo album since 2007’s The Silent Woods. Dreams was recorded with Matt Wisecarver in Omaha, and is expected to release later this year on Mr. Furious Records.

In the meantime, hear “It’s The Only” below, as well as additional tracks here.

Tonight, dubstep producer Borgore comes to The Bourbon. Born Asaf Boger in Tel Aviv, Israel, Borgore incorporates many heavy metal elements into his brand of dubstep — which he calls “Gorestep” — influenced by his run as drummer of Israeli deathcore band Shabira. He is also credited by some as the catalyst for Miley Cyrus’s sound change (which we’d know nothing about, really). Styles&Complete and Bad Royale will open the 7 p.m. show. RSVP here.