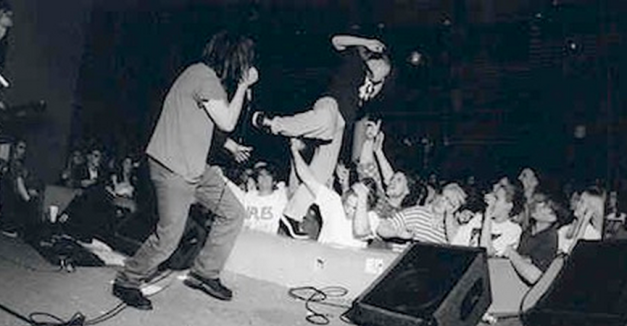 The secret can now be told, though many of you guessed it already:

Legendary Omaha ’90s punk bands Ritual Device and Cellophane Ceiling are both reuniting for a one-time-only show Dec, 26 at The Lifticket Lounge, er, I mean The Waiting Room. The event is a Main Vein Production. Main Vein was a promotion company run by Ritual Device frontman Tim Moss and Cellophane Ceiling frontman John Wolf back in the ’80s and ’90s. MV brought some classic bands to Omaha, including that famous Nirvana show at the Liftiicket Lounge in 1989.

“I always said if John Wolf put Cellophane back together, I would do it.” Moss said about a Ritual Device reunion.

The line-up for Ritual Device will be Tim Moss on vocals, Jerry Hug on bass, Mike Saklar on guitar and Eric Ebers on drums. The line-up for Cellophane is John Wolf on guitar and vocals and Chris Sterba on bass. Moss says original CC drummer Steve Coleman is unavailable, so I’m not sure who will be handling the sticks.

Is this a big deal? Yeah, for a lot of us, it is. Ritual Device was part of the golden era of Nebraska rock music that influenced the bands that would eventually form Saddle Creek Records. RD was among the first area bands that did extensive touring outside of Nebraska in the early ’90s, along with acts like Frontier Trust, Mercy Rule, Mousetrap and Sideshow.

Here’s how I described Ritual Device way back in ’97:

Ritual Device was a tortured, monolithic punk rock band whose sound had been aptly described as “gutter groove.” Ritual Device made perfect background music for your typical serial killing or perhaps high-speed chase through a bombed-out Beirut neighborhood. The closest comparison? Maybe the Jesus Lizard meets Ministry with a little Nine Inch Nails thrown in (without the synths, of course). It was violent music, scary.

Cellophane Ceiling was a precursor RD. “Cellophane was a bit older,” Moss said. “They bridged the gap between the band generations. They were my influence.”

Check out this Cellophane Ceiling video from 1987 directed by Dickson Lebron.

And below is a video of Ritual Device from 1994, shot at the legendary Capitol Bar and Grill a few days after Tim Moss broke his collar bone. Moss is a bit restrained here, but you get the gist.

Moss said Main Vein has yet to determine who will open the Dec. 26 show, but there will indeed be a third band on the bill. More information to come.