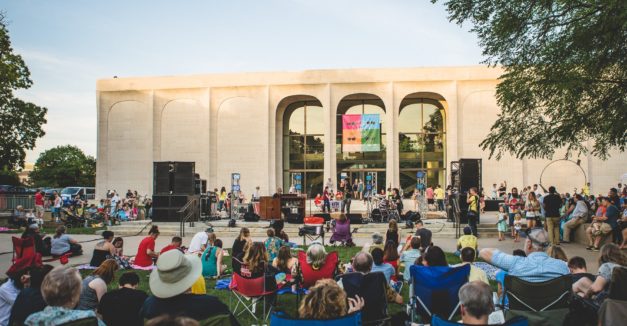 Part of what makes Hear Nebraska’s summer concert series fun for us is introducing audiences to music they might not have heard before or sought out themselves and watching the results unfold before us. But with this year’s Hear Grand Island, with the help of Knife & Fork Productions, the tables have been turned.

Unforsaken Allies, this week’s Hear GI headliner, is admittedly new to us, though they’ve been around for five years and endured a lineup change at drums. The natives of the Central Nebraska city take heavy influence from the likes of Alter Bridge and Foo Fighters and mix in lyrical themes both personal and universal.

We had a chance to catch up with drummer Mark Means before Unforsaken Allies takes the Railside Plaza stage for this Friday’s concert, which starts at 7 p.m. (RSVP here). Read our interview below:

Hear Nebraska: I don’t believe we’ve had a chance to catch up before now! Introduce us to the band: when did you form and how?

Mark Means: We are Abby Necker (bass and vocals) Diane Means (guitar) Mark Means (drums), and are all from here in Grand Island. About 5 years ago, [Unforsaken Allies] started off as an all girl band, and the then-drummer then moved away to Tulsa. I took over on drums.

HN: What are your major musical influences?

MM: That’s a pretty “all over the place answer”, we all have pretty varied tastes. Ranging from  classic rock to 90’s alternative,metal etc. if it’s done well we are fans. We love Flyleaf, Alter Bridge, Foo Fighters, a lot of 80’s and 90’s bands.

HN: The band has just completed its first EP, and from what we’ve heard so far it has a very inspirational tone. What was the process like?

MM: In April, we went in to Black Diamond Recording in Lincoln for our first studio time as a band. Ended up being a great experience, we can’t wait to get back and do it again. It’s a pretty surreal feeling hearing something you have worked so hard on played back to you for the first time.

HN: What are some of the major themes we can expect?

MM: Aliens, Zombies, Ninja’s, you know the basic themes … Seriously though, most of our songs are written from personal experiences or observations from everyday life. Families, relationships … you know, stuff.

HN: As Grand Island residents, what can you tell me about the city’s music scene, from your point of view?

MM: I would say it has struggled for quite a few years, it can be difficult to find a venue that is interested in having original music. We occasionally play some covers that we love, but our focus is on our originals. Hear Grand Island has provided an excellent opportunity for bands just like us to play to crowds that are expecting to hear original local bands and artists. The feeling of walking around last year during the Hear GI Friday nights was pretty amazing, and this year has already shown to be even better!

HN: Give us one funny or interesting or captivating on-stage moment that sticks out from your time as a band.

MM: Pretty much every show provides an opportunity for some type of mistake, being out of tune, breaking strings, dropping sticks or the dreaded “my mind went blank” stories. One thing we love to do is get time together after a show to self critique and then laugh about what went wrong. Last summer, we were just hours away from leaving for a festival in another state, when our friends who were also playing the festival called to warn us they were not being paid in cash, but were offered a blue heeler puppy as a substitute payment (no puppies were mentioned in the contract). So we avoided an issue there, but also missed the chance for a cool puppy! I think the ability to laugh at the different problems and move on is pretty key to staying happy as a group. (P.S. We did not play the festival).

MM: Cultivating art in our local communities is such a powerful thing, Nebraska has a tremendous amount to offer without having to feel like we need to copy someone else’s scene. Having the support of Hear Nebraska and Hear Grand Island is empowering! As much as we love playing for Hear GI, we also are huge fans of attending every week and checking out the other bands. (Insert plug for our buddies, Hall County Incident, who play July 14th at Hear Grand Island).

A traditionally responsive, acreage-sprawling Jazz in June crowd must have suffered a temporary lapse in focus as LaFrae Sci and Sonic Black leaned into one of its soulful mid-set numbers. Vocalist Tamar-Kali began a call-response verse that paid tribute to a Willie Dixon philosophy: the blues is the roots, everything else is the fruits.

Having widely participated in an earlier clap-along led by Sci from behind her kit, the crowd — probably upwards of 1,000 and certainly capable of echoing Tamar-Kali’s booming voice — had fallen flat. The vocalist coaxed them along playfully, saying when she returns to the band’s home base in Brooklyn, she would brag about how lively the audience was and how their passionate singing would prompt her to move here. But it would take their help. 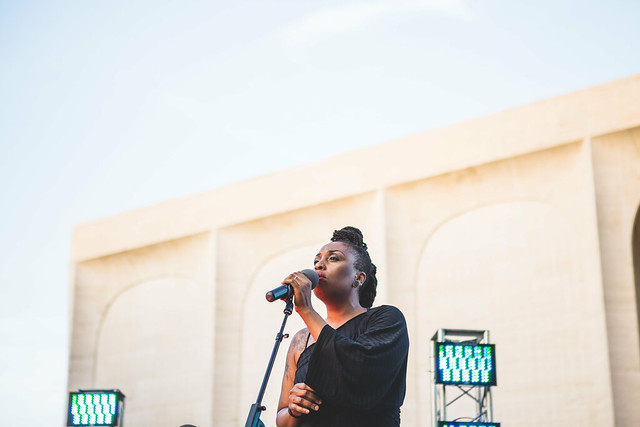 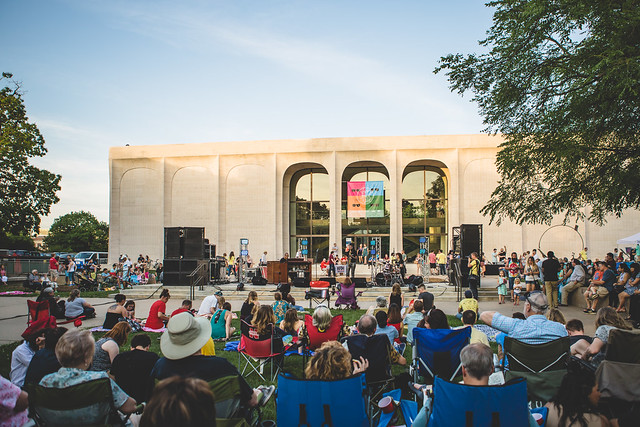 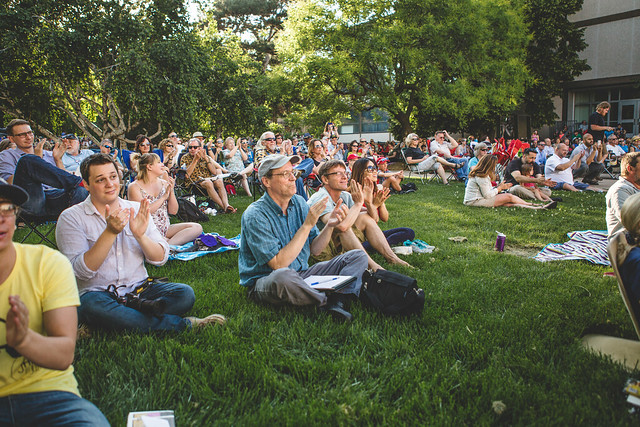 And so it was, as a chorus rose from the gallery and the Brooklyn jazz/blues band Sonic Black kicked off Jazz in June’s 26th season behind the Sheldon Art Gallery. The crowd stretched west from the gallery building across the lawn to Architecture Hall, and from the Lied Center to the Woods Art Building as bicycles and strollers wheeled through the intervening campus sidewalks and the smell of flowers and various food truck fare filled the warm summer air.

Sonic Black brought volumes of experience in both performing and teaching blues-influenced jazz. Sci, a vastly accomplished percussionist, anchored the set as it swung from a rhythmic Charles Mingus rendition to blues classics by Bessie Smith and Nina Simone to the band’s own groovy, key-bending compositions. Sci also spoke informatively about the band’s philosophy, blues history and their work around the world in an extension of the master class held earlier in the day Tuesday.

The band itself was simply spectacular. Saxophone player Lakecia Benjamin shined throughout, digging into both smooth runs and blasting solos and unearthing some dirty blues tone in the band’s closing number. Organist Greg Lewis was practically on fire, unleashing searing tones on that same song (as Benjamin fanned him with a t-shirt), deftly complementing those timeless blues numbers and, at one point, striking a devilishly powerful harmony with Benjamin during “Careless Love Blues.” Sci herself cut loose a few times, notably on the Mingus tune. In all, Sonic Black gave a special an intimate performance to launch what promises to be one of the best Jazz In June’s in recent memory.

The series rolls on every Tuesday in June, with music starting at 7 p.m. (and we recommend arriving early). See photos by Lauren Farris below: 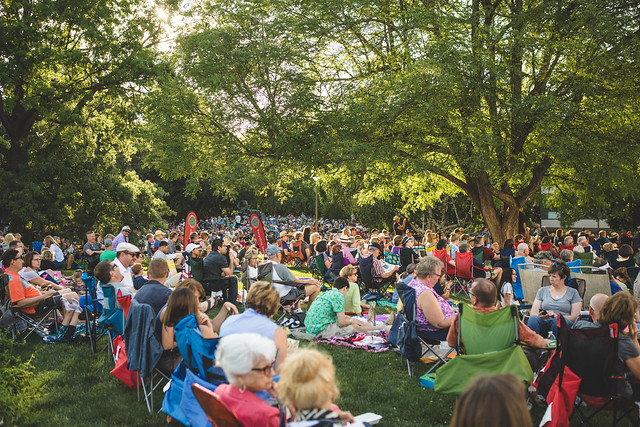 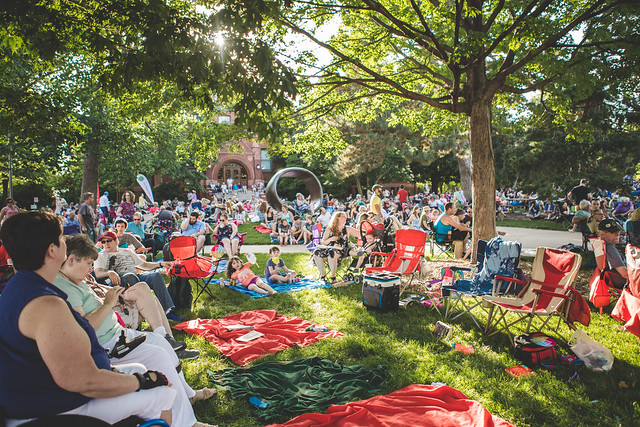 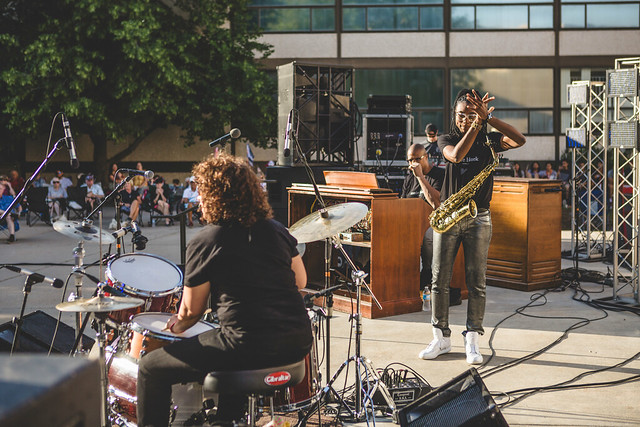 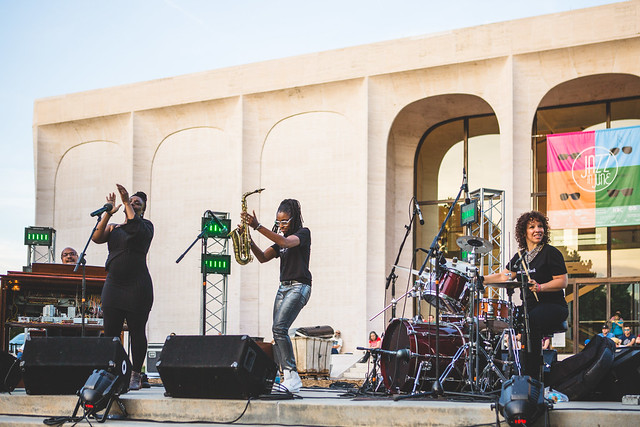 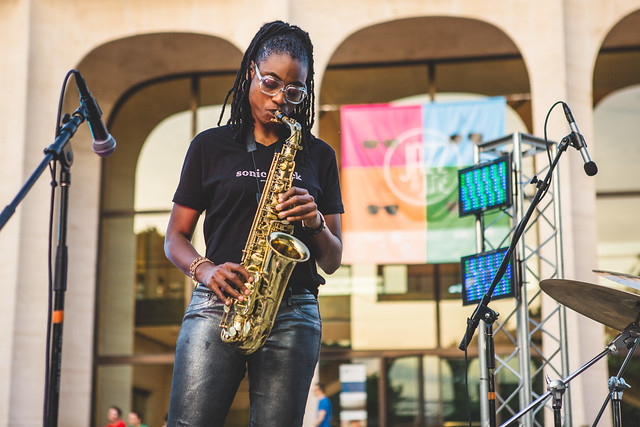 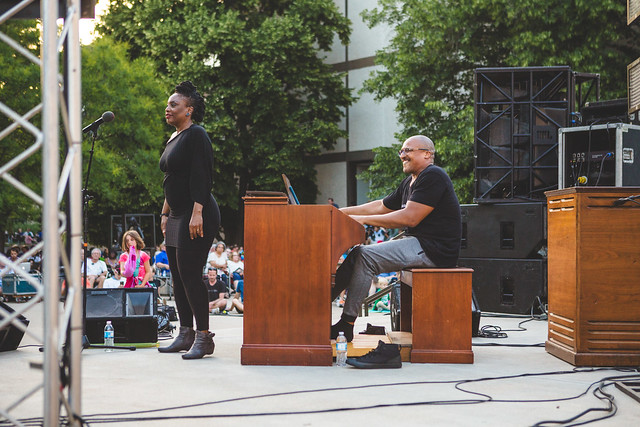 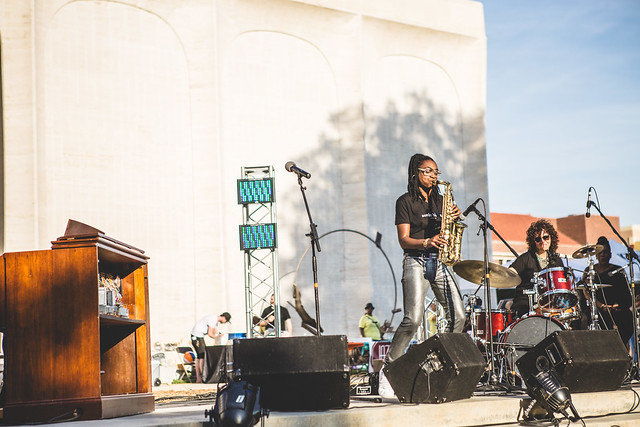 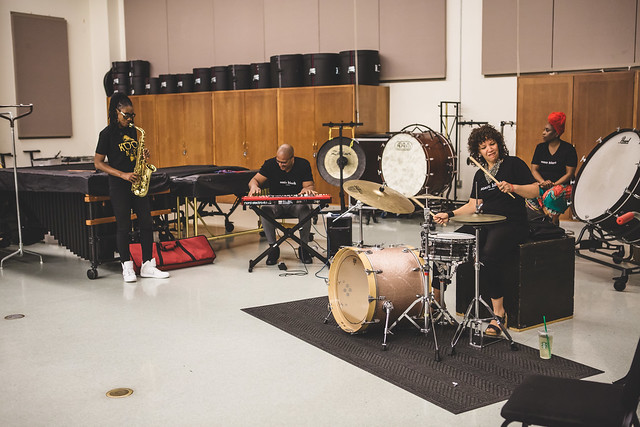 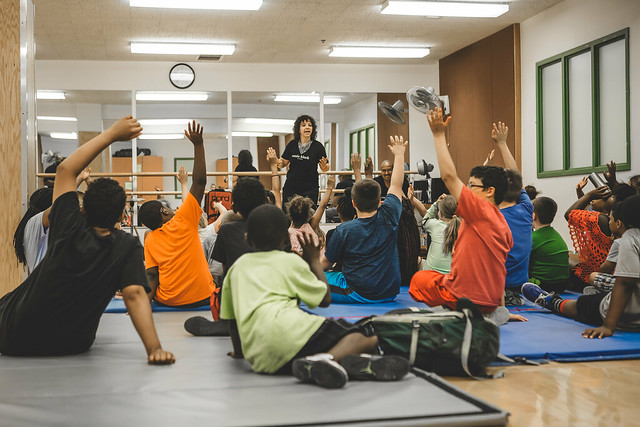 In April, the L.A.-based husband-and-wife duo of Chris Senseney (Big Harp) and Stefanie Drootin (The Good Life, Big Harp) premiered “Black Summer” as the first single of their newest project, Umm. On the track, the two-piece melds ethereal synth layering and Drootin and Senseney’s tight harmonies with crunchy guitar leads and cryptic lyrics about death and failure.

The couple announced on Monday Umm’s debut album, Double Worshipper, which is set to drop July 28 on Majestic Litter and premiered “I’m in Love” (via Lenny Letter), a fuzzy rock rager with harmonies that recall the days when Black Francis and Kim Deal were on good terms.

Along with the previously released, spaced-out “Oh Yes No,” the three tracks showcase a wide sonic palette that Drootin and Senseney are working with on the new record. Pre-order Double Worshipper here and have a listen to “I’m In Love” below.

With a record as simply titled as Stay Cool on the way (out July 14, Saddle Creek), it makes sense that the singles from Twinsmith’s latest effort would eschew the conventional indie pop of 2015’s Alligator Years for a more euphoric, good-vibes-only direction.

On Monday, GoldFlakePaint premiered “Boji,” the second single from Stay Cool, an ‘80s pop ballad with funky guitar flourishes and reverbed synth chords that beg for beachside blasting as the waves crash at sunset.

Check out “Boji” and take a look at Twinsmith’s upcoming tour dates with L.A. power pop band Rooney below.

David Nance discusses Omaha and his influences in profile with Noisey

Following last month’s All Songs Considered premiere of David Nance’s “Negative Boogie” single, the title track to his upcoming LP,, the press cycle for his (new album) continues with a feature of Nance at Noisey.

In the profile, Nance details his experiences in the Omaha music scene, his “self-indulgent” classic rock influences and the sounds he was shooting for while recording Negative Boogie.

“I guess we were just trying to get it to sound like drugs,” Nance says in the interview.

Since April 20, KHARI has released a trio of promo singles in “The Platform,” “Kings” and “Power.” Each track features futuristic production with constant beat breaks and vocal samples that recall Yeezus-era Kanye West along with socially-conscious racially-charged lyrics that detail everyday life in the black community. On “Power,” the duo refers to growing up in an environment ruled by “pimps, hoes and crystals.” But while things seem bleak in “Power,” the track, and the other two previously released tracks, aim to empower the black community, because “what don’t kill us makes black stronger.”

Check out some midweek picks below and a fuller listing at our events page here. Add your own here and tell us what shows you’re headed to in the comments.

Diet Cig with Sports at Reverb Lounge – Alex Luciano and Noah Bowman have had one heck of a year. After touring North America, becoming summer music festival staples and releasing their debut LP Swear I’m Good At This, Diet Cig is back on the road with Philadelphia power pop band Sports. The tour stops at Reverb Lounge tonight. RSVP here. 8 p.m. $13. All ages.

12th Annual Pondstock at Lake Hedke – Pondstock kicks off its twelfth annual festival on Thursday. The three-day camping and music festival welcomes more than twenty bands to Lake Hedke near Trenton, Nebraska, with food options provided by Grinders, a food truck based out of Holdrege. The lineup includes headliners The Peculiar Pretzelmen, Whiskey Dick and Saint Christopher. Tickets to the festival on Thursday are $15, $25 on Friday and $25 on Saturday. Music starts at 6 p.m. on Thursday. RSVP here. 21+.

Pleiades & the Bear with Travelling Mercies, Burkum Boys and Brad Hoshaw at The Waiting Room – Omaha’s Pleiades & the Bear drops its debut self-titled full-length Thursday night at The Waiting Room. In April, the indie folk sextet released the album’s lead single, “Katsina,” a track that boasts soulful harmonies by a handful of vocalists and a bouncy rhythm that feeds off of the airy guitar and banjo plucking. Travelling Mercies, Burkum Boys and Brad Hoshaw open the show. RSVP here. 8 p.m. $7. All Ages.