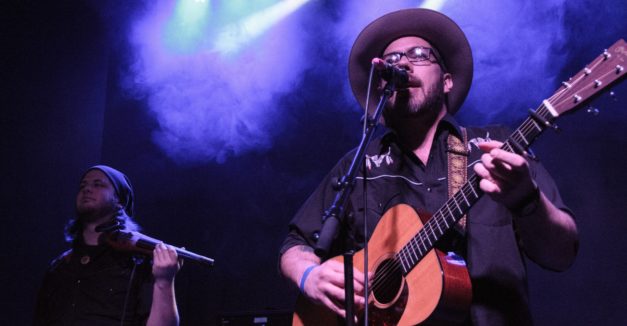 [The following interview previews the first Hear Lincoln concert of the 2017 season. Jack Hotel and Risky Clique perform a free show Friday, Aug 4 at 5 p.m. at Tower Square. RSVP here, and show up early for our watermelon-seed-spitting contest and fundraiser.]

Music is a visceral experience. Like a familiar scent it can transport listeners into a memory, a moment or a feeling. By connecting past, present and future, it leads listeners with its wispy, whimsical draw to the window sill on which it’s perched. The warmth that is baked into these morsels takes time and practice, like any worthwhile trade, and so, when done just right, one must go slow, savor and relish.

Lincoln folk group Jack Hotel’s music demands this deliberate attention of its audiences. Each track is rich in narrative that begs for a second, third and fourth listen. Named after a character found in Denis Johnson’s 1992 short story collection, Jesus’ Son, the group takes on its own rendition of literary lyrical musings, mixing the folkloric warbling of vocalist Günter Voelker with a crisp, cozy collection of violin, guitar, dobro and standing bass. The band’s sophomore album Voices from the Moon, a follow up to 2014’s Good Sons and Daughters, earned a win for Album of the Year alongside the band’s Best Folk Band award at the 2016 Omaha Entertainment and Arts Awards. Voices from the Moon calls on that sixth sense of musical storytelling to entice its audiences.

“When I listen to traditional or “roots” music (which is a broad, accepting term), I feel the weight of history,” Voelker says. “We have it in our DNA and I, at least, respond to it viscerally.”

Before kicking off Hear Lincoln this Friday, Voelker discussed with us the nature of Jack Hotel’s storytelling, how Voices from the Moon came together, and folk music’s connection with its audiences.

Hear Nebraska: The group’s name originates from a character found in Denis Johnson’s 1992 short story collection Jesus’ Son. What was it about this character that sparked interest for the band’s own identity?

Günter Voelker: The character Jack Hotel floats around the periphery of Jesus’ Son, and he’s always in trouble. When we started the band, I was writing a lot of character-driven songs about people in trouble. I chewed on the name for a few days before committing to it, but the truth is I loved it right away. When I play a solo show, I can say, “I’m Jack Hotel.” When we play as a band, I’ll say, “We’re Jack Hotel.” The name sounds “good” right away—to me, at least—and a person could just accept it, but it also sounds kind of odd, and I like that it could send you on a process of discovery.

HN: Because of your literary writing style, do you find yourself writing songs in order to build somewhat of a cohesive narrative, and if not, how do you go about organizing an album or a live performance?

GV: I don’t think all songs are stories; sometimes they’re just moments or reflections or even moods. As I write new songs, I don’t think about whether I’m creating a narrative. I’m not sure I could write that way. When my songs go together, I think it’s mostly luck, and because I wrote them. Of course, when the time comes to organize an album, we do put some thought into grouping them. With Voices from the Moon, the act of naming the album helped to create a framework.

HN: There is a delicate, vulnerable element that lines the insides of your tracks. What would you say is unique about the intimacy found in Country Blues music when performing live?

GV: Thanks for the good words. We’re not strictly Country Blues, but that style absolutely informs ours, and I guess when I listen to traditional or “roots” music (which is a broad, accepting term), I feel the weight of history. We have it in our DNA and I, at least, respond to it viscerally.

HN: While your first album, Good Sons and Daughters, was written in a folkloric fashion, Voices from the Moon encapsulates a more personal aura— the album was even recorded at your home to make the process more comfortable. What drove you take this route and incorporate songs like “Memories of Flying” in which you describe childhood memories?

GV: You’re right that there is a difference between the two albums, and that Good Sons and Daughters is more story-driven, but I still think most of my songs are about people in trouble.  Even “Memories of Flying.” Choosing to record at home did seem appropriate for this batch of songs, but it was also a practical decision, because we wanted to be able to spend the time to get it right.

HN: Experimentation of sound and style was very important to the development of Voices from the Moon, as you’ve briefly described before to Hear Nebraska regarding songs such as “Two Bar Town”. What was the trial and error process like for the band and is there anything on the album you wish you’d had more time to play with?

GV: For Voices from the Moon, I recorded guitar and vocals first, at the same time. Then Joe Salvati, our steel player and my co-producer, and I listened to those recordings obsessively, trying to imagine an album version of each song. We didn’t necessarily want to be bound to the versions we’d been performing live. We wanted the record to have its own energy. As more tracks were added, we continued to listen and make notes. There’s nothing I wish we’d had time to add, but there might be a handful of things I wish we’d had time to tweak.  (I’ll keep those specifics to myself!)  In general, though, I’m really proud of it, and happy with it it as a reflection of our band right now.