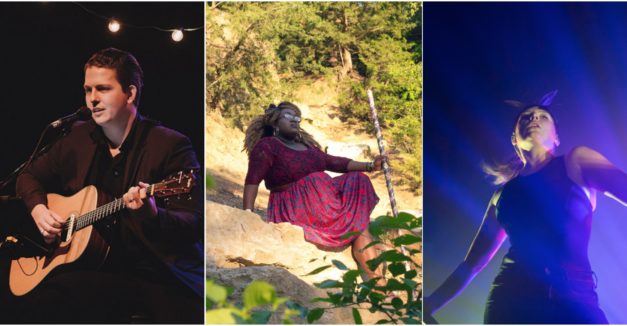 As one might imagine, most of the world’s stories are never truly told. They exist as small, untraceable specters that leave only the faintest reminders: those moments in which words perch at the tip of your tongue but never leave, or a surge of joy gone as soon as it is consciously realized.

These are the shared, unsung experiences that Evan Bartels is dedicated to conveying in his music. Together with Americana band the Stoney Lonesomes, Bartels’ warm vocals dance between the soft, soothing guitar, keys and heartbeat of the drum that moves each track. Bartels’ debut full-length The Devil, God and Me, out Sept 23, chronicles some of the Omaha songwriter’s own demons and decisions.

“This record portrays what it’s like to have sort of the classic tale of struggle, grace, and some form of redemption,” Bartels says.

Before Evan Bartels and the Stoney Lonesomes take to Tower Square this Friday for Hear Lincoln, its bandleader was kind enough to exchange emails with HN about his recent travels, love of storytelling and spiritual inspirations for the album.

Hear Nebraska: You’ve been touring a lot recently, with both your blog and Instagram speaking to your reflections on being isolated on the road. How does this time affect your music?

Evan Bartels: Alone time definitely adds lots of time for introspection which is something I rely on for my writing. When you add new cities and new experiences to the mix every single day without having someone to share it with it pretty quickly starts to get processed through writing.

HN: How do live performances fluctuate and adapt between playing with the Stoney Lonesomes and when you play solo?

EB: Whether it’s with my full band or when I’m playing solo, I always try to make the story in the song the most important part. The band definitely adds a lot to the music but when I play solo I’m more likely to try newer songs out that I’m working on and try to flesh them out on stage.

HN: You’ve mentioned the song “Shallow Water” stems from a mistranslation of Nebraska’s etymology, the actual meaning being “flat water”. Even so, how would you say the imagery spoke to your interpretation of the state’s identity and your relation to it?

EB: To me that song speaks to all of the people like myself who’ve always wanted to travel outside of Nebraska but still love the landscapes and culture here. The first line in the song, “ramble on, you restless heart, cutting in like a wind coming down from the north,” was written with that in mind. The desire to be a nomadic person but have pride in your home and the relationship between the two.

HN: In your song “Send My Love to New Orleans” you speak with an affinity for the city and its complex nature. With the city being such an iconic fixture in music culture how would you say it connects with your own work?

EB: New Orleans connects with me simply because the first time I went there I was 16 years old and it changed my life. I was there for two weeks with limited supervision so I took as much time as I could to go off by myself and explore, even sneaking out of the hotel late night / early morning. Being in that city in my formative teen years had a huge impact on me and every time I go back it’s like visiting a past lover or an old friend.

HN: The group’s debut album The Devil, God, & Me has some obvious biblical themes. Faith plays a large role in your music but what led to the decision to use it as the framework for the group’s first release?

EB: I wrote this album about me and my life’s experiences so far and finished writing it about two years ago, but it was a long process to complete it because I wanted it to tell a story. Not just a story in each song but the overall arc of the album. I grew up a Christian in the Lutheran Church and as I’ve grown and learned and thought and studied scripture and religion as well as other religions I’ve reimagined and reformed my ideas of faith many times over. I think this record accurately portrays what it’s like to have sort of the classic tale of struggle, grace, and some form of redemption. It’s called The Devil, God, & Me simply because that’s who it’s about.

Edem K. Garro, aka Edem Soul Music, seeks to connect the mind, the body and the soul to the sounds that have surrounded us since before we developed consciousness in a special performance, named African Body, Soul & Music, at KANEKO on Friday, Aug 11.

“We will simply guide people to think through sounds that may have existed at a certain point and time,” Edem says.

Through only vocals and percussion, the music, which Edem composed herself, draws on the simplicity of human connection and feeling. From there, the identifiable sounds will connect to a storyline that takes the audience from past Africa to today’s America, weaving itself through the affective sounds that link Edem’s roots as a first-generation American of Ghanaian descent to the audience and its present reality.

“This production is dedicated to reaching all demographics, all socio-economic backgrounds and all walks of life,” Edem says. “I want people to think about their surrounding environments and how they’ve been shaped by them.”

A discussion will follow the performance, and Ghanaian food will be served. Find ticket information and more here.

If you were first introduced to rapper J. Crum via his 2016 full-length record Black Sheep, you heard a man emerging explosively from years of searching. His confident, scathing tone is his strong suit, the nu-metal vibe behind him as crushing and epic as the journey itself. Nestled within the album’s dark heart are morsels of soul and funk that give it human brightness: the poetry of “Hearts Collide Interlude” and the jazzy piano of “Pages.”

Flawed, Crum’s latest EP, pulls those elements forth while maintaining and harnessing the relentless energy from its predecessor. Aided by Make Believe’s Rick Carson and producer Tory Hooks, the Omaha rapper channels Tupac in the album’s first track, slipping into a laid-back delivery over a smooth groove. Features from Jus B and Allison Nash give “Called” and “Ashes” a tinge of soul.

But J. Crum’s strength is in the banger. He roars like an engine on “Called” and growls on “Monster.” The message is positive but the journey has been riddled pains he now owns. In the end, he’s grateful, “made to worship,” undeserving. Flawed makes for an interesting blend of rhythmic aesthetic and redemptive attitude, both as blinding as the light above.

There is also an associated video project in the works, the first installment of which dropped this week. The six part series continues every two weeks; watch “Intro” below.

Since dropping his LP EXISTintoENCE in May, Lincoln rapper HAKIM hasn’t stopped on his quest to the top of his rap game, releasing the collaborative single “Day Off” with New Jersey rapper Fatboy SSE and spitting on top of an ice cream truck in the “Flavors” music video.

HAKIM debuted the music video for the penultimate track on EXISTintoENCE, “Clouds,” on Monday, taking viewers through a day in the life of the rapper, chilling with his infant son, buzzing flat tops at his barbershop and hitting the studio at the end of the night.

Check out the “Clouds” video, directed by Christiann Gilchrist, below.

Also in music video news, fellow Lincoln emcee Sleep Sinatra recently put out a video for his song “Phenomenon,” which appeared as the third track from his April EP, Thrift Store Lo.

Over a plodding piano-driven instrumental, Sleep spits bars about understanding God’s role in life’s twists and turns and growing up from the kid with Nike Air Force Ones and baggy jeans. The video, directed by Michael Clement Reed sees the rapper perusing through the bins at a local record store, performing at The Bay and on a roof in downtown Lincoln and posting up around the University of Nebraska-Lincoln campus. Watch the video below.

The Way Out hosts HN Benefit this Saturday

This Saturday at The Commons LNK, Ashland indie rock trio The Way Out is graciously hosting a Hear Nebraska benefit show with a mix of young Nebraska acts, including Bach Mai, Histrionic and CJ Clydesdale Band. As part of a raffle featuring prizes from Relentless Screen Printing, Salt Creek and Mad Dog and the 20/20s, HN is pitching in a copy of the HN Compilation Vinyl, Vol. 3, a bundle of Good Living Tour merch and a pair of passes to Lincoln Calling. Find more information about the show and RSVP here.

Check out Martin’s photos below: 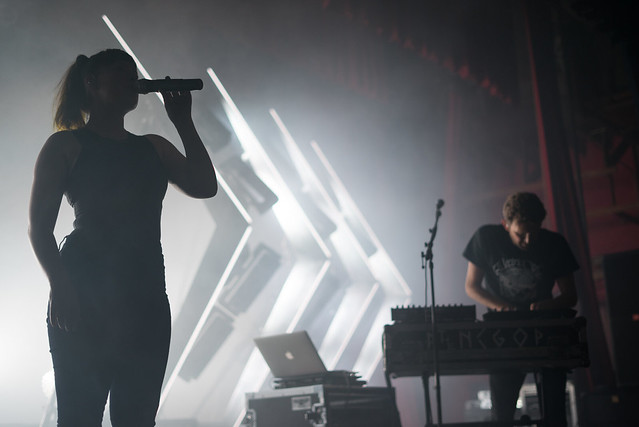 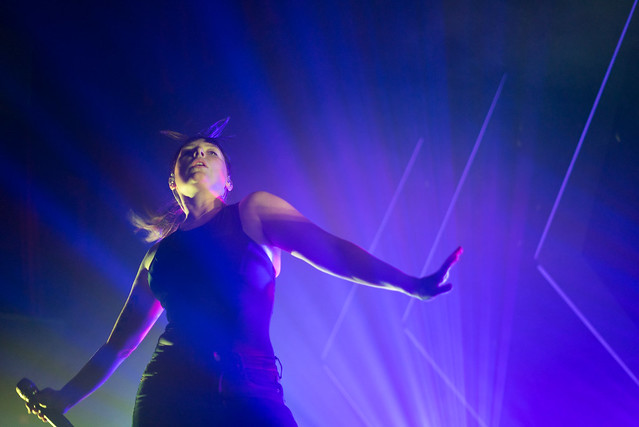 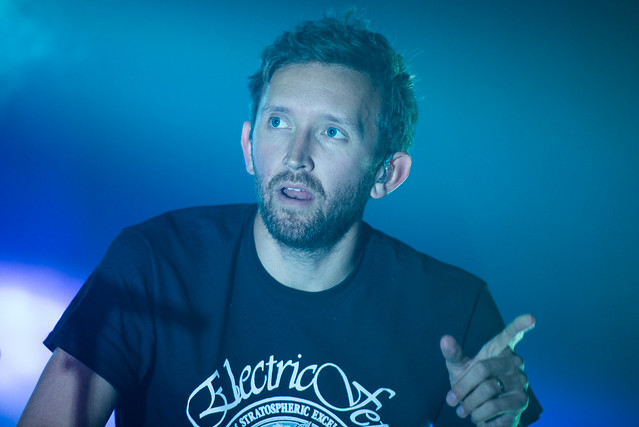 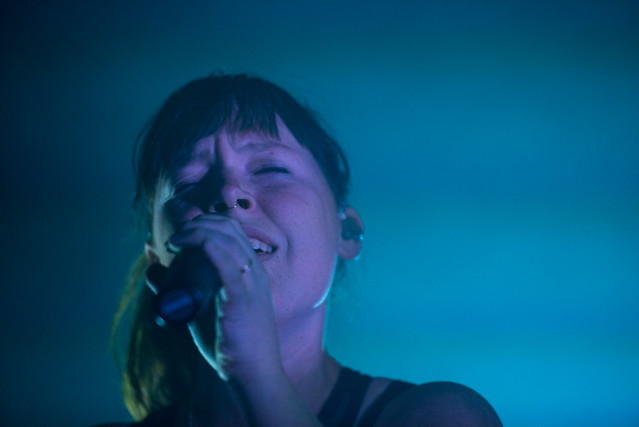 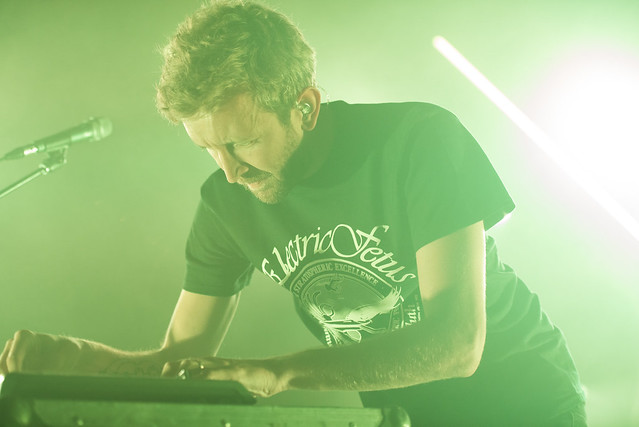 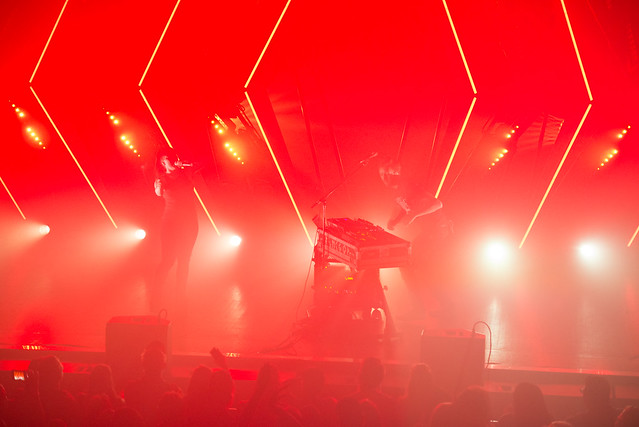 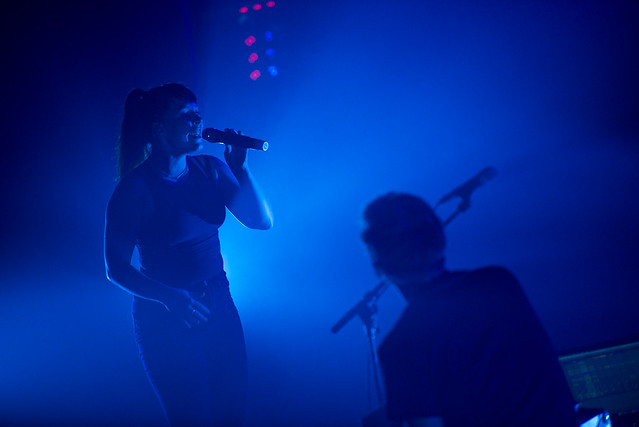 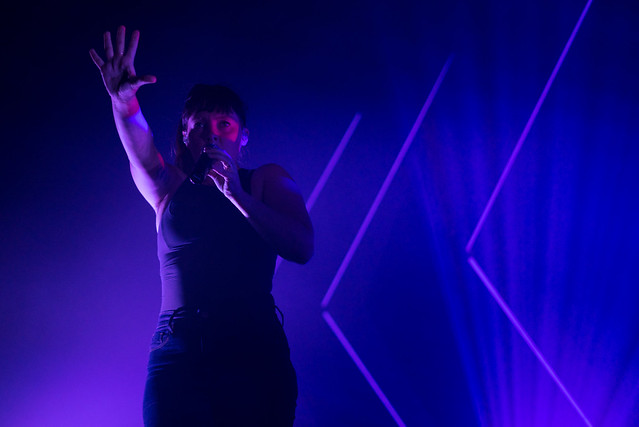 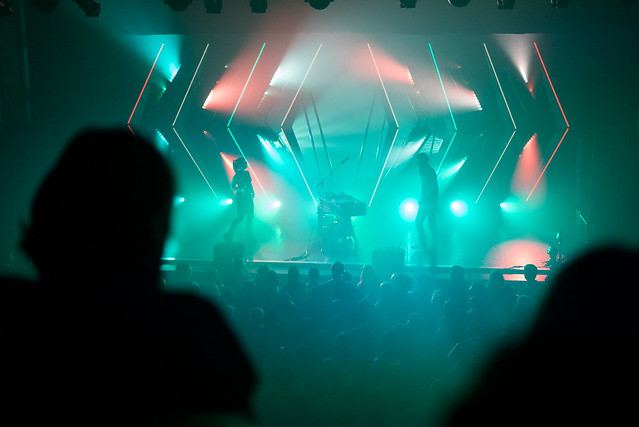 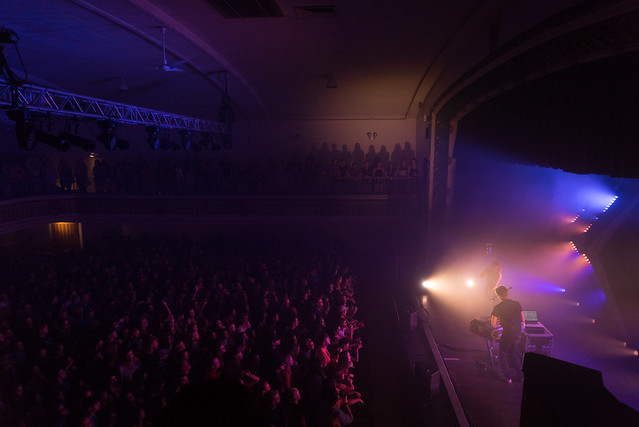 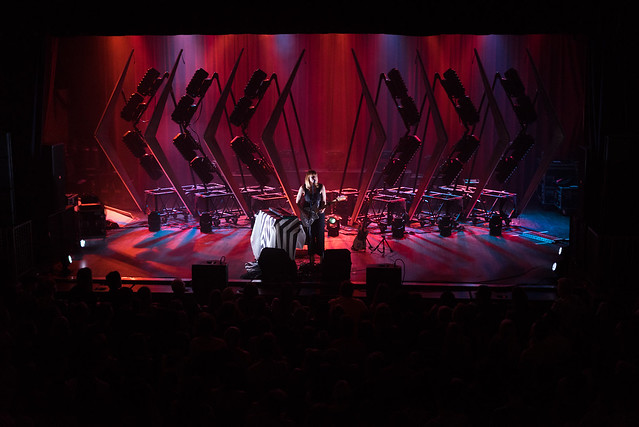 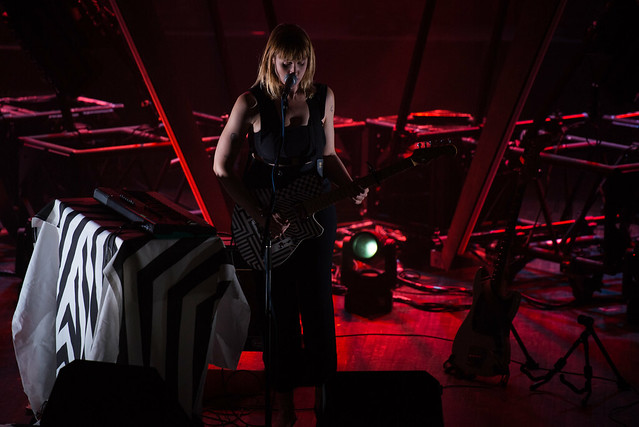 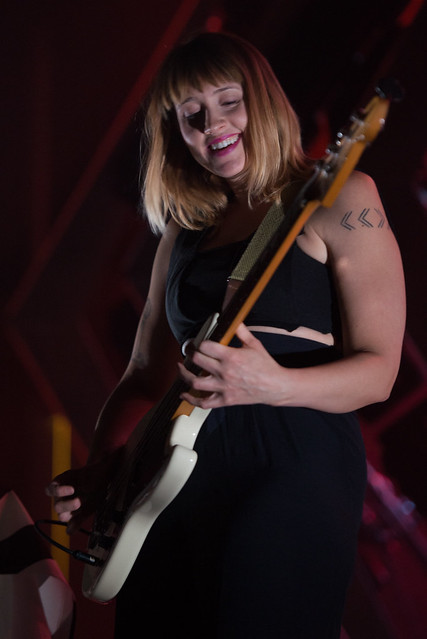 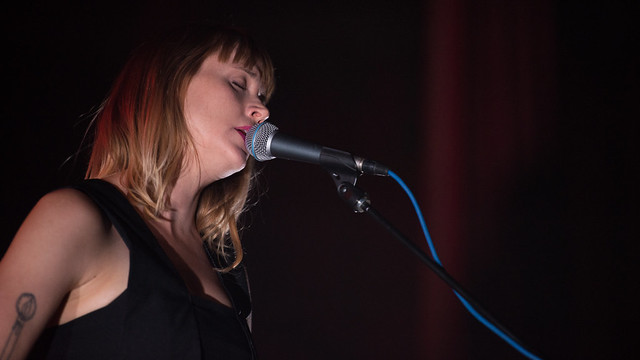 Take a break from the hectic work week and check out a show today or tomorrow. Take a look at our picks below, and head over to our events page for an even more comprehensive list of shows. If there’s something missing, add your input with our contribute feature here.

Taking Back Sunday with Every Time I Die at The Bourbon – Last fall, emo titans Taking Back Sunday returned with their Tidal Wave LP, which saw the band fusing its alt-rock roots with the sounds of Bruce Springsteen and Tom Petty, creating a blend of emo and heartland rock. The band stops in Lincoln on tour tonight, and they’re bringing New York metalcore mainstays Every Time I Die, which released its eighth full-length Low Teens last September. All Get Out opens the show. 7:30 p.m., $32, all ages. RSVP here.

Keith Harkin at Reverb Lounge – Irish acoustic pop troubadour Keith Harkin kicks off his summer tour tonight at Reverb Lounge after releasing his second solo LP, On Mercy Street, last year. The songwriter got his start back in the late aughts with the vocal group Celtic Thunder before going solo in 2012. See his video for “Mercy” below. 8:15 p.m., $35. RSVP here.