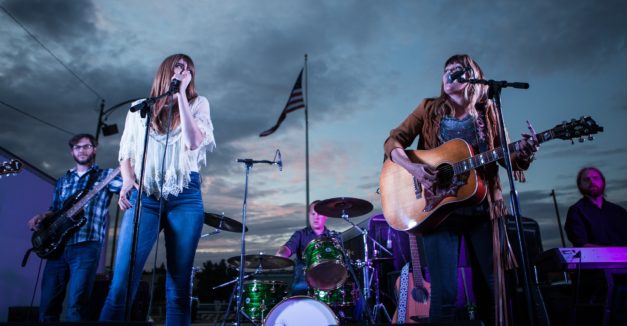 Q&A: Belles & Whistles on finding your voice and directing your passions

In 1999, Belles & Whistles vocalist/guitarist Jaymie Jones and her sisters toured the US and Europe with their harmony-driven acoustic pop folk group Mulberry Lane. As fate would have it, their record label folded, which left the band’s players in limbo. But who knew then that, for Jones, the path back to Nebraska would lead her to not only start a family, but to continue her musical legacy within it.

When Jaymie’s daughter, Kelli, was in her early teens, she began to perform backup for her mother to liven up her summer. Perhaps because of their signature and natural ability to harmonize, it clicked. The two formed the group Belles & Whistles, with Jaymie handing the lead vocal over to Kelli shortly thereafter. They began recording and touring together, opening for various country big-hitters including Brett Elderidge, Lee Brice, Old Dominion and Kenny Rogers.

Sometimes mixing business with family really works. For Jaymie, those bonds are vital.

“You have to love what you do, and the people you’re creating the music with,” Jaymie says.

Belles & Whistles recorded their first EP, Look Up, in 2016 and are currently touring Greater Nebraska. Before the ladies take the Railside Plaza stage for Hear Grand Island this Friday (RSVP here) they took a minute to chat with Hear Nebraska about creating music as a family and the importance of using your voice to shape your passions.

Hear Nebraska: You’ve mentioned on your website that it was originally Jaymie that sang the lead in your duo. What sparked the switch? And for Kelli: how have you taken to that role?

Kelli: Well, when I first started singing, I sang backup to my mom, so I learned harmony and focused on blending with her. Then as we started working as a duo, she started giving me a few leads to learn how to sing lead, and she sang the harmony. We felt, on-stage, that it worked better when I was lead because she’s on guitar, and I’m able to work the stage. We also were writing a lot of songs and I started to have more of a voice in our songs, so it made sense that I’d take the lead on those from my perspective. When we went in the studio to record our EP, I really had to learn how to create a commanding lead vocal, and I think that was when I realized how much I love singing lead. Also, my mom loves singing harmony, and she says she loves to watch me shine, so it all worked out perfectly.

HN: Belles & Whistles co-wrote and recorded a batch of songs in Nashville with producer Dan Frizsell. What was that experience like and how do you feel it benefited the songs?

Kelli: We recorded at Legends Studios in Nashville, and Dan is a great producer. He brought in some amazing studio musicians, and everyone really collaborated to bring the meaning of the songs across. There are loops in “Fire,” but “Luna Blue” is very organic. On “Look Up” they used a timpani on the choruses.  It was a very exciting experience.

HN: Jaymie, you’ve been performing music and touring in some fashion for two decades. How has that informed what you’re doing with this band? What’s the most important thing you’ve learned about making music?

Jaymie:  I have so many responses to those questions, I feel I could write a book! But a couple things stand out, and that is you have to do the music you love, from your heart, for all the right reasons. You have to love what you do, and the people you’re creating the music with. If you’re excited to go sing your songs to a hundred people in 99 degrees, then you’re doing it right. We stick to the idea that success is touching people’s hearts with our songs and harmony, the way our voices intertwine, the words and melodies we’re singing. If someone says, “Where can I get that song?” that means the world to us. I do believe that if you keep your goals to be creating music that people can relate to, that other things will fall into place. It’s easy to get caught up in all the side-jobs that come with playing music, but our focus continues to be our songs and how they are delivered.

HN: Kelli, how has the experience of being in a touring group — and with your mom — been as a teenager?

Kelli: I feel like my mom has all this knowledge she is passing down to me. So I feel really lucky.  She also knows so many people in the music community in Omaha, some musicians are like family to her. She also came from this musical group of collaborating with her sisters all the time, so she already knew how to give me space. I think that’s really important because you’re not going to agree on everything, and that’s ok, that’s collaborating. We never have any drama between us, we actually laugh a lot. I feel like she encouraged me to have my own voice in writing, and in decisions, because I’m from a different generation than her, and she wanted to make sure our project is equally both of ours. Most often she defers to me, and that’s pretty cool.

HN: If I understand correctly, a lot of the songs are written collaboratively between you two, what’s that process like when it comes to songs like “Princess” that seem to cover some uncomfortable topics?

Kelli: We wrote Princess also with Daniel Christian, who is a great singer/songwriter from Nebraska. You sort of just have to learn how to go into writing sessions and be super honest. Nobody is judging you in a writing session, because that wouldn’t make for very good expression, you just have to be super honest and trust the people who you’re writing with. We do co-writes a lot in Nashville now with writers we have never met before we walk into the room, and you just sort of have to force yourself to get comfortable and honest, and we leave everything in the room.

Jaymie: I think every kid should grow up thinking that music is a viable career option, no matter where they come from. There are so many genres of music that are great to create in, and explore.  Many songwriters are born in small communities really connected to the places they grew up, and especially in country music, the themes and feelings from places in rural American feel like home to many people all over the world. I think it’s a little bit like handing down traditions, folklore, the love of the land, to be able to create music from where you come from, and all the influences. My favorite author is Willa Cather, and I feel that her books and poetry influences me and my perspective on life. I think it’s very important and I hope our society finds more value in original music and expression.

The latest video from M34N STR33T mastermind and solo producer Adam Haug, aka Haunted Gauntlet, opens with the screeching of an orchestra’s instruments, climbing in pitch and volume until collapsing and giving way to a driving industrial house instrumental.

“Mine Dwell” is the second of a number of music videos Haug plans to release leading up to his forthcoming VHS/Visual Album following the title track “Blessed Possession,” which dropped in late May.

At its most discernible, the “Mine Dwell” video sees Haug playing along to the track on a guitar in a living room while wearing sunglasses and a yellow trucker hat with the words “Golden Oldie” emblazoned across the front. And at the video’s most esoteric, a goblin burns while papers go up in flames in a wastebasket. The visuals are intentionally distorted by VHS-quality TV fuzz throughout, ending with just the word “yee” before the screen goes dark. Interpret the video for yourself below.

In promotion for his upcoming Negative Boogie LP, Omaha eccentric David Nance and his band are heading out on a Midwest and East Coast tour from the album’s release show until August 6, with only one day off the entire tour.

Have a look at what’s going on in shows the next couple days with our picks below. Take a look at a more comprehensive list of events here, tell us which shows you’re headed to in the comments, and add your own shows to our events page with the contribute feature.

Jason Eady with Gabe Nelson w/o Pants at The Bourbon – Fort Worth-based country/folk vagabond Jason Eady hits the Bourbon tonight in support of his self-titled full-length, which dropped in April. The album is dominated by Eady’s classic take on country with bouncing rhythms and Eady’s subdued crooning. Lincoln Americana artist Gabe Nelson w/o Pants kicks off the show. 8 p.m. $8. All Ages. RSVP here.

Old Sport (CO) with Culture War and No Getter at Milk Run – Denver post-hardcore band Old Sport makes its first stop on three-week tour at Milk Run on Thursday night. The band dropped its debut LP, To Give, back in the fall of 2015, and they released a split with Colorado Springs post-rock band Autumn Creatures in September. Hardcore punk band Culture War and emo punk four-piece No Getter open the show. 9 p.m. $5. All Ages. RSVP here.