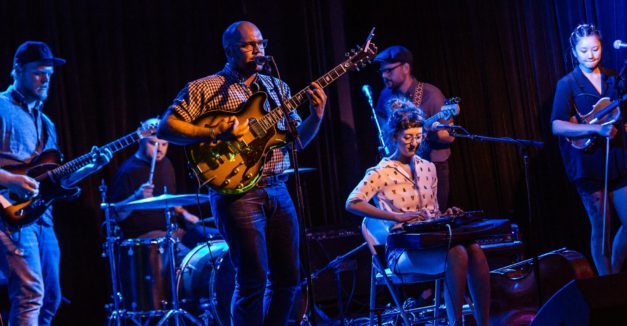 The album finds vocalist/bassist John Vredenburg screaming as if either on fire himself or trying to conjure it around him. The presence of Alex Kinnerk, his first recorded appearance with the band, is undeniable. He and John Laughlin (Montee Men) together build and resolve tension, pouring on the heavy and spitting weaving, acidic metal riffs. Drummer Pat Oakes (Ladyfinger) holds the turbulence in orbit.

Listen to both tracks below:

Today is the last day to apply for the Fall 2016 Hear Nebraska internship session.

We’re looking for enterprising, self-starting candidates for multimedia, editorial and marketing positions beginning August 29, 2016. Working both remotely and at either of our Omaha or Lincoln offices, you will help us cover, promote and present the state’s music community for 15-20 hours/week. Journalism, marketing or English majors are preferred, though others are accepted if they possess the essential skills. Find a list of qualifications and the application here.

Tonight, Des Moines singer/songwriter Dan Tedesco plays Duffy’s Tavern, 1410 O St, with Jens Lehman & the Time Cops and Scott Severin. As a one-man band, Tedesco released double album DT earlier this year in the midst of a regular nationwide touring schedule. Jens Lehman also released new music this year, his debut EP All That We Could Do. The show is $5, 9 p.m., RSVP here.

And tonight in Omaha, Minneapolis indie rock band We Are The Willows plays Reverb Lounge, 6121 Military Ave, with Omaha (the band) and Topher Booth. In April, We Are The Willows released Picture (Portrait) Part 2, which expands on the theme of the first album based on letters written by frontman Peter Miller’s grandfather to his grandmother while he was stationed in the Southwest Pacific during World War II. The show is $10, RSVP here.

Send all news tips, story ideas, song submissions and other info to news@hearnebraska.org.