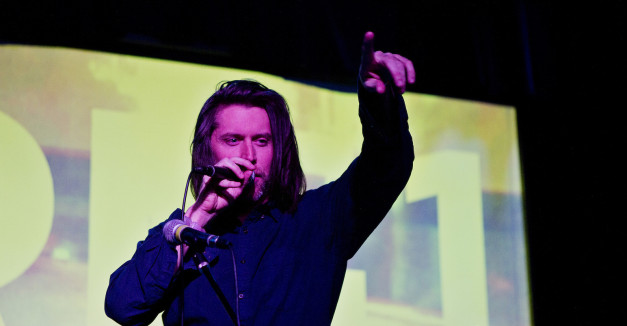 If you’re keeping a summer music calendar full of festival dates and marquee shows, you can fill in quieter Mondays and Wednesdays with some more intimate and free fare.

Pageturners Lounge announced its first annual summer concert series with free shows on Mondays and Wednesdays, June through September. See the full schedule on the poster below, but early highlights include The Felice Brothers and Rig1. Both touring acts are connected with Pageturners co-owner Conor Oberst. New York’s The Felice Brothers tour with Oberst this summer, including a sold-out stop at The Waiting Room. And Rig 1 is the hip-hop/rock project of Desaparecidos keyboardist Ian McElroy.

The schedule is chock full of notable local names, as well: Sam Martin, Simon Joyner, Oquoa, Pleiades and The Bear, monthly sets by The Burkum Boys and a notable plugged-in set from Super Ghost and Tie These Hands.

Pageturners is also holding a Tecate-themed guessing game through the summer. Entrants guess how many of the pale lagers the bar has sold in its entire existence, with the drawing on Sept. 5. The closest guess wins $500 cash and the runner-up wins 100 free Tecate’s. Taking a dive for second place almost sounds more fun.

The music video for Twinsmith’s “Said And Done” will get its world premiere this Friday evening in Los Angeles.

Omaha native filmmaker Gabriel Younes has entered the previously unreleased video into the Midnight Shorts block of Dances With Films, alongside seven other short horror flicks. In the Twinsmith video, a mysterious band of masked killers kidnaps a group of twentysomethings whose car has broken down during a joyride.

This year marks the 18th run for Dances With Films, an independent Los Angeles film festival dedicated exclusively to featuring unknown directors, actors, producers and writers. In 2013, the festival moved to TCL Chinese Theaters, where its one-week run will begin this Thursday.

If you happen to be in Los Angeles for the event, tickets are $12, and you can RSVP here.

Eli Mardock will compose an original score for the film, and Orenda Fink will cover an old spiritual which will also be included. Country singer/songwriter Jeremy Stark will perform an original song of his own on-screen and Omaha rapper Kieves McGaugh will act in the film, as well.

Endor will be the second feature film from Gum, who will co-direct with screenwriter Faustus McGreeves. In both of his directorial endeavors, Gum has been very inclusive of Nebraska musical and theatrical talent. His latest effort will represent a vast departure, genre-wise, from its predecessor.

Gum has launched an Indiegogo campaign to help with production costs, which you can give to here.

Grammy-winning New Orleans artist Terrance Simien will headline the daylong festival, to be held outdoors at the restaurant’s Fallbrook location and organized with the help of Red Rebel Media. The rest of the lineup should be extremely familiar to Lincoln folk, roots and blues fans; it includes Josh Hoyer and the Shadowboxers, The Bottle Tops, Tijuana Gigolos, Jack Hotel, Evan Bartels and Gabe Nelson.

Though Schilling Bridge winery and brewery has operated in Pawnee City since 2002, the Lincoln restaurant location opened in the Fall of 2014 on the strength of their craft beer and wine selection. The Pawnee City location was the first winery-microbrewery combination in the U.S. at the time. Manager Jon Schilling says that, on the restaurant side, they hope to pack their first summer with attractive events.

“What really set us apart from everyone else was the unique activities we’ve hosted throughout the years,” Schilling says. “We expect to bring the same enthusiasm and energy [to restaurant events] on a bigger scale.”

Beginning at noon Saturday, June 27, Schilling Bridge will serve burgers, pulled pork and craft beer and wine on the outdoor patio and near the stage south of the restaurant. Tickets to Rhythm & Brews are $12 in advance, and $15 on the day of the event. Visit their website here for more information.

Tonight, Luke Polipnick plays the fourth night of his Zoo Bar residency with Hans Sturm and Chris Varga. Polipnick has brought a variety of lineups and sounds throughout his run at Zoo Bar, and tonight will focus on his original jazz and post-jazz compositions. RSVP here.

There are a few shows around Lincoln and Omaha tonight. Check out our events page here for a full listing. As always, if you do not see your show or one you plan to attend, hit us up at news@hearnebraska.org, or add it via the Contribute button at the top of the HN homepage.