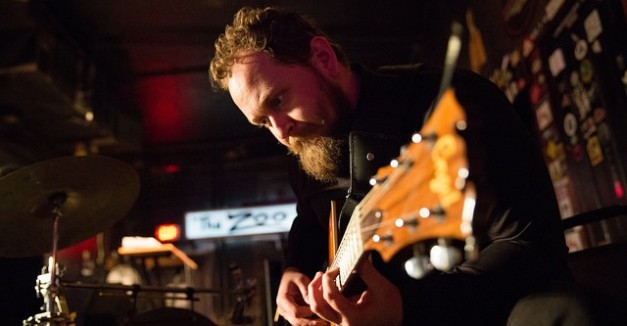 Omaha musician Mike Johnson considers himself of the rock band background, having drummed in the now-defunct Feel Tight and other rock bands. With some room to experiment, his hip-hop influences are coming to the foreground.

“I’ve never done production before, but have always been a huge fan of rap,” Johnson says. “I had been listening to a lot of electronic musicians — The Range, Jamie XX, Madlib, J Dilla — and began exploring how those beats are made.”

Johnson’s new electronic project ridgelines releases new self-titled EP Friday, and will unveil it live tomorrow night at Barley Street Tavern (RSVP here). He says that his drumming experience has helped him transition into working in a new genre, but that he’s only scratched the surface of beatmaking.

“It’s like learning a new language,” Johnson says. “I’m by no means a master and have a lot of learning to do, but it has been super fun to work on and grow into what it is.”

Johnson says that the best part about working on his current project is the sense of community in Omaha’s music scene. He says that’s helped blend his rock music experience with interest in hip-hop.

“Omaha’s music community can seem fragmented at times, but there a ton of cool people down to work on and contribute to whatever,” Johnson says.

Take his collaboration with Both’s Scky Rei in a remix of EP track “who taught you to hate?” Johnson says it came about organically. While making the track — an ominous beat with Malcolm X’s booming voice — Johnson heard Scky’s voice naturally.

“The song explores some uncomfortable feelings, but Skylar jumped right on it,” Johnson says. “He got where I was going with the idea and really took off with it.”

Hear the extended remix of “who taught you to hate?” below. Preview Johnson’s new EP at the ridgeline bandcamp page here.

Omaha art lovers have a chance to support the local arts community this weekend, as well as score a new piece of art.

The Union for Contemporary Art is hosting a two-night fundraiser event this weekend at Midtown Crossing suite 4107, capped by its $100 art sale Saturday afternoon. The event starts Friday night with a preview cocktail party at 7 p.m., featuring Small bites and desserts provided by The Grey Plume and La Charlotte-Caniglia Pastries and a performance by Tbd. Dance Collective. Patrons will have a chance to preview Saturday’s show, or purchase art early for $150.

Saturday will feature the full $100 art sale, with work from local and regional artists. There will also be several raffles, refreshments and, for a small donation, a chance to create work with local artists, from glazing a pot with Katie Temple and Sarah Jones to screenprinting with Josh Norton to hat making with Natalie Linstrom.

Tickets to Friday’s preview show are $25, and also serve as admission to Saturday’s art sale. Admission for Saturday alone is $10. Tickets can be purchased in person at The Union, online here or in person the day of the event. Learn more at the Union’s website here.

Tonight, The White Buffalo plays The Waiting Room with The Willards. The folk rock project of singer/songwriter Jake Smith, The White Buffalo’s dusty, gritty folk lays the perfect foundation for songs about rebels, outsiders and troubled souls battling through life’s obstacles. Smith has had six of his songs featured in the popular FX television series Sons Of Anarchy. His latest album, Love and the Death of Damnation, released Aug. 21 via Unison Music Group. Tickets to the show are $15. RSVP here.