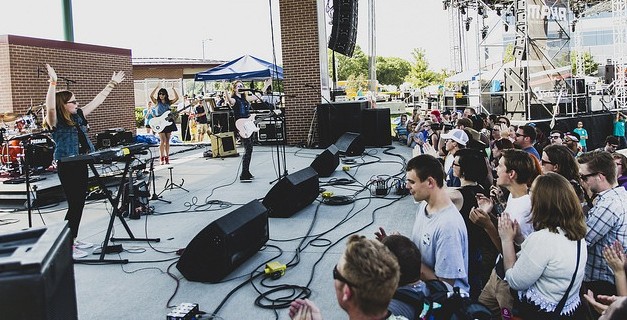 Calling all young girls with musical aspirations. Omaha’s musical and youth empowerment camp is gearing up for another year.

Omaha Girls Rock has opened camper registration for its two week-long sessions, July 11-15 and July 18-22 at the Holland Center. New this year, the weeks are split into age groups, with week one welcoming girls ages 10-12 and week two ages 13-16.

Now in its sixth year, OGR continues its mission to empower young girls through music education and performance. Throughout the week, campers learn instruments, form bands and participate in workshops focused on the history of women in music, technology in music, diversity awareness and positive relationships.

“Girls rock is a chance to express yourself in a safe environment,” says OGR executive director Melissa Wurth. “OGR is seeking teens that want to try something new, get creative and become leaders.”

Wurth says week one is nearly full, and encourages girls in the week two age range to sign up. Register for this year’s Omaha Girls Rock camp now through July 1 here.

OGR is also calling for volunteers for both sessions. Music experience is helpful but not required. Apply to volunteer here.

See Through Dresses, Both, Freakabout and more announce tours

As the weather warms, so does touring season. A handful of Nebraska bands have plans strike out this Spring, most notably to SXSW.

Omaha’s See Through Dresses announced an eight day jaunt yesterday. It includes stops in Missouri, Kansas and Oklahoma on the way to SXSW, where it’ll play the Funeral Sounds/Broken Media showcase. The indie four piece hits Kansas City, Mo., Illinois and Des Moines on the way back. See the schedule here. See Through Dresses is currently at work on a full-length album with Ben Brodin at ARC.

Hip-hop duo Both announced dates throughout the South and Midwest just a few days ago. Scky Rei and INFNTLP play Slowdown Feb. 19 and The Bourbon Feb. 20 in support of Oketo’s album release. They return to The Bourbon March 11 before heading down to Austin, Tx. See its schedule here.

Though it has yet to reveal the dates, Lincoln’s Universe contest will also head down to SXSW and then out on tour. It hinted at the trip, plus new music, last week. Fellow Lincolnites AZP are also headed to Austin.

No doubt many others are planning out of state tours this Spring and for the rest of the year. If you’re touring to SXSW, or anywhere else out of state in the next few months, we want to hear about it. Email us at news@hearnebraska.org.

Tonight, Grammy nominated singer Elle King plays a sold-out show at The Waiting Room. Her debut album Love Stuff, released a year ago yesterday on RCA, spawned hit single “Ex’s & Oh’s,” which was nominated for Best Rock Song and Best Rock Performance. Its producer, Jeff Bhasker, won Producer of the Year for the track. King has toured with Of Monsters and Men and Train, and is the daughter of actor Rob Schneider and model London King. RSVP here.

Also tonight, catch Ojai, Fake Plants and Pleiades & the Bear in Slowdown’s front room. Ojai is the songwriting project of Omaha singer/songwriter Michael Hulstein, who has been playing out quite a bit in recent months. RSVP to the show here.

The Bourbon hosts country music singer Frankie Ballard. Ballard’s career has taken off after winning Kenny Chesney’s Next Big Star competition in Michigan in 2008. Since then he has recorded and released two studio albums (one with Reprise, one with Warner Bros.) with a third in the works. The first single from that album, “It All Started With A Beer,” checked in at #32 on the Hot Country Chart. He’s also a former Western Michigan University baseball player. RSVP to the show here.

And in Benson, Wisconsin punk band The Minotaurs play a free show at Barley Street Tavern with Omaha support from Gallivant and Ships in the Forest. RSVP to the 9 p.m. show here.