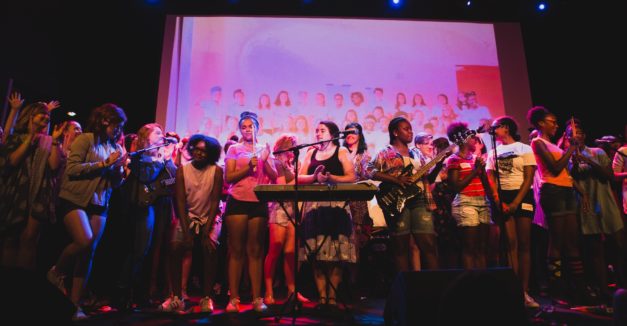 After years of serving young women aspiring to make their way in the music industry, Omaha Girls Rock is throwing its first ever fundraiser, styled after a pop icon.

Local supergroup Material Girl will perform several hits by Madonna Saturday as part of OGR’s inaugural fundraiser. The long-tenured singer is well-known for both her vocal expression and boundary-pushing performances, which strongly relates to OGR’s teachings of individuality.

In keeping with its theme, attendees are invited to come dressed as their favorite Madonna. The show will also feature raffle prizes, Plinko, a photo booth, testimonials from OGR campers and volunteer awards. Cost to attend is $35 and all proceeds help further the nonprofit’s mission to to empower young women to find their unique voice through creativity, music education and performance.

Can’t make the show but wish to contribute to Omaha Girls Rock? Do so here.

Sowerfest happens at Noon on Saturday, Oct. 15 at Lincoln’s Antelope Park and features seven performances and a host of speakers. Musical acts include Kait Berreckman, Jack Hotel, The Bottle Tops, Will Hutchinson, Emily Bass & the Near Miracle, Matt Cox and Mad Dog & the 20/20s.

This year presented by Young Professionals for Credit Unions, the event also aims to unite community and create transparency and outreach for the local credit union movement. Find more information and RSVP here.

The weekend is almost upon us and with it come a fresh batch of cool events. Our picks are below. Head over to our statewide event calendar here for more, and contribute your own events in the comments or add them to the website here.

Toadies with Local H at The Waiting Room – The classic ‘90s alt-rock band Toadies comes through The Waiting Room tomorrow night with Chicago rock band Local H. Known primarily for its debut album Rubberneck and its famous single “Possum Kingdom,” Toadies have experienced a resurgent second act this side of the 21st Century led by original founding members Vaden Todd Lewis and Mark Reznicek. Most recently, Toadies released its seventh studio album The Lower Side of Uptown this past July. 9 p.m. show, $20 advance/$25 day-of, RSVP here.

Queerfest 2017 at The Bay – This Lincoln event aims to celebrate and empower local queer artists by providing them a dedicated platform. It features several local musicians and slam poets and support from local organizations like OutLinc, Star City Pride, LGBTQA Resource Center at UNL, PFLAG Lincoln and Verge. It starts at 4 p.m. and alternates musical act and poet until 10 p.m. The event welcomes all ages. RSVP here.

Big Al’s Free Music Festival and Food Drive at O’Leaver’s – Omaha musician Al Hatfield hosts his 10th-annual food drive concert at O’Leaver’s, featuring a host of local acts and comedians. While attendance costs nothing, all canned food and non-perishable items brought to the door will be donated to Food Bank of the Heartland. RSVP here.