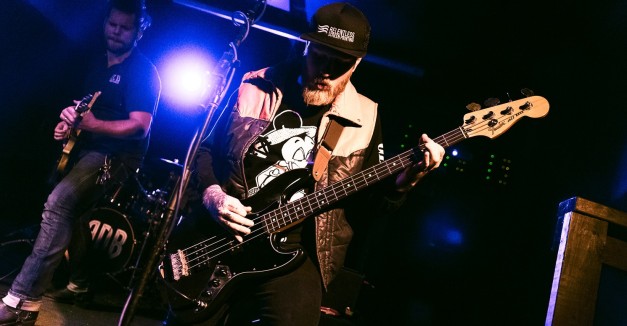 As NPR Music’s Tiny Desk contest draws closer to its end, entries are still going out from Nebraska.

Multi-instrumentalist and composer April Faith-Slaker has submitted her entry into the music video contest. Her clip, posted just a week ago, is the latest Nebraskan entry of which we’ve gotten wind.

Seated at an electric cello, the Omaha resident starts in gently, adding layers of deep bow-strokes and her own voice using various loop effects. As the song, “Copland,” builds, a transparent layer of video shows her hands and face, creating a haunting, almost ghostly effect that echos the song.

Faith-Slaker is no stranger to experimenting with classical instrumentation. In addition to playing locally and internationally with both orchestral and rock acts, she has turned data from statistical trends in child immigration, gun violence in Nebraska, access to justice, gender inequality, and housing segregation into musical compositions. Read the Omaha Magazine article detailing her project here.

Watch her perform “Copland” below:

Tonight, Milk Run’s CounterSOUND series continues with Bus Gas, HAG, Silversphere and Ben Eisenberger + Hannah Mayer Duo. This marks the second installment of the experimental music series, and figures to be spooky, spacey and droning, with loads of improvisational work. RSVP to the 9 p.m. show here.

In Lincoln, alt/metal band A Different Breed plays Duffy’s Tavern with Omaha hard rock bands The Matador and Super Moon. A Different Breed is in the later stages of recording an album, tracking its progress via Facebook here. Super Moon also recently released a single, “Dark Matter Woman,” which can be heard here. RSVP to the 9 p.m. show here.

And around the corner, Zoo Bar hosts The Magnetic Souls and The Late Jones Whittlers. For the latter, it marks an inaugural appearance at Lincoln’s blues haven. RSVP to the 9:30 p.m. show here.

Don’t forget to save the date for the second of HN’s Fifth-Annual Take Cover concerts. The show heads to Omaha’s O’Leaver’s Saturday, where 14 Nebraska bands will each reinterpret/cover a song by an influential Nebraska musician, plus one original. Nebraska comedian Ryan de la Garza will host. And proceeds help support HN’s paid internships! Rsvp to the show here.