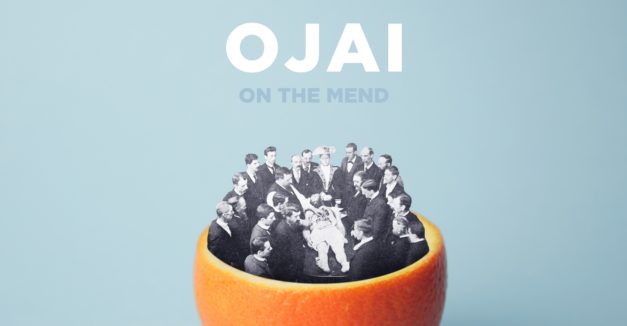 Insects have taken over the place where Michael Hulstein sleeps in one of two new tracks by his indie rock project Ojai. He’s dragged the mattress out of the bedroom and demands discussion, but the issue at hand is there, uncomfortably disrupting his relationship with the other.

“All I Can Ask,” which premieres today, is upbeat in its demeanor, as the title of the album from which it hails suggests. There’s an optimistic quality to On The Mend’s first two tracks, even as its voices throw their hands up in exhaustion.

Both tracks — Ojai’s first new music since December 2013’s Welcome Home — focus on recovery, with “Poor Maria” playing the more contemplative side. The songs search for a definitive guide through changing circumstances, wondering aloud about what the future holds.

Ojai releases the album May 5 at a show at O’Leaver’s. Listen to both new tracks below:

Q&A: Signals Midwest and the places we find ourselves

The long stretch of I-80 that runs between the Missouri River and the Rocky Mountains — the mind-melting stretch of flatness — appears on Signals Midwest’s latest album as a facilitator of bond. In the the title track, vocalist Max Stern describes what must have been a seven-hour conversation with a new acquaintance as they “drove the length of Nebraska and talked opportunities we couldn’t pass up, about the idea of movement as purpose and wanting to capture it all.”

“We started it as two people who barely knew each other and by the time we got to Denver I felt like we’d been friends for years,” Stern says.

The Midwest exists all throughout the Cleveland punk quartet’s fourth studio LP At This Age as the backdrop for change, both formative and destructive. Released last September on North Carolina label Tiny Engines, it boasts an energetic tangibility for its dreams and aspirations whether they come to fruition or not.

Implicit in these stories is the celebration of constant, which is that after nearly 10 years, Signals Midwest is still at it. In a Q&A with See Through Dresses’ Sara Bertuldo, Stern talks about the challenges of staying together over time and across space, making a more intentional record than ever before and the story of a trek across the Cornhusker State. Read on for their conversation.

Sara Bertuldo: So y’all have been around since 2008! That’s a mighty long time. Has it been the same line-up since the beginning? What’s the key to a band’s longevity?

Max Stern: Pretty much, yeah. Loren, Steve and I started the band as a 3-piece in 2008 and then Jeff joined on guitar in 2011. It’s been the same since then, although we have a rotating cast of friends spread out across OH and PA who help out on tours when someone else can’t go. That was a tough hurdle to get over at first, but we’re in a good place with it now.

I think the key to our band’s longevity is simply just having the motto “don’t break up.” I read a Talkhouse article called “Sometimes Being a Successful Band Means Not Breaking Up” and identified with parts of it so much. Yes, we have crazy schedules and have dealt with some heavy logistical and personal shit over the better part of the last decade, but we’re still here and I think that sorta means we beat the odds. I’m proud as hell of the fact that we’re still here.

What were you like 9 years ago, when you started the band? What’s 2018 Max Stern going to be like?

Other than the fact that I had almost shoulder-length bleached blonde hair? HA! Listened to a lot of folk-punk, went skateboarding a lot, wrote graffiti, tried not to get in trouble. We were just discovering everything. Loren and I hung out every day and went to as many shows and DIY festivals as we could. Steve was this cool “older kid” who we somehow convinced to play with us and it turned out we’d been going to the same shows for years. We got to see bands like Delay and The Sidekicks and Defiance, OH play all the time. Those were (and still are) the big ones for me. I just remember every day feeling like an adventure and so many shows felt life-changing.

I have no idea what 2018 Max looks like. 2017 Max moved to Philadelphia because he wanted a new challenge, so we’re currently navigating the logistics of being a multi-city band. I miss the hell out of everyone but it also means that when we do get together, we don’t spend a lot of time fucking around.

Which bands are responsible for you playing music? Is there a show that left an impression on you that made you want to start a band?

The Sidekicks are probably the biggest one for me in terms of how I became involved with DIY punk music. They put out a record called “So Long, Soggy Dog” in 2007 and I absolutely fell in love with it. They took me on tour as a fill-in guitar player in summer 2008 and when I came back I was hooked. Loren, Steve and I started Signals a month or two after that tour.

I saw Bomb The Music Industry on their first tour in 2005, actually at the show that the song “The First Time I Met Sanawon” was written about. It was on the floor of a shitty sports bar in Cleveland. I was 15 or 16 and got to play guitar on two songs because they had this policy where if you showed up and knew a song, you could play it with them. That was a pretty monumental moment for me.

Tell me about this current tour. Any cities you haven’t been to? Any particular city you’re looking forward to?

Never played Omaha, although I did spend one blurry evening there in 2013. I think I played a lot of pinball. I don’t remember. Honestly, really looking forward to it. I know everyone’s probably like “Omaha! Saddle Creek!” but I do find myself intrigued by the city and am stoked to spend some more time there. Psyched to go back to Colorado. And we’re doing two shows in Kansas – Wichita and Lawrence – which is always cool because Jeff grew up in Kansas and we usually have really fun shows in a part of the country that bands like ours tend to have a hard time booking.

What is one item you wish you could bring on tour if you could? What’s the best way to deal with anxiety on the road?

Honestly, I just wish that vegetables were easier to find on tour. I stop eating green things as soon as we leave and it’s never, ever healthy.

As for anxiety? Loren and I have been running on tour. That seems to help. But the biggest thing for me is when we stay at someone’s house and they have a nice dog. After you’ve been in a van and dark room all day, sitting on someone’s couch with a dog nuzzling into you is maybe one of the best feelings in the world.

Y’all released At This Age late last year. What was the songwriting and recording process compared to previous albums?

Just a lot more intentional. We edited every song, did pre-production, re-arranged things in the studio. Didn’t get married to any particular parts. We ended up trimming every song down and probably cut the length of the record down by 5 or 6 minutes, which we all initially resisted but ended up being a huge net positive. It was also the first record we’d done to a click track, which was crucial – everything else up to that point had been live with minimal overdubs. We got to be in a nice big studio in Chicago and really take our time exploring sounds. And we had a production / engineering team who really, really knew what they were doing. They pushed us really hard and helped us get out of our comfort zones. It is by far my favorite thing we’ve ever done.

You mention driving through Nebraska in the title song. Is that the flattest drive or what? What did you listen to on that drive? Did you stop anywhere interesting?

I love that drive! Some context here: over the last few years, we’ve become really good friends with The Smith Street Band from Melbourne, Australia. They were opening for Frank Turner over here back in 2013, and I tagged along for a week because I had to drive a friend’s car out from Ohio to Colorado. They had their friend Andy Johnson along with them, who is an amazing photographer / videographer, so he came with me and we just talked for something like 7 hours straight all the way from Omaha to Denver. We stopped and checked out some windmills. It was a beautiful drive and we got the huge payoff of the Rocky Mountains at the end of it. It was just a really great conversation and it stuck with me – we started it as two people who barely knew each other and by the time we got to Denver I felt like we’d been friends for years. The line “about the idea of movement as purpose, and wanting to capture it all” is about Andy visually chronicling everything and making his tour documentary. I ended up changing the name in the song to “Ana” who is this recurring character on our record, but it’s really all about him.

What’s next for Signals Midwest after this?

Starting to write songs again. Some east coast stuff in May, maybe some overseas stuff later in the year. Just trying to do what feels good. Would love to get back to EU/UK or eventually do an Australian full-band tour. I’ve toured there twice now but it’s always been acoustic-style. We’re talking to a promoter about it, so…fingers crossed!

I have a friend who works at the Rock and Roll Hall of Fame in Cleveland and she said that they’re doing a show series this summer, so maybe we’ll get to rock at the Rock Hall. Hah! 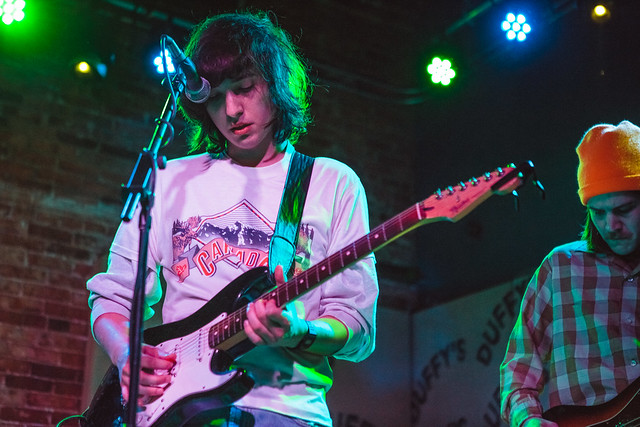 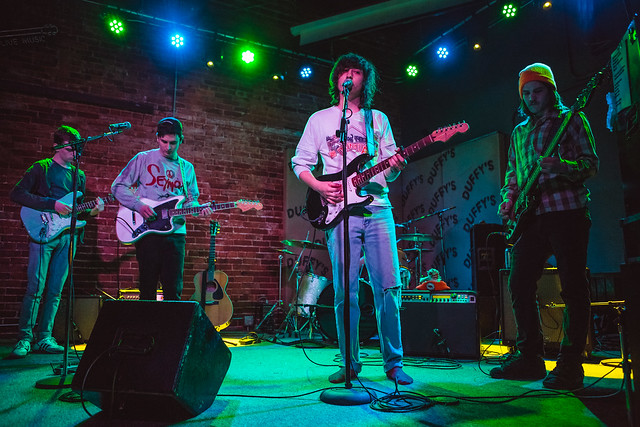 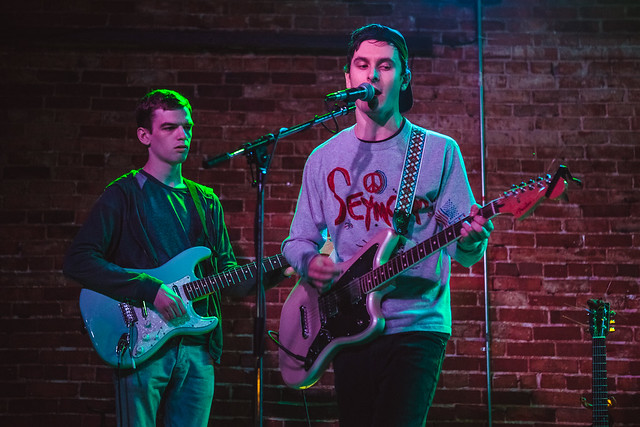 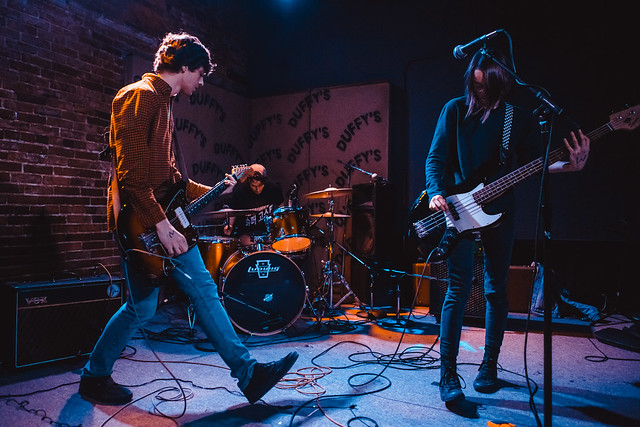 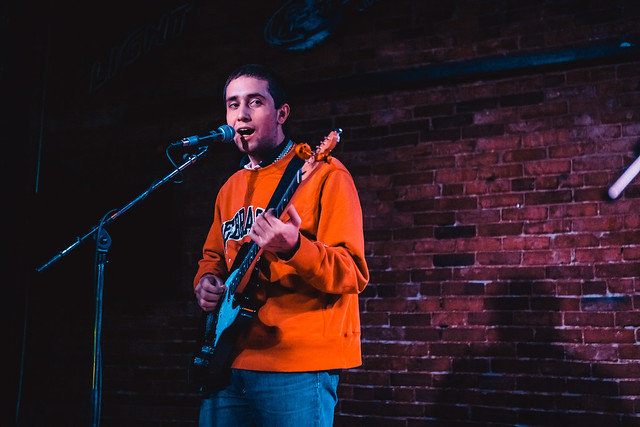 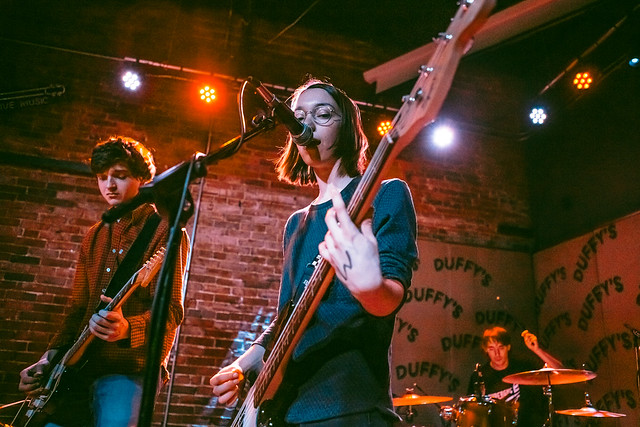 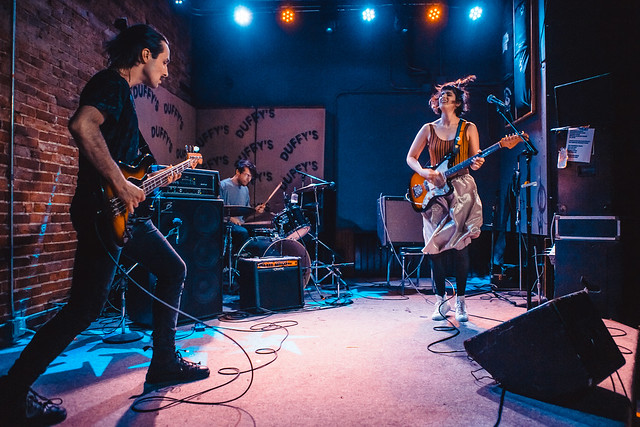 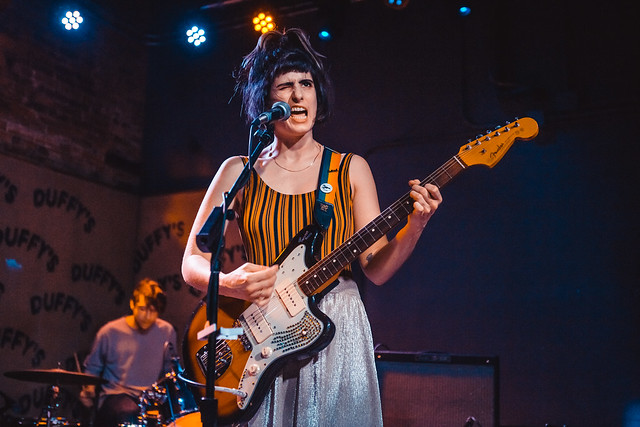 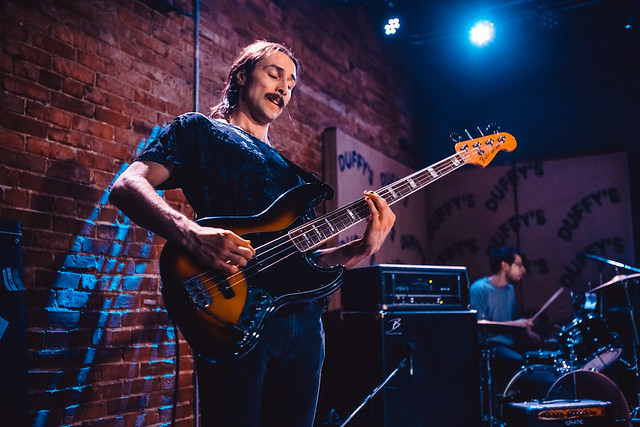 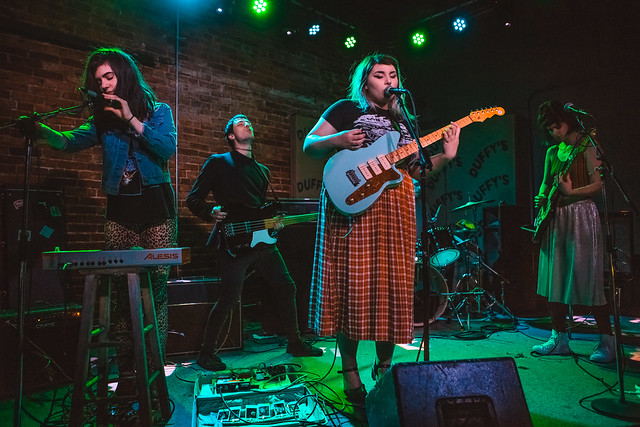 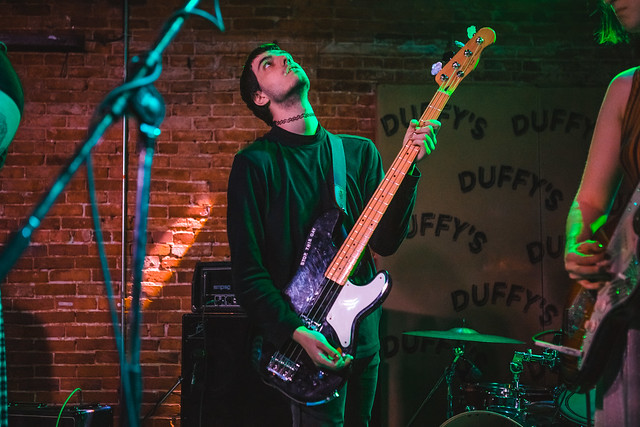 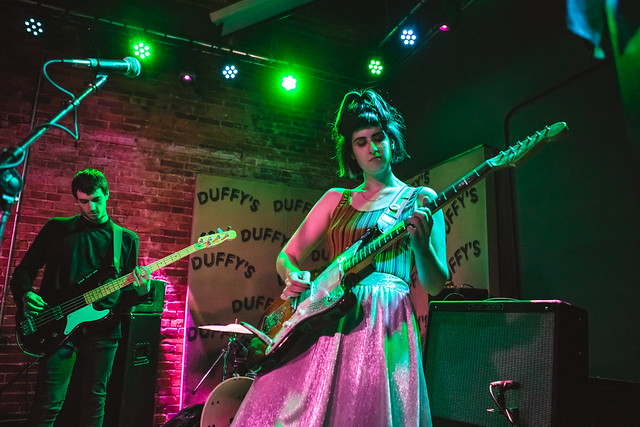 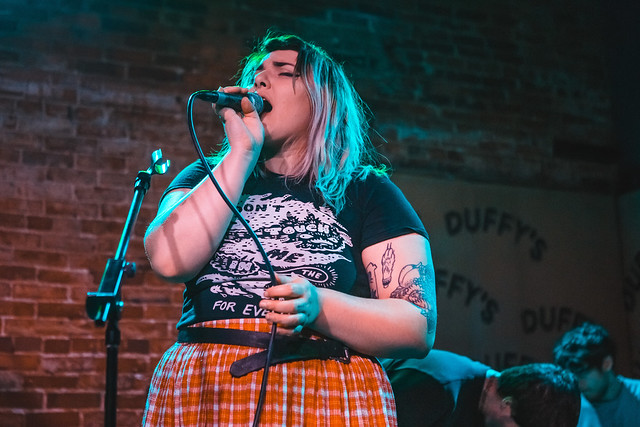 Tonight, Conor Oberst plays The Waiting Room with the Felice Brothers, who will also perform as his backing band. Oberst is on the cusp of releasing his second LP, Salutations, in six months. That record is the full-band companion piece to October’s Ruminations, and features all those songs as well as a handful of new cuts. The new album began streaming today via NPR; listen here before its Friday, March 17 release date. The 8 pm show is sold-out. RSVP here.

For a fuller listing of tonight’s shows, head to our statewide calendar here. We just added nearly 100 new shows through the month of April, but if we’re still missing yours, email us at news@hearnebraska.org. Use that same email for news tips, story ideas and other information.