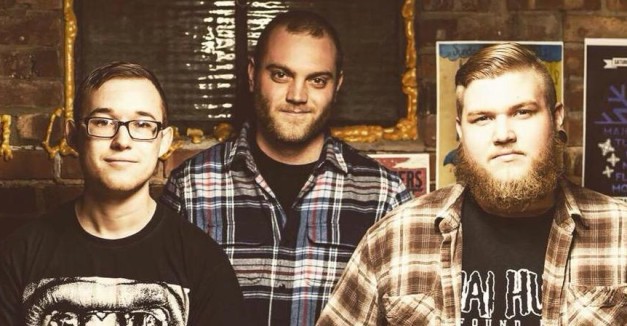 After four years of touring and carrying a torch for Lincoln’s all ages punk scene, No Tide will debut its first full-length record June 30.

Death Of The Sun, which will be released via Massachusetts punk label Take This To Heart Records, marks the fourth record in as many years for the highly active trio of Will Conner, Roeby Hauf and Sean Murphy. The band has cut one EP per year over the last three, but crafting a full-length came as somewhat of a different challenge.

“Writing an LP took a lot out of us compared to an EP,” says Conner, No Tide vocalist and guitarist. “You have to think about someone hearing it from an outside perspective and keep surprises coming throughout the album or else people are gonna just turn it off. You’re fighting for attention with an LP, people don’t have the attention span anymore, which is sad.

“[Recording Meridian] was our favorite experience of making a record,” Conner says. “When it came time for a full-length, we knew we wanted to Jay. We are just comfortable there.”

No Tide will play a release show for Death Of The Sun on July 18, the details of which are forthcoming. For now, pre-order the album via Take This To Heart’s website. The band has also recently revealed a track, “Empty Handed,” from its forthcoming album, which you can hear below.

There’s also a national tour on tap to start later this month. Dates on the poster below.

As is the industry’s pre-release-week custom, Icky Blossoms’ Mask is now streaming in full via Spin.com. It’s another good press get for the Saddle Creek artists, and caps off a late spring of nice blog features (not to mention Twinsmith’s) that’s also included The Fader and Noisey.

We’ll be listening to the record throughout the week in preparation for a review early next week. And if you haven’t seen the video for “In Folds” yet, enjoy/stomach it:

Beloved Waiting Room employee David Syslo passed away on Saturday after a prolonged fight with cancer. There’s a nice photo and post on the venue’s Facebook page celebrating Dave with many comments of support and love.

We’d like to offer our condolences and best wishes to Dave’s family and friends. If you have a memory of Dave you’d like to share, feel free and do it in the comments. Or, moreover, do it anywhere — maybe just with your friends over a beer — and appreciate one of the many friendly faces that’s helped make Omaha’s music community feel so tight-knit and welcoming.

On another page, last month, The Prids’ Mistina La Fave suffered a brain hemorrhage and was hospitalized. You might remember the Portland post-punk and shoegaze band from its Lincoln days about a decade ago.

La Fave posted on Facebook just yesterday that she’s set to make a full recovery and there’s no sign of an aneurysm, but medical expenses are still towering. You can help offset those costs by donating to this Indiegogo, which has been supported by more than 200 donors so far.

Otherwise, it looks to be a quiet Tuesday night (for shows, at least — it is Cinco de Mayo). Let us know what we have missed in the comments section or email us at news@hearnebraska.org.