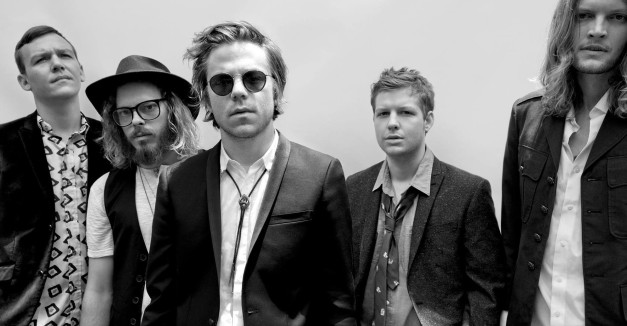 With more and more new music festivals popping up every year, it was probably only a matter of time before One Percent Productions joined in. One Percent brings most mid- to high-level indie and alternative acts to Omaha.

The production company and 89.7 The River are teaming up for No Coast Music Festival on June 2.

The festival comes practically without warning, aside from One Percent teasing a big announcement last night. The festival, which features Cage the Elephant, Bleachers, Joywave, Icky Blossoms, Saint Motel, In the Valley and more, will take place at Council Bluffs’ Westfair Amphitheater.

Tickets went on sale today for $10, which seems cheap for any kind of music festival. Get them here.

It will be interesting to see how the festival pans out. We’re not sure yet on more details, like if it’s a multiple stage festival or if more national or local acts will be announced, so stay tuned.

In three weeks, Hear Nebraska will send a coverage of team to SXSW 2015. One of our main goals each spring — this will be the fifth time HN has attended — is to cover the Nebraska acts playing in Austin. We have a working list, but would like your help, if we’re missing people. The latest addition, announced this weekend, is Omaha emcee Marcey Yates. He’ll be at The 512 on Sixth Street.

Here’s the other Nebraska acts we know will be there:

Omaha’s Yorick Studio collective launched a Kickstarter campaign over the weekend for the group’s collaborative vinyl album. The record will be produced by Christopher Ford of Des Moines’ Christopher the Conquered and Gloom Balloon.

Formed last year, Yorick Studio aims to be both a recording space and experimental venue. Members Erik Jarvis, Justin Carter, Kat Jarvis and more hope to expand on its scope and reputation with the record. It will feature songs by a handful of different songwriters, many of them working collaboratively across long distances, including Phil Smith who lives in Chicago. This also includes Kelly Musselman, Erik Jarvis’s original long-distance cowriter.

In the Kickstarter world, Yorick’s goal is fairly modest at $3,500. Check it out here. For more on Yorick, read an introductory column Jarvis wrote here.

Lincoln singer-songwriter project Alli and I released its new album, Imaginary Hearts on Friday. Hear Nebraska contributor Huy Nguyen shot a few photos of the release show at Slowdown. See them below and listen to part of the record here.

The Omaha garage rock quartet Eric In Outerspace plays Sweatshop Gallery tonight with Telepathy Problems and Chicago’s Lala Lala. Last week, we premiered the band’s new song, “Off This,” which will come out on a new tape March 14.

It’s also the kick-off song on this week’s HN Radio playlist, which you can stream at the top of any page on HearNebraka.org.

As always, email your Nebraska music scoops, announcements and tidbits to news@hearnebraska.org.