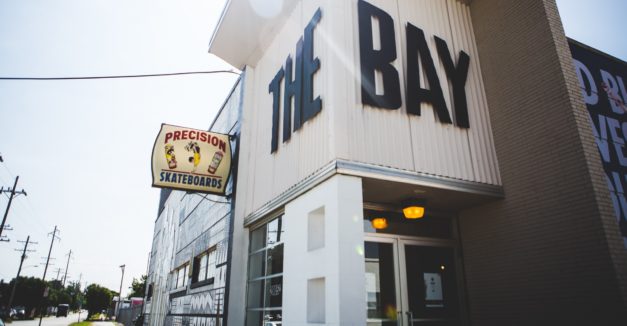 In the weeks following proposed federal budget cuts that target National Endowments for Arts and the Humanities, as the New York Times reports, calls have flooded local, state and national representatives offices. Those calls come daily from one of our own.

“I have been calling them once a day,” Hear Nebraska executive director Andrew Norman told The Times reporter Graham Bowley.

Bowley writes that “Since federal agencies cannot lobby, the fight … falls to advocacy groups like PEN, and the American Alliance of Museums, Americans for the Arts, and the Federation of State Humanities Councils.”

The story also explains the history behind attempts to cut cultural funding — which date in earnest back to the Reagan era — and what little they currently cost in relation to the larger pie of discretionary spending.

In other HN news, our Lincoln team has moved from its downtown office at Nonprofit Hub to its new home at The Bay.

It’s bittersweet; we are grateful to Nonprofit Hub staff for their incredible hospitality during the nearly two years of our writing, planning, meeting and running events from that space. But we’re also very much looking forward to a new beginning at The Bay and the opportunities it provides.

Thanks, Nonprofit Hub. And great to see you, The Bay.

While it’s a big day for us at HN, it’s an even bigger one for the Cornhusker State, and we’re joining in the celebration.

As Nebraska rings in its sesquicentennial today, Hear Nebraska compilation Volumes II and III are available for free via our Bandcamp page. They feature a sampling of some of the state’s most talented musical artists.

Along with its agricultural heritage, the nonpartisan unicameral and the Sandhills, Nebraska’s music and culture are what we like best about it. Whether you’re just digging in or revisiting old favorites, download the digital version of our comps here and here.

HN intern Lauren Farris sweat it out at Sweatshop last night with New York indie rock band LVL UP, Philadelphia-based group Palm and locals Thick Paint and Bed Rest. LVL UP is fresh off its full-length Sub Pop debut release Return To Love. The show was moved from its original location at Milk Run. 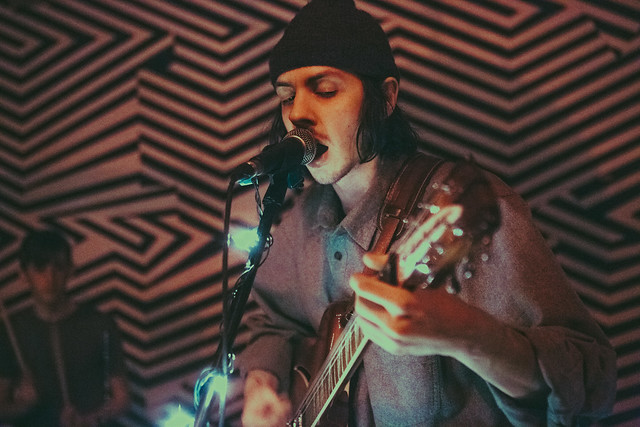 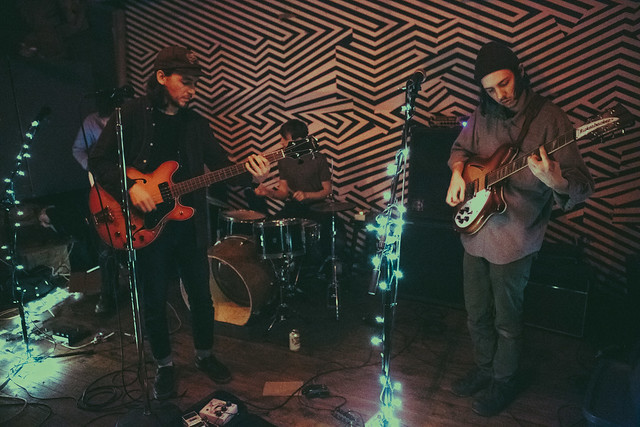 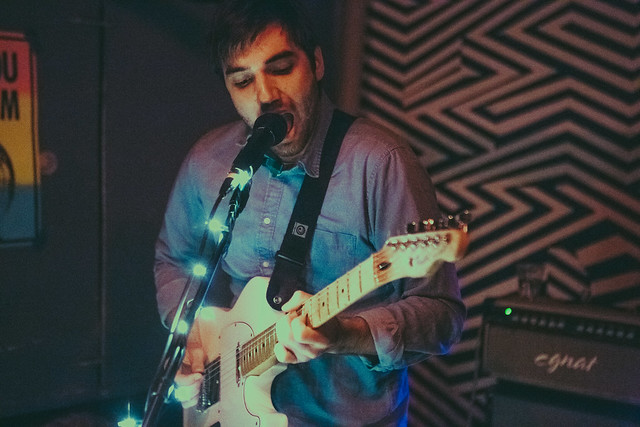 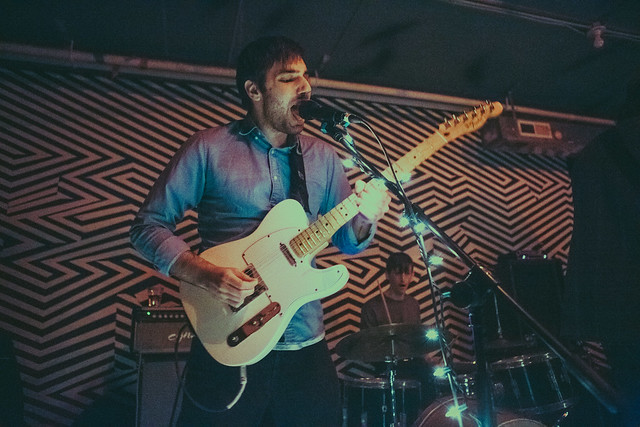 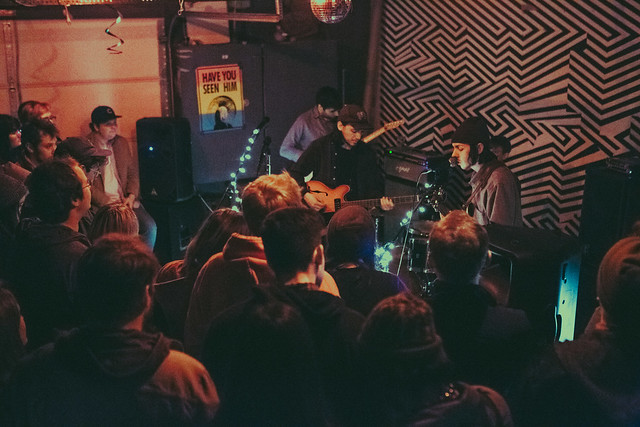 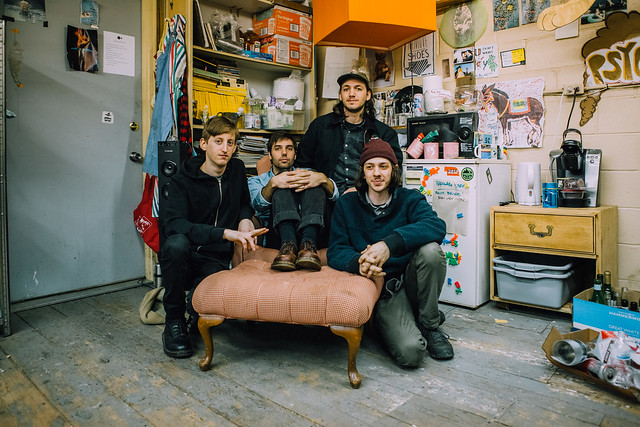 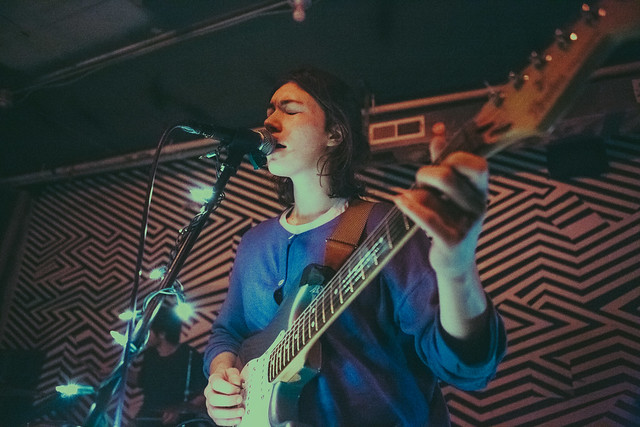 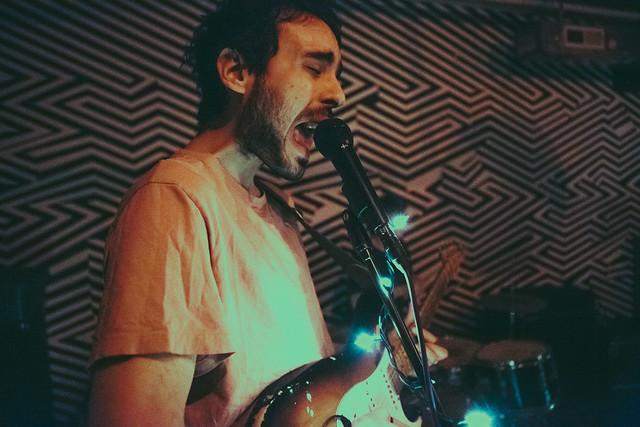 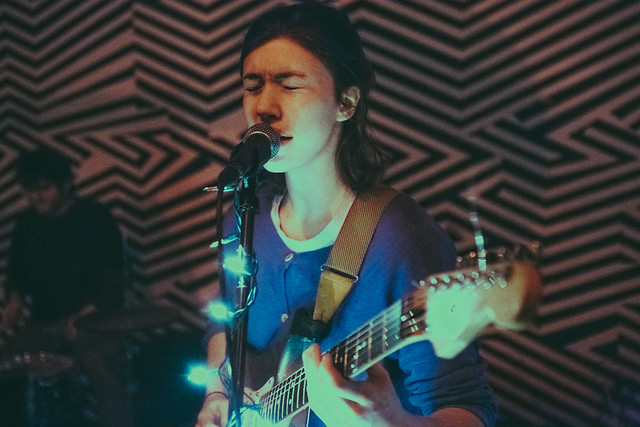 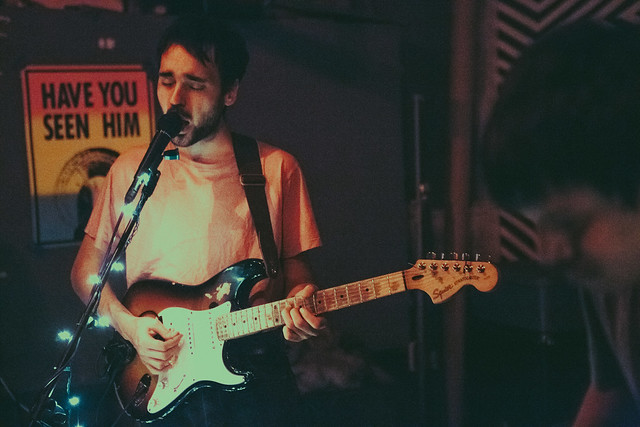 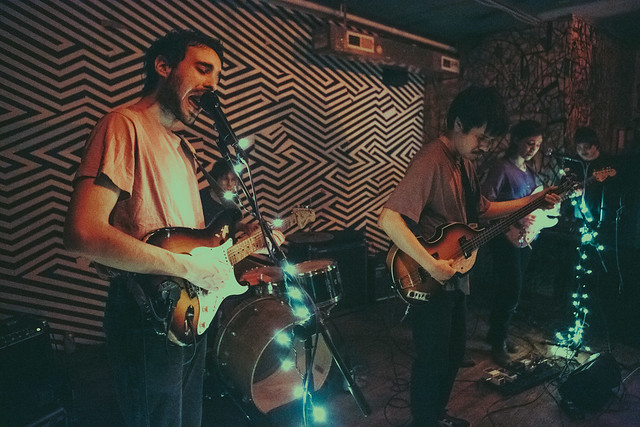 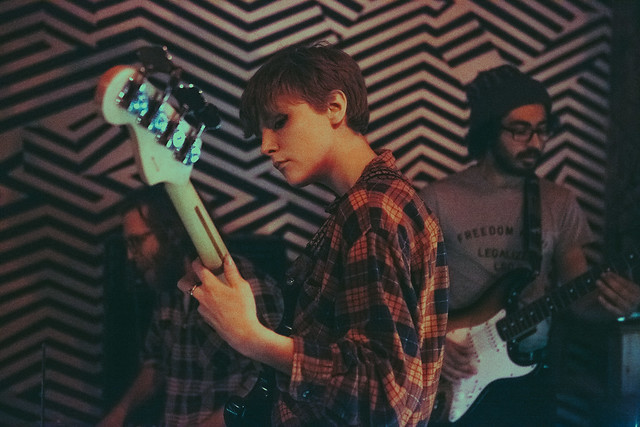 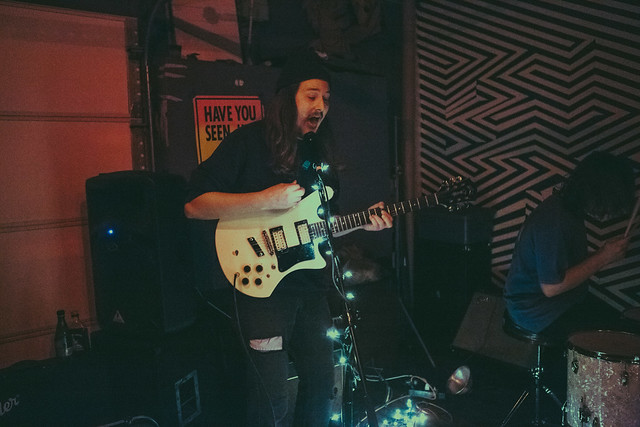 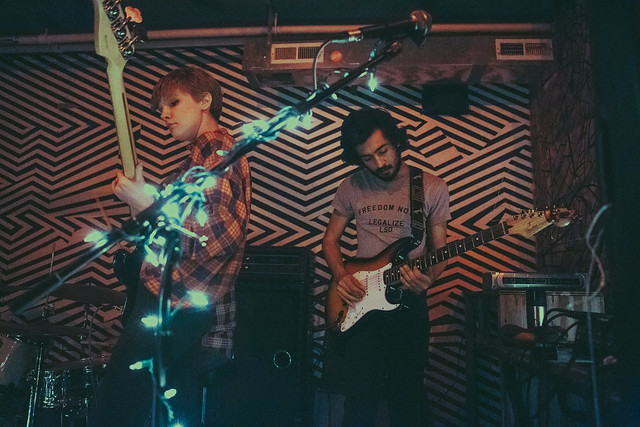 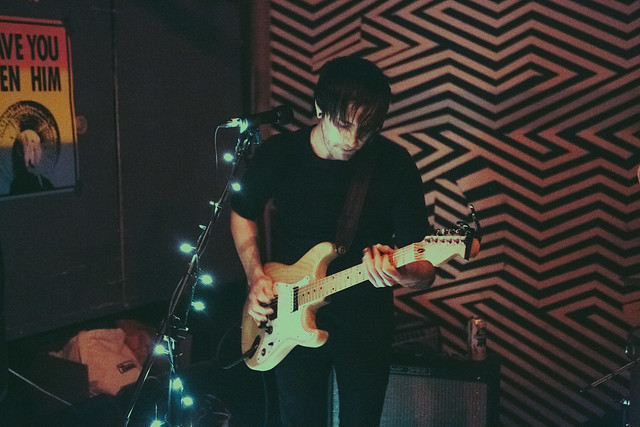 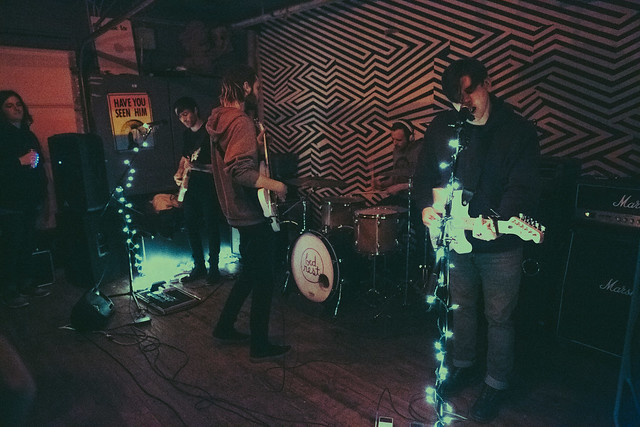 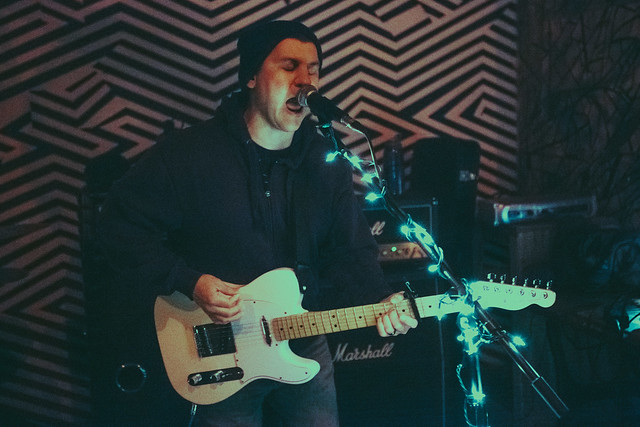 ‘No Resolution’ streaming via AV Club

In case your couldn’t wait for the release date, Tim Kasher’s third solo album is streaming now via AV Club.

No Resolution official drops this Friday, March 3, as the inaugural release on Cursive’s brand new label 15 Passenger. The pop culture website calls it “heartbreaking,” “offering a peek into some intimate moments of domestic discord.” Here’s what Kasher said in the story:

“I’ve been collecting songs for this record on and off for the last four years, so I’m ecstatic to finally see this being released. And ecstatic to be self-releasing on our new label! Attempting to represent these songs live is a challenge I’m looking forward to; we have a wee string section of cello and violin to cover a lot of ground, as well as a couple multi-instrumentalists to fill in the gaps. Thanks for potentially checking this out and hope to see you at a show.”

You can hear Kasher talk more about the new record, the new label and the writing style that changed the way he sings in the latest Dig Me Out podcast here.

Our On The Record podcast team gives their thoughts on No Resolution early next week. For now, stream the album here, and purchase via 15 Passenger here.

While out on his most recent tour, CBN’s Miguel Rocha chatted with Denver culture publication Westword about his work with Milk Run and the current nationwide DIY climate.

Rocha has long had a presence in Omaha’s music scene. In addition to CBN, the electronic artist has booked shows at the aforementioned DIY space, the adjacent NEO gallery and Omaha house show venue West Wing. For more of his thoughts, read the interview here.

Omaha-native comedian and Chicago resident Zach Peterson is currently out on a midwest club tour, leading up to a homecoming show at Reverb Lounge on March 11, during which he’ll record a new full-length special.

What follows is the first of three installments documenting his trip. Along the way, he hopes to draw parallels to touring as a musician and as a comedian — both part of his personal experience. Read on for more and RSVP to the Omaha show here.

I’ve been touring since I was 19 years old. My first tour was as an intrepid merchandise lackey for the Omaha hardcore bands Caught in the Fall and Sutter Cane. We went on an 11 day tour around the midwest playing for upwards of a dozen people. Even though it probably could not be rationalized as a success to anyone, I was hooked. I was in love with the frantic pace of racing across two states to wait in a parking lot for hours. Constantly emerging dreary eyed from a pungent van to saunter into a mixture of truck stops, regional fast food chains and some strange persons home to sleep or play a show. 26 years later, and not a lot has changed with me. I still travel the interstates of the midwest knowing which gas station has the best pizza, (Casey’s) and which towns in Iowa along I-80 have a Starbucks (Very few). The only difference is that now I tour alone in a Nissan Versa, instead of in a 16 passenger Dodge van with 12 other odorous men.

Touring as a DIY comedian and as a DIY band differ very little. You go from town to town, you hope the show is good, then you sleep in a hotel or on a couch and repeat until you go home detached from your friends and family. I prefer touring as a comedian more because I have actually made money a time or two and there is no gear to load and unload. Although, I do miss touring with bands because you get to tour with people. Touring with a people is advantageous because your social interactions aren’t limited to drunks in bars and the cashier at an interstate off-ramp Panera bread, who you can see yourself marrying if you had to live in Jefferson City, Missouri. So am really I hoping my family will like her and she won’t always smell like baked bread.

I toured for a few years mostly as a singer or as a tag along. It wasn’t long until i realized along with everyone else, that I did not possess any musical talent and served little to no purpose being in the van. Many of my friends pursued music, and I started comedy, not knowing what to expect. Ironically, it has led me back right back to where I started, touring the midwest and sleeping on couches. These last few years I have spent an equal amount of time on the road than I have sleeping in my own bed. This realization is bittersweet, because on one hand it means that I have become a professional stand up comedian, I make money from stand up, a dream that at one point seemed unobtainable. I sincerely get an emotional charge down my back when I can recount what I have accomplished when half my brain told me it was a foolhardy endeavor. On the other hand, constant touring makes having any sort of strong relationships very difficult. My friends are spread across the country and every woman I dated should have been named, “I miss you too, but I’ll only be gone for a few more days.” It can really seem like a true “Curse of the Monkey’s Paw” situation when you are staring at the ceiling of another Indiana hotel room, painfully alone at 3:30am.

So in May, I am breaking this cycle. In May, I am moving to Los Angeles. For the first time in my life, I am not going to live in the midwest. I have been married and divorced here, toured it dozens of times and written all my jokes here. So one more tour, one that ends with me recording my record at home, in Omaha on March 11th at the Reverb lounge. One more road for the road, if that makes any lick of sense.

My first show is in Chicago at @north. During my time in Chicago @north has become a very important place for me. Both of the monthly shows I produce, Arguments and Grievances and VHS, take place at @north as well as many other one off shows that I’ve thrown. A few years ago I was touring with my good pal Timmy Williams from the Whitest Kids U Know and our Chicago show was at @north. This is where I met Jim Weber, the manager of @north. He said he wanted to start doing more comedy at his bar and since then we have started doing comedy and today @north is a destination for some of the best independent comedy shows in the city. This is due to Jim letting people experiment with new kinds of shows and really providing a hub for the comedy community. He works hard to get people in seats and to make sure the show goes off without a hitch a lot of the time doing sound and working the lights himself. Anyone who has produced a show of any kind knows the possibility of a tenuous relationship with the venue you work with, bar owners and managers getting on your back to sell more drinks, make as show run longer/shorter or to get more people in their bar. I have never had to worry about that with Jim, and that is why I am excited to have my tour kickoff show at @north.

Tonight, Chicago is under a severe weather warning and I am not optimistic about the turnout for the show, but enough people show up to make me not feel like an utter failure. They are a good crowd, fun and attentive. My favorite comics in Chicago open the show up Nicholas Rouley, Micheal Timlin, and Rachel McCartney. Nicholas is probably best described as a classically blue comic. Jokes that are unapologetically dirty, with a rye wink at the end to let you know that he knows that the jokes are in bad taste, why do you think he told them? He is a great host and really loosen up the crowd to hear almost anything. Next up is Micheal Timlin, Timlin is sincerely my favorite Chicago comedian. I think his jokes are brilliant in a sense that are both analytical and heartsick. He presents jokes about love and marriage that seem to come from someone who is grasping tightly to the idea of being a hopeless romantic but he doesn’t know if he can maintain that cheery disposition for much longer. Rachel McCartney’s jokes are so sharp I can hardly stand it. Her wit is acerbic and her delivery is pointed making strong points and stronger jokes. All of this has handed me a real sweet spot to go up and do my hour for the first time of tour.

I would hate to vamp about myself, so all I am going to say is that I enjoyed my time on stage and it made me look forward to the rest of tour. Tomorrow I hit the road, again. One more time through the midwest before I only come back as a visitor.

Following a technical malfunction, our statewide events calendar is back up and running. Plan your showgoing evening and weekend with it here. Email news@hearnebraska.org with news tips, story ideas and song submissions for HN Radio.