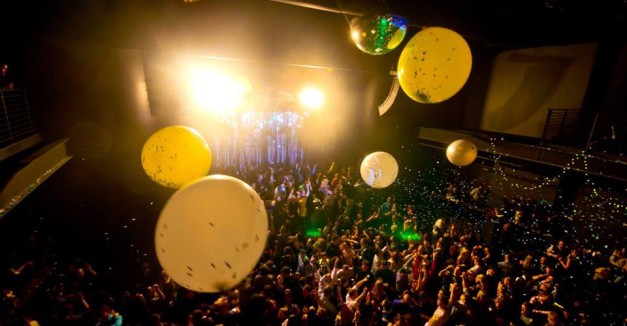 2015 is coming to a close, and there are a plethora of live-music ways to ring in the new year. Here’s a listing below:

Happy gOo Year 9 – The indie-rock dance party returns to Slowdown for its ninth New Year’s Eve. The idea started between Saddle Creek Records co-founder Rob Nansel and The Faint’s Todd Fink. After teaming up with a handful of like-minded friends (including Icky Blossoms’ Derek Pressnall, producer Keith Rodger, filmmaker Aaron Gum and Nater Smith), they threw the first gOo in 2007 after one of The Faint’s shows.

“People love any excuse to dress up and cut rug,” Fink explains. “In the early gOo days there was no other place for the indie rockers to dance to music they were familiar with.”

“The Soft Opening of gOo” has since evolved into a massive, consistently sold-out party. Fink says the gOo deejays focus on classics, nostalgia and other well-known jams in order to get people moving.”

“Everyone likes some popular jams. It’s like the fast food of club music.”

Tickets are $25. VIP access can be purchased for $75, and includes one-cent drinks, balcony access and appetizer buffet. RSVP here.

The Bourbon’s New Year’s Eve Masquerade Ball: In Lincoln, Josh Hoyer & Soul Colossal headline The Bourbon’s funky New Year’s Eve bash with Mesonjixx and A Ferocious Jungle Cat. Tickets are $10 at the door for mask-wearers, $15 without. The Bourbon will nominate the 10 best masks for the “golden ticket” grand prize, which is free shows for a year. All nominees will receive half-off drinks. It’s definitely worth your effort and creativity to look great. RSVP here.

HEE HAW Zoo Year’s Eve with Lloyd McCarter: Lloyd McCarter and the Honky Tonk Revival will be joined by players from around the scene for a “hee haw” themed NYE party. Best dressed hillbilly attire will win a prize. RSVP here.

Flannel Channel at Vega: For the best in ‘90s covers, head to the Railyard for Flannel Channel. $10 general admission includes free champagne toast. VIP tables are available for $200, and include seating for four, a bottle of premium champagne and hors d’oeuvres. RSVP here.

There’s also a vast menu of non-show parties at music venues, including Reverb Lounge’s free luau-themed party (RSVP here). Whatever you end up doing, hitch a ride with a sober driver and have a safe and happy new year.

New Year’s night, nurse that hangover back to health, then head to The Bourbon for a night cap with Olathe, Kan., noise rockers Bummer, Halfwit and Bogusman. Bogusman returned to the live stage this past Sunday after a seven-month hiatus, taken to record a forthcoming LP. RSVP to the show here.

Saturday, Simon Joyner & the Ghosts will play a show at Almost Music to celebrate the release of Only Love Can Bring You Peace. Joyner’s book compiles a selection of his lyrics from throughout his storied career. L. Eugene Methe and David Nance Band will also perform. The $6 cover charge can be applied to the purchase of Only Love Can Bring You Peace, and Solid Jackson Books is offering 25-percent-off any other book purchases when you buy Joyner’s book. RSVP here.

Also on Saturday, No Tide, Uh Oh and Mint Wad Wally play Slowdown. Both No Tide and Uh Oh released new music in 2015, and both made appearances on our contributor year-end-best lists (all of which can be viewed here and here). RSVP to the show here.

For the rest in a busy weekend of shows, head to our statewide events calendar here. As always, if you do not see your event or one you plan to attend, email us at news@hearnebraska.org. And keep those song submissions, story ideas and news tips coming.

On behalf of the entire HN staff, thank you for a fantastic 2015. We look forward to great things in 2016.