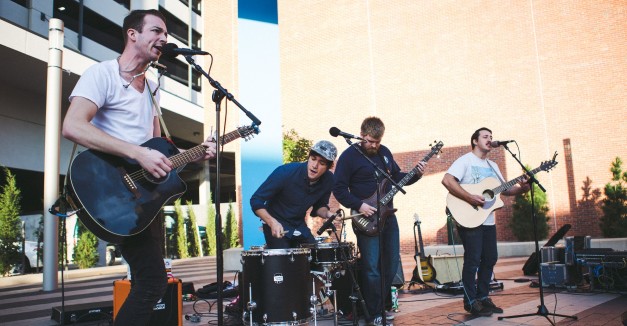 Monday means add-day on HN Radio, and we have a couple of brand new submissions this week, including one out of Grand Island.

This week’s featured song, “Spark,” weaves Arnold’s desperate whisper backed by Bohrer’s chopped up cooing and propped up on swelling synth and clapping beat. Of their relationship, Arnold says: “Obviously we’re aware of how people might read into things, but everyone who knows us thinks our relationship is weird anyway. We’ve always been entertained by how odd it seems to other people, because it makes perfect sense to us.”

Lincoln indie band Walk By Sea released new single “Drummer Boy,” off of its forthcoming EP As The Night. “Drummer Boy” starts as a folk song in a forest twilight, vocalist Zach Visconti’s weariness conveyed in pop harmonies. Drama builds in a wash of cymbals as the band layers on a hard rock guitar lead. It’s an unconventional mix of genres, but Walk By Sea blends them seamlessly.

Check out the rest of the HN Radio playlist — featuring Marcey Yates, See Through Dresses, Cursive and more  — at the top of our homepage. And listen in to 89.3 KZUM or KZUM.org from 8 to 10 p.m. tonight, as Hear Nebraska FM will spin a two-hour Nebraska music playlist. No live guest this week, as we gear up for Super Ghost a week from tonight.

One last note: thank you to all who gave during KZUM’s Fall Pledge Drive, not only to HN FM, but to any of the community oriented programming on Lincoln’s community radio station. The show appreciates your support of what we do, as well as your support for local radio.

Lincoln rapper Scru Face Jean released a new EP over the weekend and is already getting rave national reviews.

Check out the mention here, and hear “Popular Freestyle” from Another Night below.

Tonight, Cursive returns home from tour to play O’Leaver’s with Chicago’s Bellum Boca. This caps a short run of shows, including a few dates with Coheed & Cambria. It sounds like tonight will be the Omaha band’s last show for awhile. As for Bellum Boca, the six-piece trades in dreamy, ambient progressive rock bolstered by percussion that shifts from slick jazz to thudding rock. RSVP to the 9 p.m. show here.

Also tonight, Toro y Moi plays The Waiting Room with Oakland, Calif., band Astronauts, etc. Toro y Moi (the stage name of Chazwick Bradley Bundick) released surprise mixtape “Samantha,” a collection of songs written over a three-year span, on August 28. He also released an album proper, What For?, April 7. Bundick is often referenced as a pioneer during the rise of chillwave. Astronauts, etc, released an album of their own on September 18. Tickets to the 9 p.m. show are $20. RSVP here.