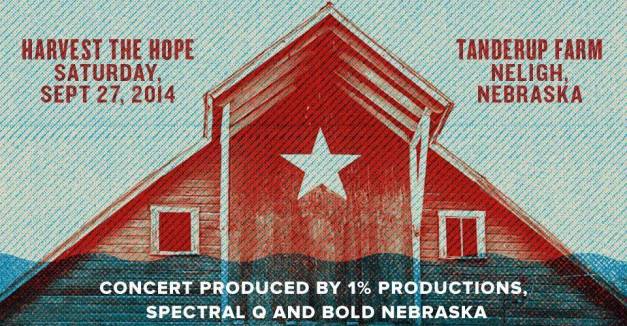 The three-song EP will be the young Lincoln band’s first release, recorded at Silver Street Studios in Ashland.

Formerly Jeazlepeats, Oketo has been growing their recognition steadily this past year, opening for local giant Josh Hoyer and the Shadowboxers at the Zoo Bar and Saddle Creek’s Pujol at the Slowdown.

You had to know the 500 extra Willie Nelson/Neil Young tickets would sell quickly. After going on sale yesterday at 10 a.m., they’re gone. That said, Bold Nebraska posted in the Harvest The Hope Facebook event that they’re still offering volunteer opportunities. Donate your time, and you could see the two folk/country legends free of charge.

One week from today, Hear Nebraska and Urban Outfitters present the next First Thursday concert from the downtown Omaha clothing store. This time out we’re joined by AZP and Marcey Yates (Op2mus), who’ve both had busy summers and early autumns.

The Lincoln hip-hop/rock band AZP has toured regionally, darting out for weekend stints in Lawrence, Madison and Chicago. Yates, for his part, has rapped or had his hands on three different releases this summer, all on his new label Raleigh Science.

As always, the UO x HN shows are free with complimentary pizza and beer for as long as supplies last. RSVP here.

With War On Drugs and CHVRCHES last night, Omaha continues a string of solid shows tonight with Ty Segall and La Luz at The Waiting Room.

The garage rocker is touring his August release Manipulator. Segall has released seven solo albums. Tickets are $15. Get them here.

The Seen and Both return to Nebraska tonight to conclude the “Great Rock Weak Raps Tour” that took the two groups to Des Moines, Madison and Chicago. It’s an unlikely match in some ways — melodic pop punk and smooth hip-hop — but the groups pair well in terms of enthusiasm and engaging live shows. The Seen with Both is less like a showcase of different genres and more like the same end of two different musical spectrums. RSVP here.