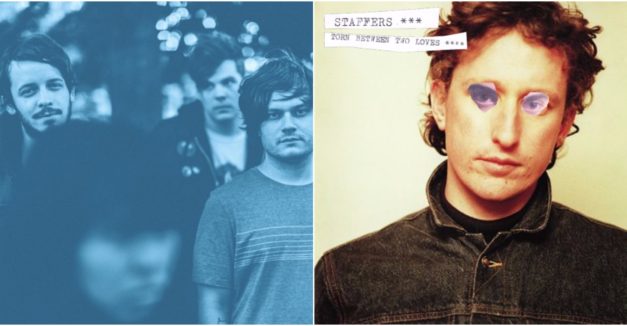 Two Omaha bands with records due this summer offered a glimpse of what’s to come yesterday.

Twinsmith’s Stay Cool, the band’s follow-up to Alligator Years (2015, Saddle Creek) will be released July 14 with Saddle Creek. Pre-order the record here. Yesterday, the band dropped its found footage-style video for “Matters,” (premiered May 1) where waves of reverberated guitar and keys are pushed along by a relentless bass rhythm. It’s a lean-in to a dreamier pop sound only teased out on Alligator Years. The band worked closely with Graham Ulicny (Reptar, Thick Paint) on the record.

Twinsmith has six dates scheduled with Rooney, including a June 21 appearance at The Waiting Room.

See Through Dresses premiered “Pretty Police” yesterday, the lead single from Horse of the Other World. Tiny Engines releases the album on June 30 (pre-order here). It follows the band’s Tiny Engines debut, End of Days (2015) and so far seems to be a smart build on the gritty fuzz rock on which See Through Dresses has made its name.

“Pretty Police” relies more on thick-laid keyboards, as opposed to shredding guitar, than previous See Through Dresses standby tracks like “Drag Scene,” and the result is something more ethereal. Still, there’s no sacrifice of the End of Days-esque bittersweet edge.

Torn Between Two Loves features nine tracks recorded around Omaha in 2015 and mixed by Ben Brodin. The record promises a more polished take on the droning basement rock while maintaining Staffers raw core.

McKeever will tour later this year in support of the album, which will be available on cassette and CD.

Rock Island Blues, a puppet play written and directed by Robert Stewart, will have a six show run at The Mez in Lincoln in this month (RSVP here). The production includes a full slate of Lincoln musicians, including live music by John Friedel (Green Trees). The play’s cast includes Katie Loughrist (Emily Bass and the Near Miracle), James Milton Wacthel (Green Trees), Nick Svoboda, Josh Miller (Powerful Science) and art by Thalia Rodgers and Nolan Tredway.

Monday, Omaha electronic ambient act Ridgelines released its Live at O’Leaver’s set, recorded in December. The set featured a one-time duo for the usually solo act, led by Mike Johnson. In December, he played with Matt Arbeiter of It’s True and Eros and the Eschaton.

On Saturday, Ridgelines plays O’Leaver’s with Anonymous Henchmen and Jacob James Wilton. A limited edition physical release (CD and cassette) of Ridgelines Live at O’Leaver’s will be available for five dollars or free with the purchase of other Ridgelines merchandise. RSVP here.

New Wave series tonight at Reverb, and other shows

That means electronic soul, hip hop, blues, beatboxing and spoken word all under one roof.

Additionally: Fufs, Bib, No Thanks and R0ach play Milk Run; Sam Adam Martin, Those Manic Seas and Razors play Brothers Lounge. And, of course, Chance the Rapper will be at CenturyLink Center. For a full list of tonight’s shows, check our events calendar.