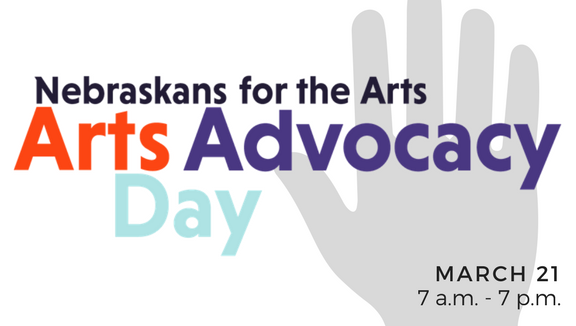 As Doug Zbylut considers the climate for arts support in Nebraska, he refers to the state’s new branding: “Good Life, Great Opportunities.” Implicitly referenced is the ongoing work in making the state attractive to both businesses and individuals who might relocate to the Cornhusker State

To Zbylut, who is the executive director of Nebraskans for the Arts, government thinking boils down to things like workforce training and tax incentives — items that benefit businesses. But take a closer look at any downtown revitalization project, he says, and the arts are usually nearby.

“I think the arts works on the “good life” portion of this,” Zbylut says. “When people are looking at where they’re going to live, they’re looking at what there is to do. The arts and cultural infrastructure are going to provide the incentive to stay. It’s an important cornerstone for tourism and economic development.”

That idea forms the basis for Nebraskans for the Arts’ Arts Advocacy Day on Tuesday, March 21 at Kaneko. It mirrors the national Arts Advocacy Day which takes place simultaneously. Like a polling place, the Omaha art gallery will be open from 7 am to 7 pm as the arts organization highlights ways that private citizens can engage their local, state and national representatives and advocate for investment in the arts.

Zbylut points to a January 19 article in Washington-based online political publication The Hill, which covers the current federal administration’s targeting of arts funding. It explains that the National Endowment for the Arts, the National Endowment for the Humanities and the Corporation for Public Broadcasting lay on the chopping block as the administration eyes budget cuts. Together, they comprise $745 million of the $10.5 trillion in potential cuts, or 0.07-percent.

There are also talk of cuts at the state level — about four-percent — the combined impact of which would have a potentially dramatic effect on arts programs statewide, according to Zbylut. That goes for programs like HN’s Good Living Tour, among many others.

“A lot of people don’t realize the impact this is gonna have,” Zbylut says. “If NEA is eliminated, that’s 35-percent of the grant funds given out [statewide]. There could be elimination of arts education programs around the state.”

In the face this potential rollback of arts funding, Zbylut says many are asking what they can do to combat it, which is where Arts Advocacy Day comes in. From 7 am to 5 pm, volunteers will help attendees write letters, send emails and make phone calls to elected representatives. They will also share talking points and facts that will help bolster their positions.

Then, at 5 p.m., local nonprofit arts organizations will gather at Kaneko for its Community Celebration. Individuals from those organizations — which are still being confirmed — will give brief presentations on projects funded by the NEA and how vital those grants are to parts of the artistic community.

He hopes Arts Advocacy Day will help shed light on the advocacy process and help it seem less daunting to folks who might be intimidated by it.

“When you hear the word advocacy, it can sounds elite, or it sounds technical,” Zbylut says. “We want to tell people all you’re trying to do is share your opinion and information that is important to you with elected officials so they can enact policies and bills that can affect the arts.”

In 2009, Orenda Fink and Cedric LeMoyne (aka Scalpelist) collaborated on an ethereal, shoegazey project called O+S. The duo released a self-titled debut that compiled the influences that gave both Azure Ray and Remy Zero — their respective primary projects at the time — their calming presence.

Eight years and a slew of projects later, Fink and LeMoyne are back at it, debuting a fresh track “Hold You Down” via Paste. It will appear on the duo’s sophomore LP You Were Once The Sun, Now You’re The Moon, out this Spring on Saddle Creek Records.

“Hold You Down” is at once intimate and atmospheric, as brisk and calming as a gentle midnight breeze. Necessary, as it explores coping with loss before the fact.

“‘Hold You Down’ is about the impossible task of accepting you are going to lose someone before you actually do,” Fink tells Paste. “It wonders if love is the thread that weaves our collective fabric- and supposes that once you love someone they are a part of you forever, regardless of if they still inhabit their physical body or not.”

Listen to the song here.

Tonight, New York indie rock band LVL UP and Philadelphia-based touring partner Palm come to Omaha. LVL UP formed in 2011 as guitarists Mike Caridi and Dave Benton, eventually adding bassist Nick Corbo — with whom the two were originally going to release a split cassette — and drummer Greg Rutkin. The band released Return To Love, its Sub Pop Records debut, on Sept 23, 2016 to general acclaim. MTV said the album “finds LVL UP examining not just love and heartbreak, but the bigger existential dilemmas facing a generation that often struggles to believe, especially when it comes to themselves.” Omaha bands Bed Rest and Thick Paint round out the bill. The show, originally scheduled to take place a Milk Run, is now at Sweatshop, 2727 N 62nd St. $12, 9pm, all-ages, RSVP here.

Find more shows via our statewide calendar here. If you do not see your show or one you plan to attend, email us at news@hearnebraska.org. Use that same email for story ideas, song submissions and other news.