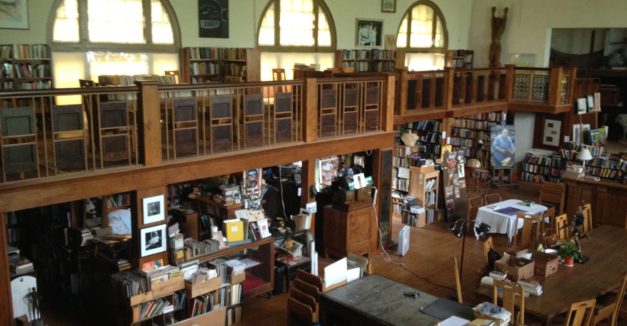 Nebraska lost a cultural icon this weekend, as Antiquarium bookstore owner Tom Rudloff died at 76. Rudloff operated the Antiquarium, in various locations, for close to 50 years.

“After nearly 40 years as Omaha’s de facto den of intellection, the Antiquarium relocated to Brownville in 2008. The new place contains over 150,000 rare and used books and is modeled after the famed Long Room of Dublin’s Trinity College Library,” wrote Tom McCauley in an Omaha Magazine feature last May. “Despite moving to a little-known town bordering the state of Missouri, the Antiquarium still attracts visitors from around the world seeking what they won’t find anyplace else.”

“Of the thousands of posts AKSARBENT has made, this is by far our most reluctant effort, as the death which necessitated it has made our world smaller and less joyful. Most of the friends and acquaintances we made in Omaha since moving here from Lincoln in the late 1980s were of people met at the Antiquarium or their friends. It would be impossible for us to estimate the synergies forged, relationships born, and art, political and entrepreneurial alliances made at Tom’s ‘business.’”

Antiquarium used bookstore and basement record shop has been seen as a cultural epicenter to Omaha’s community of artists and musicians since Rudloff and his sister Judy opened the shop in 1969. While Antiquarium, and all of its historical richness, will continue to serve the community as an resourceful artistic hub spot, the presence of Rudloff will be deeply missed and remembered.

Rudloff’s memorial service will be held on Friday, June 3, in Omaha at John A. Gentleman Mortuary, 1010 N 72nd St. Rudloff’s family will receive friends at 4 p.m. Service will start at 5 p.m. with a reception to follow at a location TBD.

Hear Nebraska is deeply sorry for this loss and we send our condolences to Rudloff’s family, friends and to everyone whose tastes and culture have been impacted by Tom. If you would like to share a note of remembrance, please do so in the comments below.

You can almost smell The Mill’s French roast espresso in the lyric video that premieres today by Lincoln acoustic “fire pop” group Alli and I (singer/songwriter Andrew Standley and his guitar Alli). Andrew Poole filmed the 3-minute time lapse video from the patio of Lincoln’s staple coffee shop in the Haymarket. “Darlin’” is the first of five lyric videos to be released off Alli and I’s five-track Strings EP in the coming months.

“Darlin’” features Alexa Kriss on harmonies, Marty Steinhausen on upright bass, Molly Rezich on cello and Victoria Shum on violin. With its contrasting dark lyricism and high energy approach to string instrumentals, “Darlin’” was written about Standley’s friend who he says had some bad run-ins. The lyrics represent the contrast Standley felt about his friend being trapped in a bad relationship and the joys of having a friendship like the one he has with her. “Darlin’” keeps the viewer’s eyes on the time-lapsed clouds as they move across the changing colored sky. Watch it below and and listen to the entirety of Alli and I’s Strings EP here.

Tonight, Reptar frontman Graham Ulicny brings his experimental solo project Thick Paint to Lincoln for Duffy’s Dollar Beer night alongside Omaha hip-hop duo BOTH. In April, HN released Thick Paint’s emotional live performance of “Seasons of Change” at O’Leaver’s, where his set was also recorded and mixed by the Live at O’Leaver’s soundteam. Watch it below and stream Thick Paint’s Live at O’Leaver’s set here. RSVP to tonight’s free show here, and please consider donating a suggested $5 to the commuting Omaha bands.

Also tonight, electro-pop duo Purity Ring returns to Omaha for the first time since Maha 2015 to play Sokol Auditorium with Canadian producer/ singer-songwriter Lydia Ainsworth. In its newest record, Another Eternity, Purity Ring explores far and wide realms of future pop with bright electro soundscapes that come through particularly in the album’s recognized hit track “bodyache.” Listen to the song below and RSVP to the show here.

Country-folk duo Mandolin Orange (Chapel Hill, NC) plays Waiting Room tonight with opening singer/songwriter Michaela Anne. Mandolin Orange’s 2013 debut release, This Side of Jordan was deemed “effortless and beautiful” by NPR and its most recent record, Such Jubilee, explores the meaning of home from the perspective of being on the road. Listen to “Daylight” below and RSVP to the $12 show here.

For a full list of concerts happening this week, head to our statewide calendar. If you do not see your show or one you plan to attend, add it yourself here. This week, send your news tips, story ideas and song submissions to former editorial intern Gabriella Parsons, who will be running HN’s website through June 1. Reach her at gabriellap@hearnebraska.org