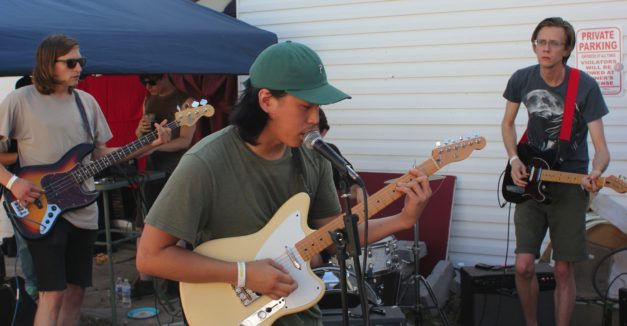 When indie rock band Navy Gangs moved from Omaha to New York City last year, its members seemed to have their eyes set on music as a career.

The band has previewed its next step forward, debuting “Special Glands,” the first track from its forthcoming self-titled EP, yesterday via Stereogum. The track comes back with a 12-date tour that comes to Omaha July 19 with Staffers, Lush Bruise Crew and Vegetable Deluxe (RSVP here).

Stereogum’s debut briefly recounts the details of Navy Gangs’ jump to Brooklyn, moving in with guitarist Noah Kohll’s grandmother and using it as a makeshift studio. It was there that Kohll, vocalist/guitarist Matthew Tillwick, bassist Wilson Keithline and drummer Gavin Cordaro cut the new EP, which was mixed and mastered by New Jersey songwriter Delicate Steve.

Navy Gangs is out Sept 14 on No Roads Records. Hear “Special Glands” and see upcoming tour dates below:

Rapper Marcey Yates, Rock and Roll Suicide and DJ Joe Benson serve as the second live music billing of the series, which was introduced last month. Music starts at 5 p.m. on the corner of Military and Maple and runs until 11 p.m.

In addition, the beer garden will feature Surly Brewing and the Omaha Craft Bartenders Guild. Artist norm4eva will host a community art project, and there will be a BFF artist market. RSVP here.

Today in off-color, Speedy Ortiz drummer Mike Falcone sat down with The Good Life for a roundtable Q&A in Norman, Okla., the last stop on their nationwide tour.

Falcone’s blog, Taste My Kids, covers all sorts of topics, from the innocuous (“tweets that i almost tweeted within the past 30 minutes”) to the sentimental (“The Prince Archival Vault In Our Own Brains”) with a distinct sense of humor. So of course Falcone kicks off The Good Life interview by asking them about the best bar mitzvah they’ve ever attended (Stefanie Drootin Senseney’s answer: “Oh my God, my own!”).

Read on here for more on ‘90s alt-rock bands they know and how many classic rock t-shirts drummer Roger Lewis owns.

If you’re looking for shows tonight — like Lunch Duchess, Apes of the State, Anna McClellan and The Way Out at Milk Run (RSVP here) or Uh Oh, Gas Up Yr Hearse!, Street Sity Surf and The Way Out (yes, two shows) at Lucy’s Pub (RSVP here) — head to our statewide calendar here.

Bands/songwriters: have an upcoming release, tour or other important happenings? Email us at news@hearnebraska.org.