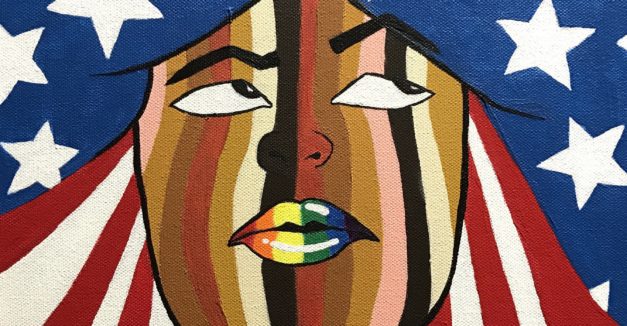 Omaha artist Jacquline Smith was scrolling through her Facebook feed when she saw a call for “Nasty Women Artists.” The group exhibition came about to demonstrate solidarity among artists who fight to resist oppression against women’s rights, immigrant rights and LGBTQ+ rights.

Originally planning to just submitting a piece to the NYC exhibit, developed by Roxanne Jackson and Jessamyn Fiore, Smith decided to create her own Nasty Women Show after she saw a call to curators to bring the event to their own cities.

“This show was organized to get people talking,” Smith said. “There needs to be more open and honest dialogue around women’s issues. People need to be made to feel uncomfortable, because just look at where conformity has gotten us.”

The project “Nasty Woman Exhibition” is a one-night only, pop-up show on Saturday, Jan 28 that will feature music, art, comedy and much more. The free event takes place at Petshop Gallery, at 2725 N. 62nd St. in Omaha, and 100 percent of the profits from the artwork sold at the event will go to benefit Voices of Hope, a local organization that provides services for survivors of domestic violence/sexual assault and their families.

Electronic artist Bell Mine and rock singer/songwriter Kait Berreckman will perform. Artwork will be priced at $100 or less, and local artists such as Ann Osborne, Angi Sada, Elspeth Hunnicutt and Savannah Savick donated pieces for the show.

The phrase “nasty woman” stemmed from an insult once hurled by Donald Trump at Hillary Clinton during the presidential debate. Women that are assertive, confrontational or outspoken are sometimes viewed as being mean or “nasty,” and since said debate, many have adopted the word to show they are not complicit with oppression. Women from all backgrounds who identified as “nasty women” were invited to submit artwork or perform at the show.

The co-organizers hope that the event will elicit “a spectrum of emotion” from the guests. Hulstein said that the exhibit is entirely inclusive, and guests should stay true to fighting for equality for all and resisting oppression.

“(It is) incredibly relevant to what is going on in our country right now,” Nicole Hulstein, co-organizer, said. “This is a community effort, and we know this is just the beginning of something big.”

It doesn’t take more than one sprawling, stretching swell to realize you’re in the middle of a Bus Gas epic. The soundscape wears on with incredible patience, creating a strong sense of foreboding that waits for sensory overload to resolve.

The liner notes for Live On Leave Us proclaim the band’s move from improvisational performance to deliberate song construction, a self-assessment the album delivers on in-full. While the number and depth of each layer are often indecipherable, the resulting moods are strikingly powerful. It’s live performance — recorded July 14, 2016 by Ian Aeillo — is a familiar remnant of Snake Hymns and gives the album a natural feel.

Listen to Live On Leave Us below. Digital and cassette copies can be purchased via Spring Break Tapes here.

View the show’s schedule of performances below. Tickets are $25 for general admission, $15 for student or youth; find them here.

Plan for the weekend ahead with our statewide calendar here. Contribute upcoming shows, news tips, story ideas and more goings on by emailing news@hearnebraska.org. Follow us on Twitter and Instagram (@hearnebraska).