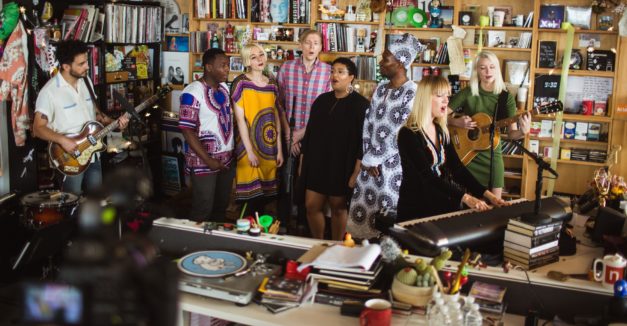 When Mynabirds, the Laura Burhenn-led indie pop songwriting project, appeared on NPR’s most recent Tiny Desk contest, it was somewhat of an anomaly. “I’m not one to repeat artists,” producer Bob Boilen writes in the video’s introduction, citing a desire to challenge new and different artists with the performance space.

This time, however, the story behind Burhenn’s latest album Be Here Now pushed Boilen and the NPR crew to make an exception. Recorded in the wake of the 2016 presidential election and inspired by the ensuing Women’s March, her politically charged new record is as unflinchingly direct as any previous Mynabirds work while channeling her message of love toward a specific cause.

While Burhenn recorded Be Here Now, the current presidential administration issued a travel ban affecting six Muslim majority countries. As Boilen writes, not only did Burhenn address the move in song, she reached out to some friends at Omaha’s Refugee Empowerment Center and found the Umoja Choir, members of which hail from The Congo, Rwanda, Tanzania, Uganda and Zambia. Some contributed performance to “Hold On”, and Burhenn has since launched a campaign to help them record their own music.

If you’re interested in supporting the Umoja Choir’s new record, this weekend offers an opportunity to do so in person.

Choir leaders Eric Esron and Dieudonné Manirakiza, along with friends of the choir Bridget McQuillan and Tessa Wedberg, will host a fundraising concert Friday from 6 to 9:30 p.m. at 3904 Farnam Street (the old Pulp space). The Umoja Choir will perform, along with Bhutanese musician DB Tamang, dancer Sarah Rowe and Lincoln soul project Mesonjixx.

As we mentioned above, the Umoja (“unity” in Swahili) Choir was founded in 2010 by Manirakiza and Erson, both refugees who had landed in Omaha and who sought a creative outlet for their community. It eventually grew to include members from Kenya, Rwanda, Congo, Uganda and Tanzania.

The Mynabirds’ Burhenn has thrown her support behind the choir since meeting them while recording her most recent album. She created GoFundMe campaign to to help fund recording costs and created a video explaining why, which can be seen below.

Event entry is by $10 donation, and with limited space, seat are first-come first-served. Snacks will be provided by Amsterdam Falafel & Kabob, desserts by Hardy Coffee Company and both alcoholic and nonalcoholic refreshments will be available. RSVP here.

Here’s a quick look at what’s going on early this week. Plan your week with our statewide calendar here and add your own upcoming events with the contribute feature here.

Hear Nebraska FM on 89.3 FM KZUM – We’re live on the air tonight from 8-10 p.m., spinning the latest and greatest in Nebraska music for Lincoln nonprofit radio station KZUM. Tune in to 89.3 FM in Lincoln or stream live at kzum.org or the Tune In app. Follow us here.

Trash Talk with Jocko, Justified Aggression at Vega – Sacramento hardcore punk band Trash Talk comes to Lincoln Tuesday night and will perform on a bill with locals Justified Aggression and Jocko. Trash Talk has been thrashing venues since 2005, putting on some of the most intense and sweaty shows around. Need proof? Watch our video from their 2014 show at Midtown Art Supply below (and read the review here). 8 p.m., all-ages show, $15 advance. RSVP here.