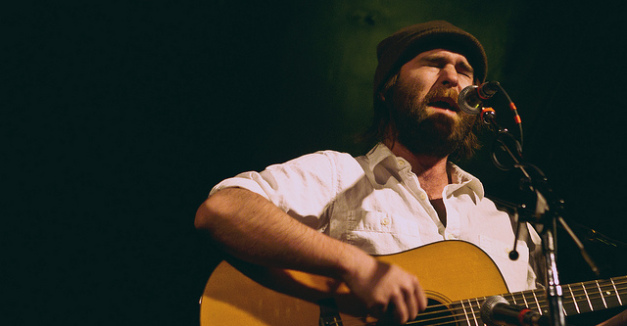 Like some past projects by Atkins (Chris the Whale, for instance), the bulk of writing and recording credits are his alone. There is a train of guest appearances here, though. The album includes contributions from members of Anniversaire, Staffers, The Decatures, Flight Metaphor, Flying Kards, Skypiper, Burkum Boys, Danny Sabra and Intergalatic Star Hero.

The full-length gives Atkins the room to stretch his legs and his songwriting style. He plays with production techniques and instrumentation. But the centerpiece is always the same — Atkins’s unmistakable voice, the one he’s been stretching like putty for years. You get the sense that either everyone in the world will hear Atkins, or he’ll break his voice trying.

Bonehart Flannigan, the songwriting vehicle of former Universe Contest bassist Jon Dell, is heading back east with Lincoln in his sights. Dell hit the road on an indefinite westward tour after Lincoln Calling in October.

Looking forward to his stop through town, we caught up with Dell to chat about his tour. So far he’s made it to the far reaches of the Northwest, traveled south down the coastline, and now turned back west.

HN: What’s been the biggest surprise?

HN: What’s being on the road solo been like?

JD: It’s been great. I miss my boys, but I have really been enjoys those long stretches of highway by myself. I am also digging the ability to sleep whenever I want.

HN: Are you being well-received?

JD: Depends on who you ask. I nearly got kicked out of the venue in Santa Barbara, but I have also made some amazing friends in random places like Walla Walla, Washington.

JD: Hard to say. San Francisco was super cool, but so were a lot of other places for different reasons (like Walla Walla). That’s like trying to pick my favorite band or my favorite song.

HN: You’ve been doing a lot of parks-seeing. What’s your favorite thing that wasn’t a show so far?

JD: Impossible to choose. The ocean was incredible, but so was Yellowstone and Joshua Tree and Multnomah Falls and countless other things. I have seen so many beautiful places and met so many amazing people. This is a beautiful country, and most musicians/people work too hard. Sorry I am so indecisive, I’ve just seen too much cool shit.

Orenda Fink may have finished up the huge promotional run and national tour for her Saddle Creek album Blue Dream, but she’s not letting off the gas yet. Yesterday, she announced a batch of tour dates in support of Jenny Lewis.

Cursive added a Lincoln date to its The Ugly Organ reissue tour.

They play The Waiting Room on Mar. 21 (RSVP). It was announced yesterday they’ll play Vega the following night. RSVP here.

Read our in-depth retrospective of Cursive’s The Ugly Organ here. You can stream the entire remastered album over at A.V. Club.

At Zoo Bar, a pair of Stopping The Pipeline Rocks participants, Jack Hotel and John Walker and the New Hokum Boys, are playing. RSVP here.

KZUM’s X-Rated: Women in Music show hosts vocal and piano trio Xion today. On Tuesday, we premiered a new Sonata Session featuring Mary Lawson, one of the vocalists for Xion. Tune into 89.3 FM or stream at kzum.org from 1:30-3 p.m. today to catch the on-air performance.