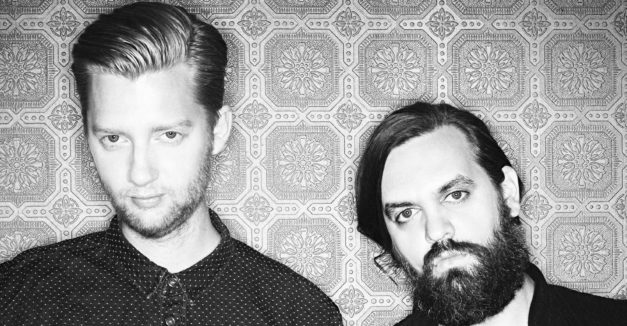 While Eli Mardock prepared for last October’s one-off resurrection of Eagle Seagull, he was also putting the finishing touches on new material. Not for the bygone Lincoln indie pop band, but a new collaboration with a similar dancey bent.

Mardock and Hamburg, Germany-based drummer/producer Lucas Kochbeck, as The Kiez, release their first offerings today. “We Play” and “Take Me Higher” are two of 17 tracks which came of a three-week session at Monopalast, Kochbeck’s Hamburg studio.

The pair initially met via email through mutual friends, hitting it off after exchanging past projects and song ideas. Kochbeck was in Nebraska last fall, wrapping the recordings with help from guitarist Myles Jasnowski (Mesonjixx, A Ferocious Jungle Cat) and James Fleege at Silver Street Records. Kochbeck also sat in for the aforementioned Eagle Seagull show.

Both songs smack of Mardock’s brooding, organ-driven pop sensibility and, lyrically, a brazen disregard for obstacles to self-indulgence. Jasnowski adds a driving lead guitar to the “We Play” chorus, the lyrics of which describe a quickly-resolved conflict regarding a forbidden fling. “Take Me Higher” gleams and bounces as its voice passionately offers to take the low road for its lover.

Hear both tracks by The Kiez below:

Trapper Schoepp and his Milwaukee, Wisconsin band the Shades were driving home through Nebraska in December 2012 having just opened for Social Distortion in Disneyland. When they hit Ogallala, so did the snowstorm.

“They shut down the interstate for two days on us,” Schoepp says. “So we holed up at a Super 8, watched the new Hobbit movie, ate Chinese food and just watched the clock tick.”

The band’s unfortunate pit stop is the subject of Schoepp’s new song “Ogallala.” The dreamy pop track, from the singer/songwriter’s April 1 LP Rangers & Valentines, comes accompanied by an illustrated video which helps re-tell the story.

HN interviewed Schoepp just two months before that fateful evening, previewing its opening slot for the Wallflowers at Slowdown. Schoepp says he has no planned dates in Nebraska yet, but is planning a nationwide tour to support the new album.

“Holla” at HN for Mother’s Day

Daughters and sons, Mother’s Day is this Sunday, and we want to honor your musical moms — those who instilled a love for listening to, watching, performing or volunteering in music.

Call our free hotline — 231-HOLLAHN — and leave a message to/tribute for your mom before 9 p.m. Thursday. We’ll share them on Friday. *Make sure to tell us both your names, and if you’re in a band, tell us that, too.*

Tonight, The Front Bottoms play Slowdown with Brick + Mortar and Diet Cig. The Front Bottoms released its fifth LP Back On Top Sept. 18 on New York-based Fueled By Ramen Records. New Jersey-based indie rock duo Brick + Mortar are preparing to release one of their own later this year. And Diet Cig, one of the hotter up-and-coming bands this year, gives Omaha a test-run before its Maha Music Festival appearance in August. Tickets are $21, RSVP here.

And tonight at Duffy’s Tavern, Omaha hip-hop duo Both plays for $1 Dad’s Beer Night with Lincoln hip-hop artists Hakim and Dey-Jean. As always, entry is by donation, and with beer so cheap, don’t be shy about supporting local acts. RSVP here.

For a fuller listing of this week’s shows, head to our statewide calendar here. Share news tips, story ideas and upcoming events via email at news@hearnebraska.org.