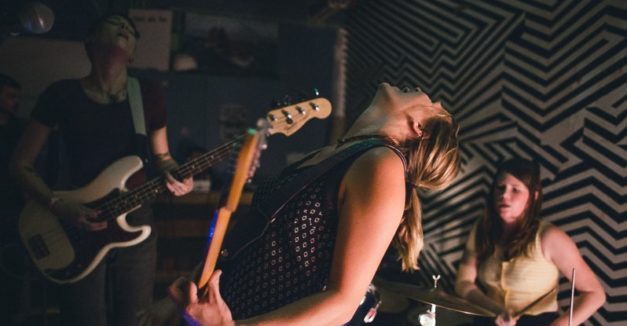 It has been nearly a year and a half since we’ve heard from Manic Pixie Dream Girls, with their members now busy with other projects, but the band has popped back up with a batch of recordings.

The trio has released full-length album Babe Rock. Recorded some time ago and unmixed (according to the band’s Facebook page), it features nine tracks-worth of the band’s signature garage rock sound, with Mari Matz, Rachel Tomlinson-Dick and Monica Maher all taking songwriting turns.

The album release comes as a nice surprise, given that the band’s most recent show (as far as we can tell) was at the inaugural Benson First Friday Femme Fest in September 2015. They are all, however, still active; Matz fronts Omaha rock band Muscle Cousins, while Tomlinson-Dick and Maher are both in new trios Bien Fang and The Morbs, respectively.

Listen to Babe Rock below and at MPDG’s Bandcamp page here.

Columbus-natives Ghost Town Radio opened the show with a set of heavy-handed songs, reflective of influences ranging from classic rock to modern alt-rock. Included in the set was a venerating cover of Black Sabbath’s “Paranoid.” Vocalist Bryan Lasley mumbled, sang and shouted into the microphone as the rest of the band filled out the alternative sound. 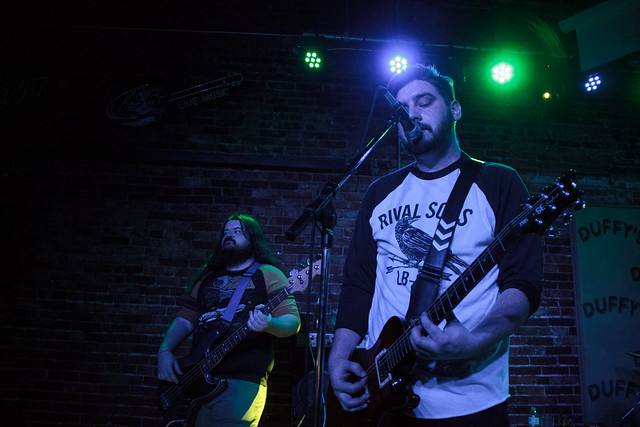 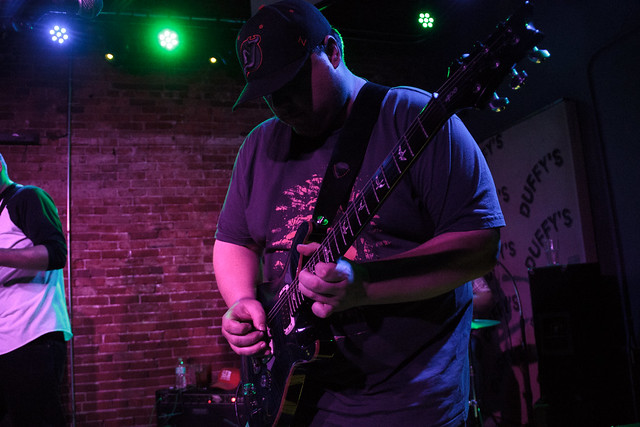 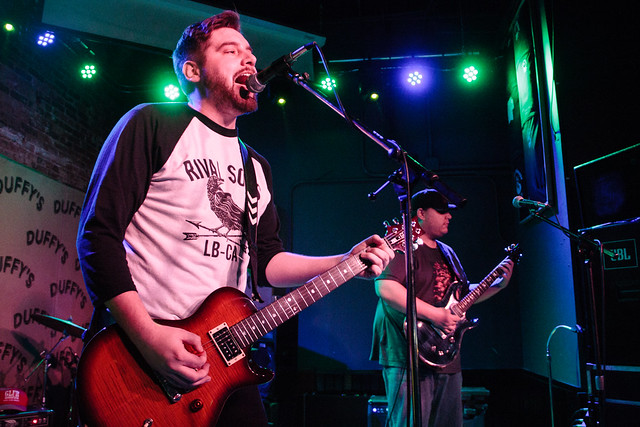 The last time Bogusman stood on an indoor Duffy’s stage was in front of a rowdy bar overflowing with eager fans, ready to pick up a copy of their self-titled LP. The band brought the same amount of energy and musicality to this show in a fashion that was reminiscent of last summer’s release show. The audience bounced and danced to the aggressive, sometimes technical, performance. Drummer Jackson Trover pushed the tempo back and forth throughout the set, keeping fans on their toes. Some fans sang the chorus to “Song About Chess” while guitarist/vocalist Nathaniel Luginbill sang the catchy hook into the microphone. Closing the set with the lengthy “Tina,” Luginbill, guitarist Lee Lohrberg and bassist Andy Pederson traded off solos, electrifying the crowd. A new-found Lincoln staple, Bogusman recently released a music video for its song “Appendectomy.” 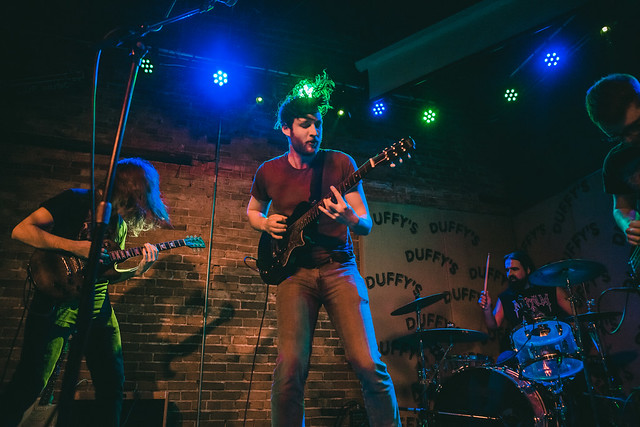 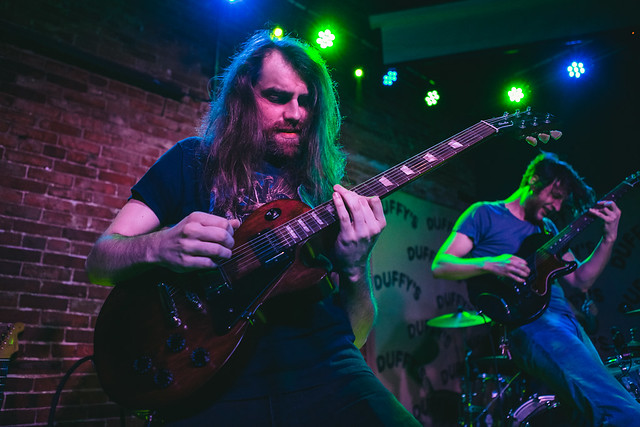 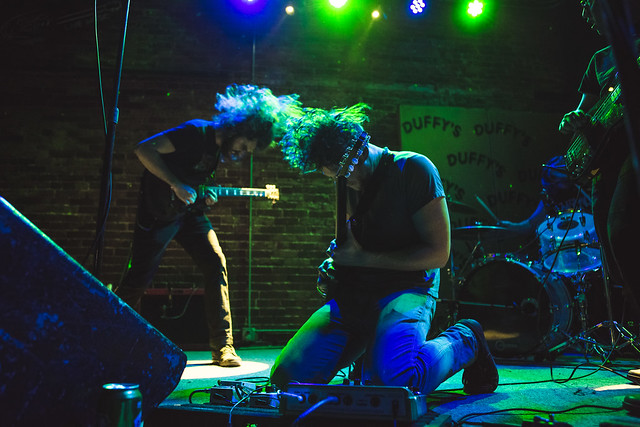 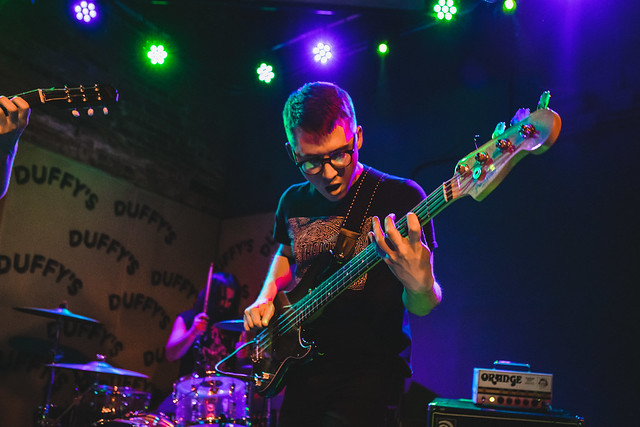 BANDITS hit the ground running with a soaring, fuzzy mess of a song that aptly demanded listeners’ attention. As guitarist and vocalist John Demitro sang into a retro telephone, it sounded like the audience was on the other end of the line. Originally a sibling duo, drummer Andrew Oakley was added later. Oakley played drums loosely and comfortably, accenting and driving the band’s sound, while Lulu Demitro played swift bass grooves that filled out the lower end. Then, as led by a clean, delay-ridden lead guitar, the band retreated into a timid bridge, only to soon erupt into a chaotic climb to the end of the song. The rest of the set continued on as a spectacle of animated stage presence and uncompromising rock and roll, including a vicious cover of “Happiness is a Warm Gun” by the Beatles which featured vocal interplay between Lulu and John. The effortless confidence and charm throughout BANDITS’ set had a unique and lasting impact that will not soon be forgotten. 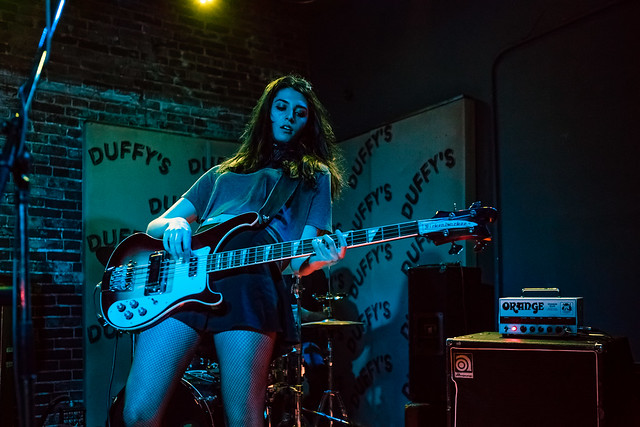 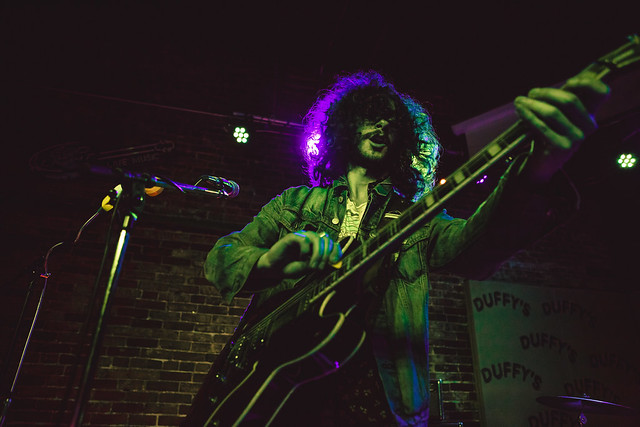 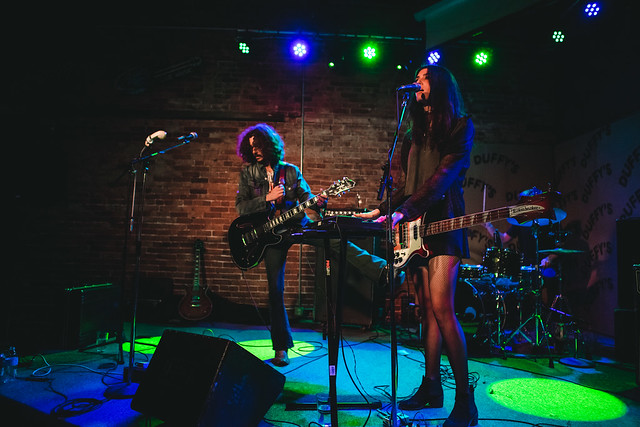 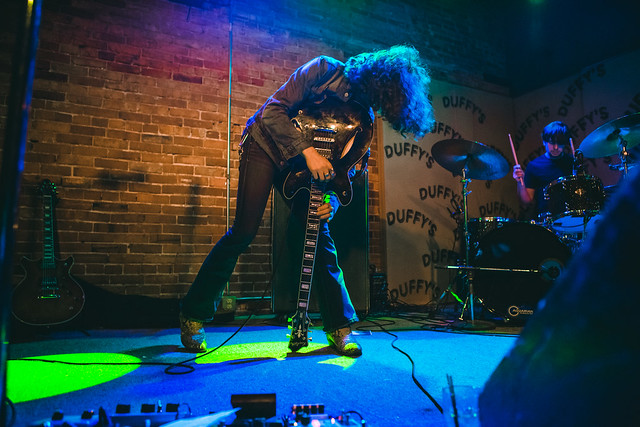 “Brighton Pier” reminisces on a day spent with a loved one at the English arcade and pleasure pier. Deluca’s voice is gentle and warm, conveying both a fondness and a longing.

Listen to the single below:

Nebraska Arts Council is hosting a series of grant workshops designed to assist everyone from first timers to those working on specific grants. The first one is today at 3 p.m. at NAC’s Omaha office, and is open to the public. See the schedule and details below and find more info here.

During this workshop, individuals will participate in an NAC mock grant review panel. This workshop is designed for current NAC grant applicants or individuals preparing to write an NAC application for the first time. Attendees will review sample applications and discuss the strengths and weaknesses of each, focusing on key elements such as budget itemization, outreach to diverse populations and clear, concise narratives.

This workshop is designed for individuals who are unfamiliar with NAC and the nonprofit organization Humanities Nebraska. Attendees will learn about the mission and structure of each, as well as grant categories, deadlines and other opportunities.

This workshop is designed for current grant applicants who have specific questions about completing an NAC application. During this session, NAC staff will address common problems with grant applications and make recommendations for better narratives, budgets and required materials.