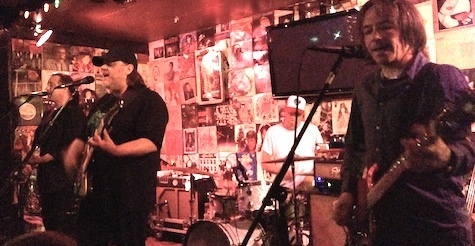 It was nothing less than a dream come true for Matthew Sweet fans. There he was, literally steps in front of them, surrounded by a top-notch band playing all of his “greatest hits” one after the other in fine voice. As Sweet said, it was like playing a gig in someone’s living room.

Earlier in the day Sweet apparently hauled in his own PA to bolster O’Leaver’s modest system. Speaker stacks were balanced on either side of the the club’s staging area. I was told 100 tickets were sold for this show, but the crowd was probably two-thirds that size — I’ve seen it more crowded in there at Digital Leather shows. With the tables taken out, there was plenty of room up and around the band. Sweet seemed to like the proximity to his fans. “I’m used to looking down on you.” Not last night.

Next up was surprise “special guest” Tommy Keene, an East Coast-based singer songwriter who Replacements fans may remember for having played guitar with a touring Paul Westerberg in the late ’90s. I remember him from his handful of solo albums released on Matador earlier in that same decade. Keene was always a first-rate songwriter who despite a sizable push by Cosloy and Co. never took off as everyone had hoped.

With a 12-string and later an electric guitar, Keene played a selection of tunes from his career, closing out the set backed by the band that would back Sweet. And what a band it was. Consisting of two members of Velvet Crush, bassist Paul Chastain and drummer Ric Menck, they were joined by guitar-slinger Dennis Taylor who shared grinding leads with Sweet all evening.

Sweet was all business as he rolled through an hour-plus-long set that included just about every song any fan would want to hear, drawing heavily from his classic ’90s breakthrough album, Girlfriend. We’re talking “Winona,” “Evangeline,” the title track, and on and on, spanning through songs off Altered Beast and 100% Fun and beyond.

It really was a greatest hits show for Sweet fans who will not be disappointed if they make the trek to Lincoln to see him perform again tonight. That show, at the shiny new Vega, will be a completely different and no doubt more detached experience than the reach-out-and-touch-him intimacy of last night’s O’Leaver’s show. I wonder if anyone happened to record it…?

In this week’s column, the quarterly album reviews round-up (featuring an exciting new rating system!) including thoughts on new ones by Strand of Oaks, Courtney Barnett, Alvvays, Mark Kozelek, Digital Leather, Gold-Bears, Mitch Gettman, The Both, Bob Mould, Orenda Fink and more. It’s in this week’s issue of The Reader or online right here.

Tonight also is the public opening of 1912, the new bar and roof-top deck across the street from The Waiting Room. Drop by and grab a cold one and get a whole new view of Benson.