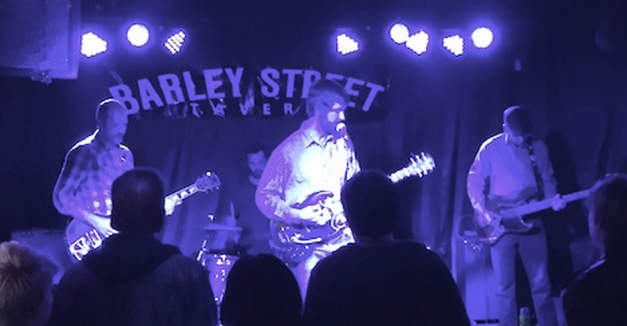 I found the buzz and howl of Calm Fur to be rather sublime — a psychedelic cascade of noise and color and sound that blended every ’60s arena rock acid trip with the post-modern noise of, say, Sonic Youth to create a wholly new and cumbersome thing.

It didn’t come easy; it took awhile for the band to get into a groove.  Wearing a white-fur jacket (epitomizing the band’s name) frontman Jason Meyer has emerged as Omaha’s version of Wayne Coyne, a colorful, arty dude who isn’t happy with just playing shows. Instead, his gigs are audio-visual-powered “happenings.” Think back to one of those notable Talking Mountain shows (one of Meyre’s other bands) where smoke broiled out the club’s doors and audience members wore sun glasses to protect their eyes from blazing LED light rigs.

Meyer shows always involve special effects panache, even if it’s just a couple guys wearing furry Muppet-style masks. For Calm Fur, the enhanced experience involved two overhead projectors set up on either side of the Barley Street stage, along with an assortment of markers, glitter and confetti. Audience members were invited to come up during the set and let their creative spirit run wild, but no one did, at least not until about halfway through their set when a young women began scribbling with a marker which washed out over the band. Psychedelic, man.

Give credit to Meyer. Nothing is more boring than watching a bunch of guys slumped over their instrument, hardly moving. Meyer doesn’t want to fall into that sanguine trap, though no special effects were necessary to make Friday night’s set interesting… or at least different.

Like I said, it took awhile for the band to get things going. When they started out, I wondered why Meyer wanted that keyboard to fuss up the sound. By the third song I was thinking ‘That keyboard really makes this work.” I don’t know who keyboardist “Jesy” is, but her simple tones and style (and voice) were the perfect complements to Garrett Schmelzel from Snake Island’s acidic 12-string electric guitar and Meyer’s ever-droning bass. By the fourth or fifth song, the band hit its stride and even had me buzzing. They followed it with a couple shaky covers that featured the next performer, Slushy.

Slushy is former Omahan (and Talking Mountains guy) Chris Kramer doing his rendition of Nuggets-era pop songs sung alone over pre-recorded tracks, karaoke style. Kramer’s choice of music and his aerobic-styles performance made for a fun set, at least for the first 15 minutes. I’m told that Kramer has a working band he plays with in Chicago. Someone needs to get those folks out here.

Finally sometime after midnight The Lupines took the stage, basking in the full intensity of Barley Street’s fancy new digital lighting system, which cast them in eerie electric blue. What more to say about Lupines that I haven’t already said, other than you need to check them out if your thing is blistering garage rock. It was a great way to cap off what turned out to be a looong night.