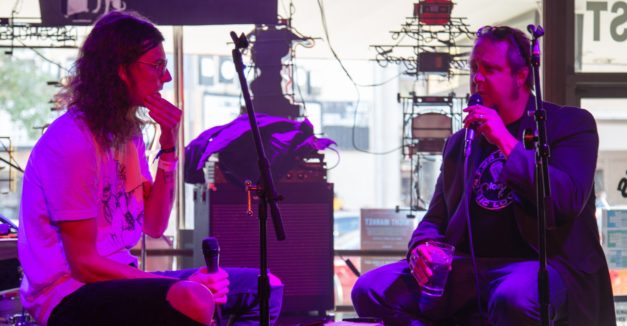 While making the rounds at Lincoln Calling, you might have seen comedian and podcast host Joey Zimmerman on the Duffy’s Tavern and Bodega’s Alley stages with various local musicians, giving audiences a sort of behind-the-scenes look into what they do.

The Lincoln ex-pat and current Austin resident has compiled those interviews into the latest episode of The Listening Room, his storytelling podcast which highlights figures in music, comedy and more. During the fest, he recorded conversations with JP Davis and Marina Kushner from I Forgot To Love My Father, who talk about assembling their large roster; Lincoln indie rock band Salt Creek, which explained how it balances positive and negative attitudes; Josh Hoyer of Lincoln soul band Josh Hoyer & Soul Colossal, which just recently finished a successful European tour; Raws Schlesinger of Plack Blague, who tells Joey why he isn’t your typical DJ; and Icky Blossoms vocalist Sarah Bohling on how TV On The Radio’s Dave Sitek found their demo tape.

Listen to the podcast below and subscribe to The Listening Room via iTunes here.

What a weekend it will be: rain in the forecast, no Husker football and plenty of music-related reasons to be inside. Check out our picks below and view a fuller listing at our statewide event calendar here. Tell us where you’re going in the comments, and send news tips, story ideas and song submissions to news@hearnebraska.org.

Satchel Grande w/ Domestic Blend at Slowdown – Get a heavy dose of an Omaha funk mainstay alongside soul/rock band Domestic Blend. The latter will play songs from its forthcoming debut EP, which drops in mid-November. Main room, 9 p.m., $8, RSVP here.

The Natural States, Number One Hit Kids, Anonymous Henchman at Brothers Lounge – Omaha surf rock band Anonymous Henchman is fresh off its second studio full-length The Coming Thing!, out digitally Sept. 15. It packs all the punch and loads of reverb one can expect from the genre, with a slight, mysterious twist befitting the band’s adoration for espionage. Listen here. 9 p.m. show, $5, RSVP here.

Rothsteen, CJ Mills at Reverb Lounge – In Benson, mellow out with two great vocal talents and all the R&B and soul you can handle. Notably, Rothsteen just recently released his third EP Moments After, the third in a three-part series. Check it out here. 9 p.m. show, all-ages, $7, RSVP here.

The Rewind album release show at The Bay – Lincoln hard rock band The Rewind released its debut album Casting Shadows digitally on Sept. 1 and this weekend will give it the official christening at an album release show Saturday at The Bay. Recorded over the last five years, the album draws on several elements of classic rock, from soaring choruses to deft fretwork. Ghost Town Radio and The Other Side Of Now open the show. 7:30 p.m. show, $5, RSVP here.