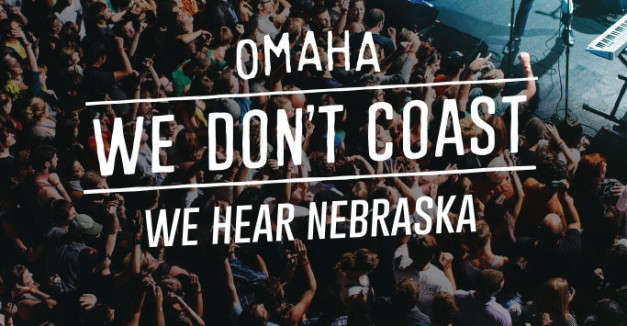 We teamed up with GOCC to soundtrack the slogan with our compilation of Omaha musicians: We Don’t Coast. We Hear Nebraska. The mix ranges from party-funk outfit Satchel Grande to the experimental electronic sounds of Darren Keen and includes the dark-pop group Icky Blossoms. No matter the track, it certainly shows a more light-hearted side to the music of the city made famous by lyrics like “I want a lover I don’t have to love, I want a boy who’s so drunk he doesn’t talk.”

“A premier Midwest port for music and arts, Omaha is home to world-class talent across genres. And its diverse venues host exceptional touring artists every single night.

But it’s critical that the word continue to spread, and that the city’s arts culture be not only welcoming, but easily navigable. In that way, the nonprofit Hear Nebraska serves as a lighthouse.

So from our headquarters in the country’s heart, we curated this 10-song digital compilation to cast a sort of sonic beam — aiming to expose both natives and would-be voyagers to some of Omaha’s most compelling musical talent. And in an effort to embrace and celebrate the city’s ‘We Don’t Coast’ campaign, we thought it appropriate to pack this thing with great party/dance tracks.

Drop anchor, and play it loud.”

Simon Joyner’s out on the road right now playing a couple solo shows, one tonight in Atlanta. Creative Loafing talked to the Joyner about “11 essential releases” from the singer-songwriter as a primer for his show. Not 11 songs. Eleven releases, as in albums (and one split with Mountain Goats).

For context, you could probably find 11 individual releases from Conor Oberst or Tim Kasher, but would you even want to? Surely it wouldn’t be long before you were churning up Park Ave. or Commander Venus or too-early Bright Eyes records for the list. Any other Nebraska musicians with such a healthy catalogue?

Joyner talks about the experience recording 1994’s The Cowardly Traveller Pays His Toll, saying it’s the first time he truly was interested in the recording process. Recording it in a living room, he says, “Chris Deden and I worked on this together. We were so young and unlearned, instead of tuning my guitar to the very out of tune piano in the house, Chris figured out how to play ‘Target’ using all black keys. It wasn’t until we were done that Alex McManus said, ‘Why didn’t you just tune Si’s guitar to the piano?’”

The article is a good reminder of Joyner’s impressive body of work and an interesting glimpse at how a perpetual Omaha darling might be revered elsewhere.

Adam Hawkins of It’s True and Eros and the Eschaton launched a Kickstarter campaign with HN contributor, his partner and other half of Eros and the Eschaton, Katey Sleeveless, to build an “affordable recording studio for local musicians” in Colorado Springs. That’s where he and Sleeveless recently moved from Greensboro, N.C. The studio would price based on scope of project rather than by an hourly rate, which can accrue quickly.

The rewards are pretty sweet. Making good on his campaign’s mission, for donating $500, up to two backers can record a full-length album in his studio. For $250, an EP. Both stellar deals. For $125, you get a 40-minute It’s True set, via Skype if you’re outside the Colorado Springs area.

As of now, the campaign has 36 days to go and has raised about $1500 toward its goal of $8300. It looks like that money goes solely to equipment.

Twinsmith is headed to Cincinnati in September for Midpoint Music Fest. This on the heels of announcing they’ll also play Pygmalion Festival in September, makes me think they’re a pretty perfect low-billing festival band right now: high energy, very palatable, and as guitarist Matt Regner tells MPMF, “there are chill surf vibes underneath everything.”

Lest we forget, there is new a Mynabirds album on the way. Via Instagram, frontwoman Laura Burhenn hinted there will be toy keyboards and South African radios — where Burhenn was touring in July— on the forthcoming work. The former is hardly surprising, but it’s nice to be reminded an album is still in the works. The record would follow up 2012’s Generals, which came out on Saddle Creek.

Back in April, Burhenn posted on Facebook that she’s deep into making the new record. Unfortunately for us, we now claim Mynabirds music as Nebraskan via adoption, since Burhenn relocated to Los Angeles several months ago. For some larger context, Lazy-i’s Tim McMahan wrote this column in March about musicians leaving and immigrating to our state.