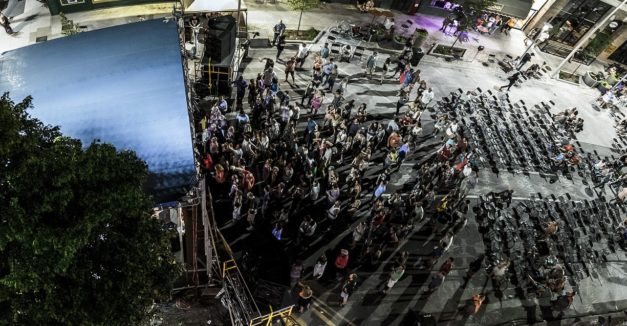 Early-bird passes for Lincoln Calling, Oct 6-8, are now available at the festival’s website, which went live this morning. They exist in limited quantities, and once sold, the price jumps to $39, and finally $49. Find them here.

Two tiers of VIP passes are also on-sale today. The “Trustee” includes a three-day festival pass, access to a lounge area, food and drink tickets and additional, yet-to-be-named perks — all for $250. The “SPEED!” pass — a tribute to the 45s label SPEED! Nebraska Records — gets its holder to the front of the line at every concert, with immediate access even when shows are at capacity, for $150.

This year’s festival (operated by Hear Nebraska) features more than 100 artist and comedians on eight-plus stage over three days. The first wave of lineup announcements is set for next week.

Lincoln’s legendary blues haven celebrates another birthday this weekend, and by tradition, will close down 14th Street for some of the nation’s best in blues, roots, funk and Americana.

Simien returns to Lincoln after playing Fallbrook restaurant SchillingBridge’s Rhythm & Brews festival last year. With his band the Zydeco Experience, Simien has played more than 7,000 international performances in more than 40 countries, and won the 2008 “Best Zydeco or Cajun Music Album” Grammy award for his album Live! Worldwide. He is scheduled to perform Friday night at 11 p.m.

Hill will follow the next night at roughly 9 p.m. Hailed as “The Southern Fireball,” Hill’s mix of blues, soul and raw rock ‘n’ roll stems from her punk rock roots, and has captured the praise from the national blues scene. Most recently, she independently released full-length album Heavy Hearts, Hard Fists last year.

A new independent record label has emerged in Omaha.

Ricordo Sounds announced its founding yesterday, along with a forthcoming releases from Omaha troubadour Simon Joyner and Omaha band Sucettes.

The new label is run by CJ Olson and Jeremiah McIntyre (both of Sucettes) and ARC engineer Adam Roberts. Olson, who has worked for Saddle Creek Records for more than a decade, says the label started as a way to release the band’s heretofore digital 7-inch Pillow Dread.

“We thought it would be nice to just start a label of our own rather than trying to send it around to existing labels for consideration,” Olson says. “It didn’t seem like the learning curve would be too steep and that it’d be a fun undertaking to start up a little label.”

The trio mentioned the label to Joyner while in the midst of development, Olson says. The Omaha singer/songwriter happened to be looking for an outlet for a pair of unreleased songs, which will see daylight as 7-inch record Why Don’t You Come Back Around?

Olson says the label is keeping things relatively low-key at the moment. They have spoken with a few other bands about working together, but are waiting to see how these first releases are received.

“Hopefully things go well and we can keep working to spread the music of our friends and artists that we love,” Olson says.

Pillow Dread is available digitally and on vinyl now through Ricordo’s Bandcamp page here. Joyner’s Why Don’t You Come Back Around? drops July 29, and can be pre-ordered here.

Tonight, Death Cab For Cutie plays Stir Concert Cove, 1 Harrahs Blvd. It’s the Seattle band’s first show in the area since its 2014 Maha Music Festival appearance, and first without guitarist/founding member Chris Walla. 2015 release Kintsugi was the band’s first record not produced by Walla, and though it was Grammy-nominated for “Best Rock Album” that year, some critics have soured at the lack of balance in Walla’s absence. But there’s still good old-fashioned Death Cab to be found on that album, and the band typically revisits old material in concert. Another Maha alumn, Thao & the Get Down Stay Down, opens the show. RSVP here.

For a fuller listing of tonight’s shows, head to our statewide calendar here. If you do not see your show or one you plan to attend, leave it in the comments or add it yourself using our “Contribute” feature here.