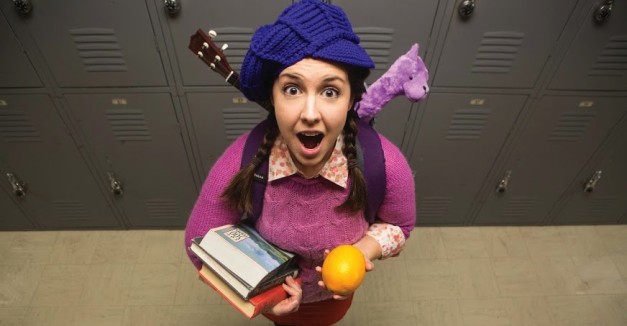 When the 2015 Lincoln Vital Signs report was released, profiling the community’s economic, health, education and safety statuses, one detail in particular caught playwright Becky Boesen’s eye: child hunger. According to the report, approximately 43 percent of LPS students (or 16,248) participate in the Free or Reduced Lunch Program. Nearly 13,700 receive free lunch.

It’s why the Lied Center commissioned her third production, Puddin’ And The Grumble, co-written by composer David von Kampen. The production, which runs for two weekends starting March 10, follows a fifth grader as she experiences family and personal troubles, all while battling “the grumble.” The physical manifestation of her hunger, “the grumble” causes her to make uncharacteristically questionable decisions.

“The arts have a way of making difficult topics more approachable,” Executive Director of the Lied Center Bill Stephan said in a statement. “Our hope is that ‘Puddin’ and the Grumble’ will spark a dialogue in our community creating greater awareness of the challenges we face and most importantly, help us arrive at a solution.”

Before starting work on the script, Boesen and producer Petra Wahlqvist dug into the facts and the stories behind them. They visited the Food Bank of Lincoln, which started the weekend food backpack program throughout Lincoln Public Schools, which sends needy children home Friday afternoons with food for the weekend. Boesen taught an after-school program at Clinton Elementary, where roughly 75-percent of children participate in the backpack program. She says she was shocked to learn that some are on a waiting list.

“Teachers had several students who would eat hot lunch friday, and literally would not eat until breakfast on monday,” Boesen says.

The city-wide statistics are no less astounding. While Lincoln boasts better than national averages in employment rates, cost of living and overall well-being, its poverty rate exceeds the national average. According to the vital signs report, roughly 20 percent of Lincoln children (or 12,100) live in poverty, the largest proportion of any age group.

Boesen says that where a 40-hour-per-week worker might long for the Friday whistle, she now dreads it. Think about what happens when you skip lunch. Now imagine taking on household duties, schoolwork and expectations on a weekend-long empty stomach, she says. The vital signs report supports this sentiment, citing an 11-percent deficiency in third-grade reading level for students who receive free or reduced lunch.

“No way we can expect the best out of our children if we’re not willing to take care of them,” Boesen says.

She says the “grumble” itself, portrayed by an actress, shows up and terrorizes the musical’s young protagonist. Rather than sugar-coating the problem, Boesen wanted an almost Tyler-Durden-like inner personality (a la Fight Club), one that echoed the challenges caused by chronic hunger. She hopes it gives the audience a chance to experience it in a visceral way.

“I don’t want to dictate to an audience how to feel something,” Boesen says. “That’s not my place. But it’s my job to allow them the opportunity to feel something. I can’t go to bed at night or look at myself in the mirror if the grumble is Strawberry Shortcake”

The production itself isn’t all doom and gloom. With Puddin’ and the Grumble, Boesen takes aim at child hunger in a mix of whimsy and naked truth. The young protagonist’s grandmother, charged with caring for her as her mother works multiple jobs, is an ex-lounge singer. Von Kampen’s score is uplifting, featuring styles ranging from cha-cha to rap to standard harmony-laden musical numbers.

In the end, Boesen hopes her production will challenge audiences to think carefully about child hunger and how to tackle it head-on.

“We can make Lincoln a great city in the area, but we can’t go around this hunger problem,” Boesen says. “We have to go right at it and solve it.”

The Lied Center’s production of Puddin’ and the Grumble opens Thursday, March 10 and runs for two weekends March 10-13 and 18-20. While the first three showings are sold out, tickets ($22 for general public, $11 for students and 18 and under) can be purchased for the remaining run here.

Omaha rock quartet Uh Oh has released a brand new single “Drunk In The Snow,” and its corresponding video depicts about what you’d expect: a kitchen table pre-game, a Jeep-pulled sled and a whole host of other antics.

The track itself is textbook upbeat Uh Oh, with the exception of a highly prevalent synth that adds a kind of bob-along quality. Vocalist Joe Champion raspily proclaims the snow his home, backing it up with shirtless sled footage.

Uh Oh recorded the track at guitarist Scott Ausdemore’s basement, Champion tells us via email. The band plans to begin work on a new EP this Spring.

Hear “Drunk In The Snow” and watch the video below (parts of which are NSFW):

We’ve also added artist submissions from Lincoln songwriter Karen Choi, who released full-length album Through Our Veins week; Jens Lehman, who plays his second show with The Mysterious Effect Thursday at Zoo Bar; and Omaha band The Cosmic Smiths, who released Sunrise On A Swingset earlier this week.

Check it out at the top of our homepage.

Tonight, Minneapolis hardcore punk band Lemonade plays Milk Run, 1907 Leavenworth St, with Omaha’s Bib, Sophie Hug & the Kisses, Dumb Beach and Jocko. For Bib, it kicks of a spurt of Midwest/East Coast touring over the next month. The all-ages show starts at 9 p.m., costs $5 and promises to be fast and loud. RSVP here.