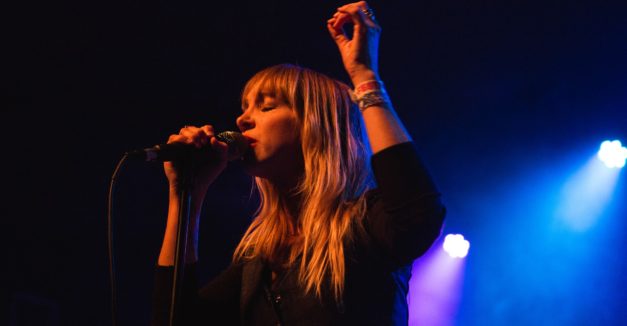 We often invoke the phrase “like comparing apples and oranges” when working with two unlike concepts or things. But how does one judge one fruit against another when the latter has yet to reveal itself?

Laura Burhenn confronts this puzzle in her latest single “Apples & Oranges” released Tuesday via Spotify and featured on NPR Music’s “All Songs Considered” podcast. That gentle, ethereal song, she tells NPR’s Bob Boilen, was written in reaction to facing the “yawning black void” of the future. Rather than fret over it or compare it to the present, it’s best to face things head on.

The new single — as well as its B-Side, “Good Medicine” — were recorded with Mike Mogis, and feature playing by cellist Heather McIntosh and ARC’s Ben Brodin.

The Mynabirds singer/songwriter’s new music comes ahead of a month-long nationwide solo tour, which starts Saturday, Oct 29 at O’Leaver’s with Annie Dilocker and Anna McClellan. Many of the dates are with singer/songwriter William Fitzsimmons. RSVP here and see full dates here.

Listen to both new tracks below:

Watch both performances below:

In contemplating Omaha Bicycle Co’s fourth anniversary, owner Sarah Johnson says it’s the community that has made her shop a continued staple of the Benson neighborhood.

“Oh, and caffeine,” she writes via email. “Caffeine is pretty helpful for pulling open to close days.”

This Saturday, OBC celebrates the milestone with a party at its location at 6015 Maple St. Attendees won’t only be celebrating the shop’s presence on the Maple Street drag; their support will also benefit Johnson, who is dealing with medical bills after a mix-up with her health insurance company.

“I’m not always great at asking for help so this is actually kind of great,” Johnson says.

Of OBC’s run, Johnson says support from the community has been overwhelming from day one, whether it’s been in volunteer form or monetary donation. She also acknowledges that while it has become increasingly difficult to compete in the internet age, much of what they do is event-based, which strengthens the shop’s community standing.

“Sometimes it seems like we just opened a few weeks ago and I can’t believe that people are coming through the door and sometimes it feels like it’s been there forever,” Johnson says. “I think being more than just a place to buy stuff is pretty important to setting us apart from Amazon.”

The event will feature music from Faerie Tones, the release of OBC’s original zine, new seasonal merchandise and a silent auction with gear/services from Parlour 1887, Omaha Yoga & Bodywork Center, paperdoll., Jake’s Cigars, Krug Park and Hear Nebraska. Costumes are encouraged, and there will be snacks and a birthday cake from Two Birds Bakery.

OBC will collect a suggested donation of $10 at the door, which gets attendees snacks and immediate entry to the raffle. RSVP here.

Crushed Out with Bruiser Queen, The Sub-Vectors and Huge Fucking Waves at O’Leaver’s: 9 p.m., 21-plus, $5, RSVP here.