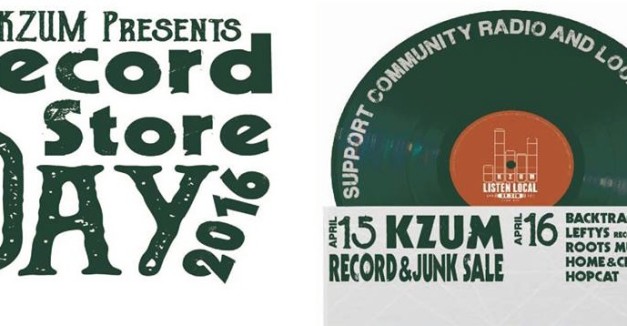 Record Store Day is two days away, but Lincolnites hungry for the classic audio medium can whet their appetites a day early at KZUM.

“We thought it would be fun to join in on the RSD festivities with our local record shops and to help build the hype and awareness for a great nationally celebrated day,” Claire says. “We decided to hold our sale the day before, while developing a relationship to promote Record Store Day as a whole here in Lincoln.”

Early RSD movers will find an assortment of vinyl in both good and excellent condition — including a Japanese first-press release of The Beatles Long Tall Sally EP — as well as CDs and books.

Also, watch tomorrow for our Record Store Day round-up. Those with tips on RSD happenings in Lincoln, Omaha and Greater Nebraska can contact us at news@hearnebraska.org.

“I wanted this concert to be entirely free and to support a local organization that does great things for the community.” KRNU Music Director Jordan Howard said in an email. “I’m really impressed that [OGR] uses music to teach younger girls to be self-reliant and confident (along with many other important life skills), and those are all very cool things.”

Howard says 100-percent of donations benefit Omaha Girls Rock, and will be taken at the door. KRNU is accepting monetary donations on behalf of OGR, as well as old guitar and instrument cases per OGR’s request.

RSVP to the concert here.

Watch Kethro and his drinking buddy, Rose, sample an array of tequilas, flash Wu-Tang signs and talk “Black Magic Woman” on the latest episode of “Drinking Tequila with Strangers”:

For a fuller listing of tonight’s shows — including Faded Black with Leighton and Anthems at Duffy’s Tavern (RSVP here); and Potluck at The Lookout Lounge (RSVP here)  — head to our statewide calendar at hearnebraska.org/events. Send all news tips, story ideas or song submissions for HN Radio to news@hearnebraska.org