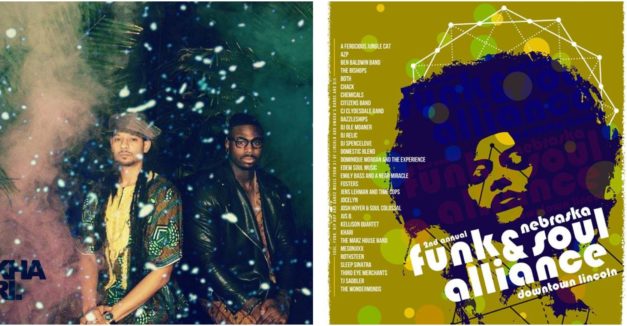 When people say music “changed their lives,” they often mean in some spiritual or emotional sense: a concert delivered some cathartic experience or an album helped them make it through a difficult stretch. This weekend, Ishma Valenti and KHARI the Duo are part of a big lineup trying to directly support community organizations with missions materially help people in need.

The Lincoln vocalist/rapper joined Hear Nebraska FM in the KZUM studio Monday night to chat about the Nebraska Funk & Soul Alliance, which spreads through downtown Lincoln for a second-consecutive year this Saturday. The five-venue event brings together a variety of more than 30 Nebraska acts to support non-profit community organizations in Omaha and the Capital City.

“I’m in the entertainment business because I believe that entertainment can change people’s lives,” he tells us on the air. “What better way than to team up with nonprofits that are out there every day trying to push for the community?”

In all, eight charities will benefit from the festival cover and any additional donations, which will be accepted at the doors of Duffy’s Tavern, Zoo Bar, The Bourbon, Bodega’s Alley and 1867 Bar. They include: Omaha Home for Boys, Youth Care & Beyond, Youth Emergency Services and Youth Link in Omaha; and The Bay, Jacob’s Well, LightHouse and Malone Center in Lincoln.

Valenti also talks about the new direction he and partner Zach Watkins take from AZP to their new project. Sonically, the pair explore more heavily elements of hip-hop while turning an impassioned Valenti loose, conveying a message of black empowerment.

Listen to the interview below; stay until the end to hear KHARI the Duo’s “KINGS.”

The Nebraska Funk & Soul Alliance happens this Saturday, with music running from 6 p.m. to 2 a.m. Entry is by $20 donation. RSVP here.

BIB sinks into the muck in new video

Omaha hardcore band BIB has released a visual to accompany “Pressure II,” the closing track to its latest EP release MOSHPIT. In the video — directed by Emma Penrose and guitarist Jonathan Cobb — vocalist Nathan Ma’s studded-leather-gloved hand sinks into a vat of goop as thick and sludgy as the track itself while money burns nearby.

MOSHPIT is the band’s fourth release and first on independent punk label Pop Wig Records. Check them all out at their Bandcamp page here.

We have been overwhelmed by the positive support since announcing our merger with The Bay at the end of November. It seems the excitement is spreading.

Silicon Prairie News featured the new company, Rabble Mill, and its co-executive directors/fearless leaders Andrew Norman and Mike Smith in a piece published earlier this week. The digital media outlet — which focuses on technology and innovation in the Omaha/Des Moines/Kansas City corridor — gives a brief history of both organizations, how we came together and Rabble Mill’s focus on growing valuable skills in the next generation of creative Nebraskans.

“You can only dream as big as you’ve seen,” Smith told writer Rod Armstrong for the piece. “If you don’t see what is possible, you’re just stuck in your bubble. We’re raising the ceiling for what’s possible.”

Read the full story here and check out RabbleMill.org for more.

We’ve entered some mid-week show picks below. Find a fuller listing at our statewide calendar here and email us at news@hearnebraska.org with shows, news tips, story ideas and song submissions.