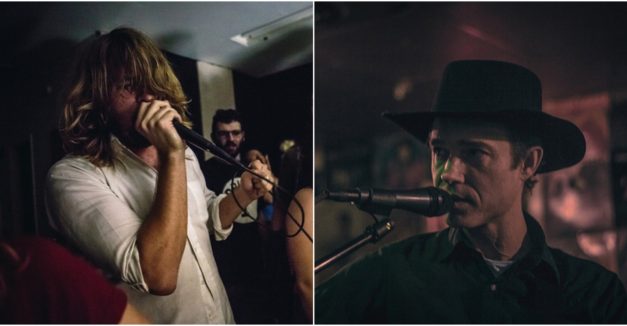 Simon Joyner and David Nance are heading out on the road together this fall, hitting a swath of living rooms with special edition merch in tow.

The longtime collaborators embark in October on what they are calling Diss Riptide Tour 2016, hitting their first living room in Austin, Texas on Saturday, Oct 8. Tour runs through California, the Pacific Northwest and parts of the Rockies, ending Oct. 22 at Gillie’s Bar in Kearney.

A handful of tour-only merch will be available throughout, either in-person at each show or online via Joyner’s label Grapefruit Records. Most notably, they include a Ghosts EP Salt Across Your Graves, a Joyner-Megan Siebe rehearsal tape from 2013 and a “lost album” recorded by Nance called Calling Christine.

Also of interest, the pair covered the entirety of the Rolling Stones’ 1973 triple-platinum album Goat’s Head Soup, which is widely considered to be the final album from the band’s “golden age.” The recording will be available during tour, as will Nance’s rendition of Lou Reed’s Berlin from the same year.

Both Joyner and Nance are touring in support of recently released material. Joyner’s Grass, Branch and Bone came out early last year on Woodsist Records, and the songwriter also published a retrospective book of selected lyrics called Only Love Can Bring You Peace. More recently, Nance dropped his first full-length, full-band album More Than Enough, recorded in Omaha, on Ba Da Bing Records.

As Joyner has done in the past, tickets for the tour can be purchased online. Doing so will place the buyer onto a guest list for the living room show. There will also be an opportunity to contribute to their gas fund. Find the complete list of shows and special merch here.

Lincoln folk/rock band Bernardus played a send-off show Friday night for its upcoming eight-week nationwide tour in support of its debut self-titled EP. Ben and Jake Kramer, who will perform during that trip as a duo, were joined by the full band, as well as Lincoln folk act The Wildwoods, Omaha band Pleiades & the Bear and singer/songwriter Lauren Bydalek.

Tonight, Omaha country act Belles & Whistles joins Hear Nebraska FM live in the KZUM studio during its two-hour Nebraska music show, which airs every Monday from 8-10 p.m.. The mother-daughter duo of Kelli and Jaymie Jones releases its debut EP Look Up this Friday, Sept 23 at Bushwacker’s, 7401 Main St in Ralston (RSVP here). The pair will play a few new tracks and sit for an interview. Tune in via 89.3 FM in Lincoln or stream at KZUM.org.

Tonight, Bay Area punks Swingin’ Utters come to Omaha’s Lookout Lounge, 320 S 72nd St. The band has been playing for the better part of the last 25 years, taking a seven year break from 2003-2010. Three of their nine albums have come in the wake of their reunion, 2013’s Fistful of Hollow being the most recent. Lincoln folk/punk band The Killigans and Omaha punk quartet Hand Painted Police Car round out the bill. Tickets to the 8 p.m., all-ages show are $15. RSVP here.

Plan your week in shows with our statewide calendar here. Send all news tips, story ideas and upcoming releases to news@hearnebraska.org.