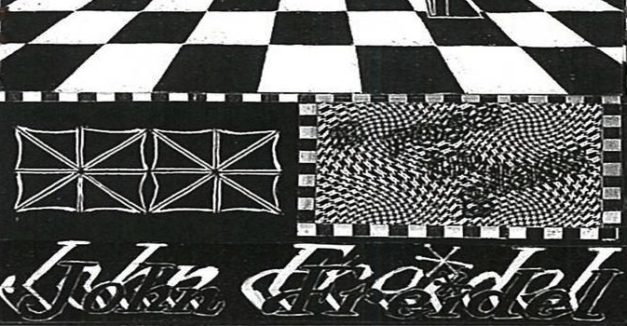 Lincoln musician John Friedel foray into the electronic has led him to create spacious prog rock with Universe Contest, synth-laden pop with Powerful Science and, most recently, merging straight-ahead and experimental elements through a fleshed-out band with Green Trees. On Nebraska’s first new release of 2017, Friedel is altering course once again.

A Rose In Glass is the orchestral debut album for a new instrumental solo project that bears his name, and its out now via his Bandcamp page. It features 17 tracks that, in just over an hour, explore a range of moods through use of vintage synthesizers and drum machines.

Friedel is no stranger to the theatric, having scored for locally produced movies and plays. On the record, that filters through in the tension-building “Heartthrob” and the eerily beautiful “Tracks In The Snow,” both fit for either a crystal winter wonderland or a John Carpenter flick. There’s dynamism, too, as “Love Theme” and “Lacrymal Sky” play on warmer moods.

There are plans to expand the project, and according to Friedel, a few music videos are already in the works. He will also look to add a lineup for live performance. Until then, hear the songs “A Rose In Glass” and “The Unknown” in director Dustin Ferguson’s upcoming horror film Skunkape Slumber Party and “Love Theme” in director Mark Thimijan’s comedic web series Wasted Nights.

And explore the album in full here.

As an argument between two people boils over right above Jocelyn in her latest music video, the Omaha singer/songwriter screams she’s had enough. Everything freezes as Jocelyn moves throughout the house, imploring everyone to try to understand each other, rather than fight.

“Don’t Be A Slave To The Hate,” Jocelyn’s passionate entry into the Mannequin Challenge trend,” dropped January 1. While the message is simple, delivered in Jocelyn’s signature upbeat pop style, the songwriter explains its urgency nonetheless.

“Right now we all really need to learn how to communicate and listen to really understand one other,” Jocelyn wrote in a post via her Facebook page. “This is the year, the day, the time, the hour, right now this minute is the time to start listening and learning and seeking to find a solution between one another. Let’s work together so we can all be equal and united.”

Tonight, Minneapolis sludge metal band Aziza comes to Lincoln, plays The Bourbon with Manslaughterer and Better Friend. Around since 2013, the four-piece band released its first proper EP High Hopes are at an All Time Low in June 2016; hear it here. 9 p.m. show, RSVP here.

Send all news tips, story ideas and more to news@hearnebraska.org.