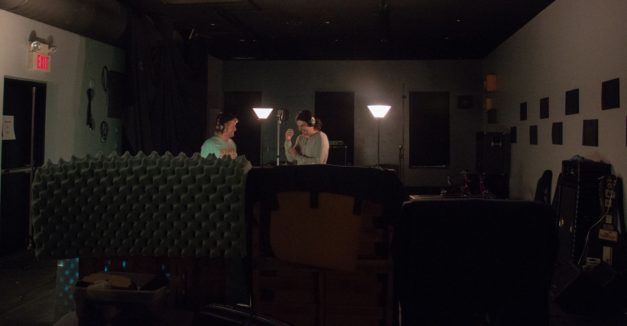 Inside the studio with Universe Contest

Photos and reporting by Tarah Dawdy

A lot has changed about Universe Contest since the band released We Are The Rattlesnake in April 2014. After a handful of lineup changes and a kind of sonic makeover, the Lincoln band headed back into the studio over the past few days to cut a new full-length album.

HN intern Tarah Dawdy stopped by Universe Contest’s recording and practice space near 11th and M on Wednesday as its Tim Carr, Joe Humpal and Jordan Ellis put vocals to tape with producer/engineer Mark Wolberg (working as Milktone. Last night’s session wrapped tracking for the album, which Carr says they are aiming to release digitally and on vinyl in March 2017. 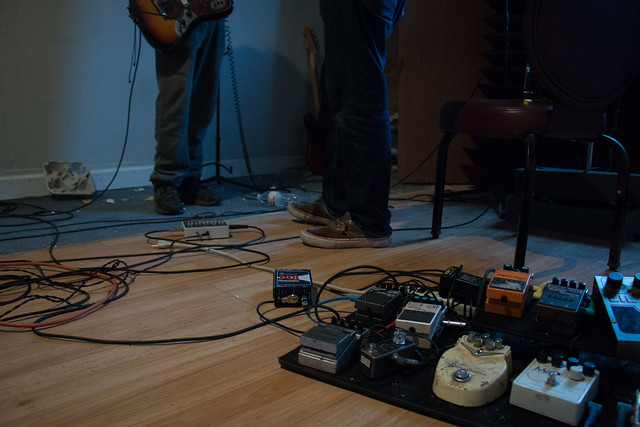 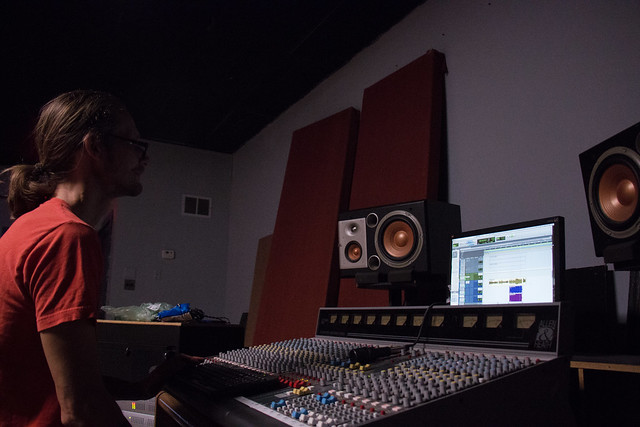 Wolberg works on recording a track 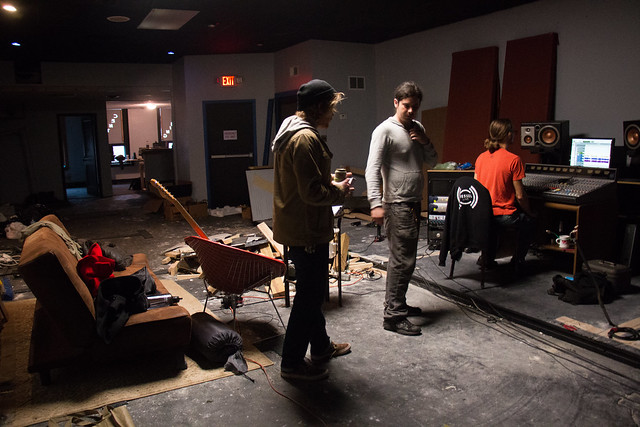 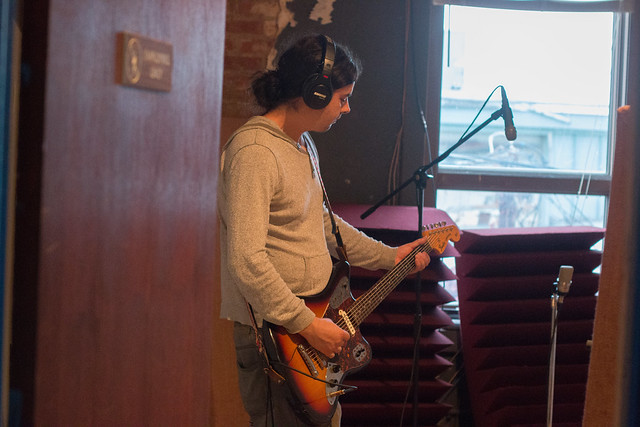 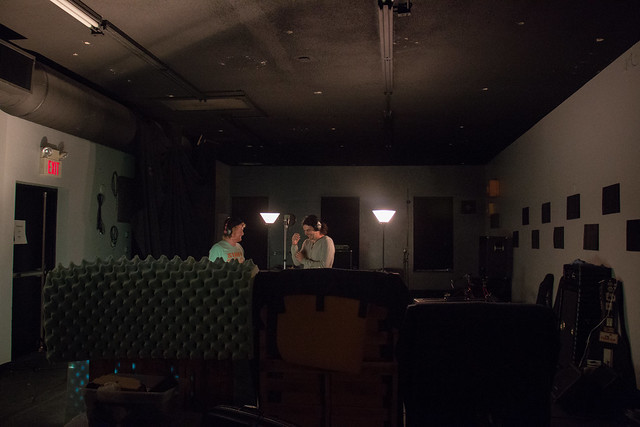 Carr (left) and Humpal laugh between vocal takes in the main room. Universe Contest used this room for full band and drum tracking. 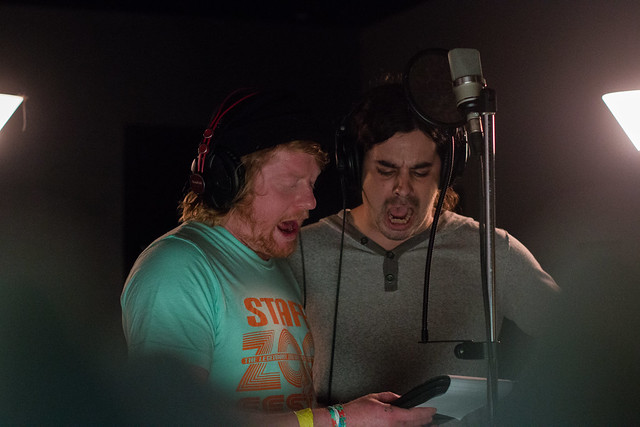 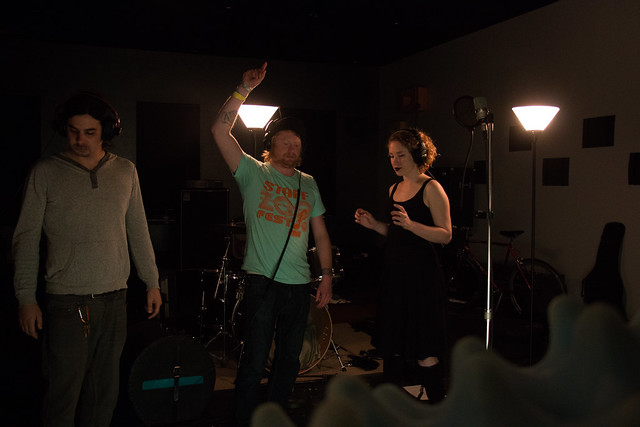 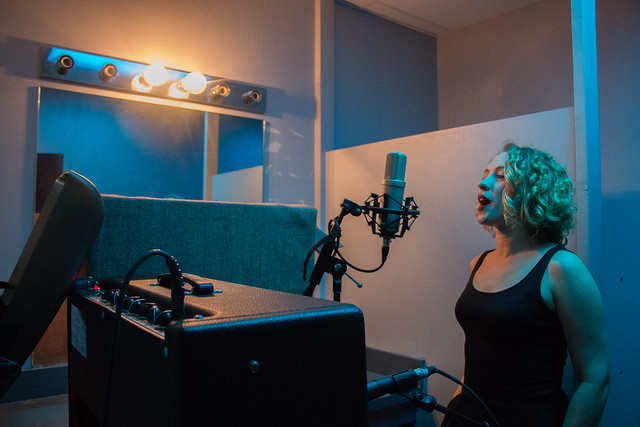 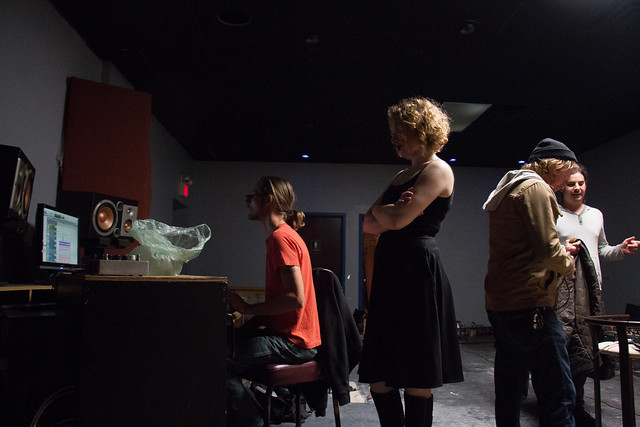 Wolberg and Ellis listen back to Ellis’ recording 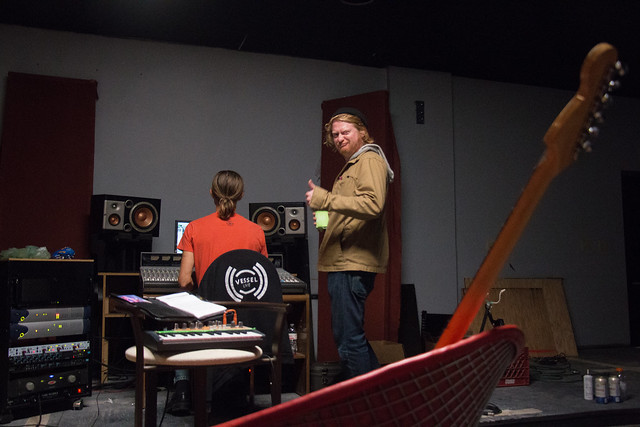 Carr and Wolberg review a track from Wednesday’s recording session. “Tim is the expecting father of a new album,” Wolberg said.

HN intern Connor Lepert caught a solo performance by Ben Folds last night at The Rococo Theater. Folds played with wit, whimsy and plenty of help from a sizeable audience, which dividing into a four-part harmony for “Bastard” and sang Regina Spektor’s part  in their duet “You Don’t Know Me.”

Midway through the set, Folds began taking requests from the audience via paper planes, several of which sailed through the air in different directions. Roughly 15 of them made it into the mix; Folds explained that he had practiced about 160 songs in preparation for what might find the stage. Some went smoothly, like “Kate” and “One Angry Dwarf and 200 Solemn Faces” from the Ben Folds Five album Whatever and Ever Amen. Others he failed to remember in-full (“Your Redneck Past”) or were songs that didn’t exist (“Parallel Universe”), so he improvised lyrics. Folds finished the set and came back for an encore rendition of “Army,” to which the audience contributed vocal horn parts. 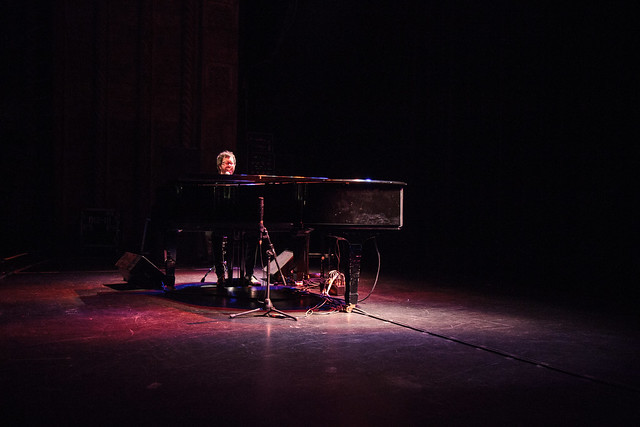 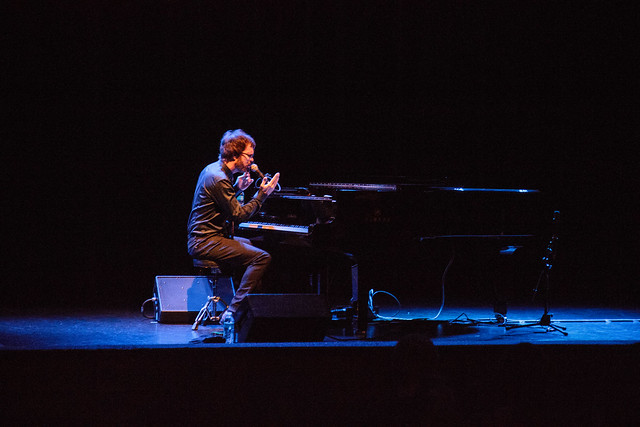 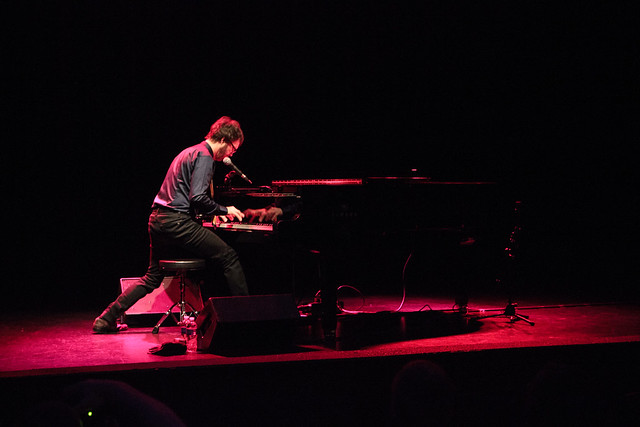 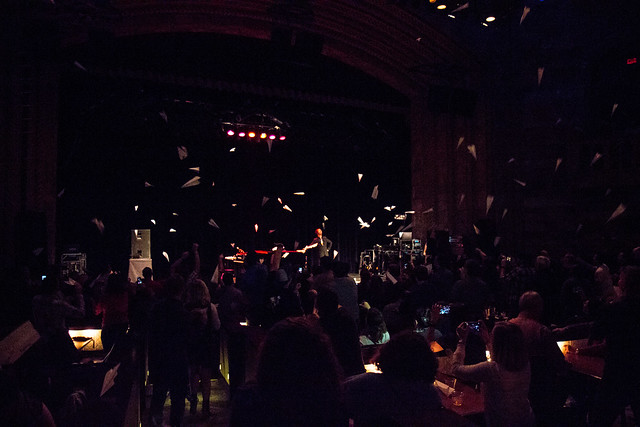 When Philadelphia’s Mumblr formed in 2013, it already possessed one of the band’s crucial elements: chemistry.

Born of the Philly’s basement indie rock scene, Mumblr hit the ground running with an already snappy, sharp sound on debut LP Full Of Snakes. That is perhaps due to its members — guitarist/vocalist Nick Morrison, guitarist Ian Amidon, bassist Sean Reilly and drummer Scott Sitzer — having many similar scene connections.

The four piece band plays O’Leaver’s this Saturday in the midst of touring on its self-admittedly moodier sophomore album The Never Ending Get Down, which dropped in June. That moodiness appears in Morrison’s lyrics as the result of searching, feeling trapped or locked into a fate. Often droning guitar riffs  and jangling leads on songs like “Champion” and “Microwave” lend an edge that recalls Long Drive-era Modest Mouse or early Silversun Pickups. It all moves quickly, fighting off the potential drag with energy and spunk.

Ahead of the show, Morrison exchanged emails with See Through Dresses vocalist/guitarist and HN contributor Sara Bertuldo about the new album, the ups and downs of the Philadelphia scene and how to brave a DIY tour. RSVP to Saturday’s show (with Tulsa, Okla. band Lizard Police and Omaha band No-Getter) here, and read their back and forth below.

Nick Morrison: Well we were four friends who played music in various projects that were semi-connected in the Philly music scene. After two of the groups broke up around the same time, we kind of naturally began writing music together. Essentially we were friends who were doing it purely for fun.

SB: How is tour going? Any favorite cities/moments so far?

NM: Tour is pretty great so far. We are super fortunate to be able to travel across the country doing what we love. The DIY scene is alive and well and we have met some fantastic and supportive people along the way. However, there are a lot of challenges, mostly regarding money. Funding tours this size is incredibly difficult and takes a lot of budgeting and self control. But the community of people that exist do a remarkable job of going out of there way to assist musicians as much as they can. Which is amazing. Favorite cities so far? Los Angeles, Atlanta, San Francisco and Austin and Tucson.

SB: Tell me about The Never Ending Get Down. What was the recording process like? How did it vary from the experience of writing/recording Full of Snakes?

NM: Never Ending Get Down was a much moodier album than Full of Snakes. We decided to record it 100-percent live which was a totally different experience for us. It really challenged our musicianship as well as our ability to mesh as a singular group. We recorded it with two talented engineers, Dan and James, in their warehouse/studio in West Philadelphia.

SB: I’ve had a lot of bands sleep over my house. Maybe since we’re in the Midwest, I feel like some bands are at the halfway point of their tour so sometimes tension arise. I’ve seen some arguments/fights. Your band dynamic seemed like it was in a healthy place. Utilizing my kitchen to make a meal and did yoga together. What’s the key to having a happy band relationship?

NM: We have all been friends for almost a decade and we have lived together for years as well. I think we all are pretty tolerant of each other’s little idiosyncrasies and, more importantly, are equipped to handle each individual’s specific type of bad mood. We all know one another pretty intimately at this point. Silence is the best weapon against arguing. Sometimes you just have to shut your mouth and swallow your opinion in order to keep things civil. In the end, we are jokers. So by not taking things too seriously we avoid a lot of unnecessary confrontation. Also thanks for letting us stay at your house.

SB: I was hoping for an Omaha name drop in that Family Fun tour teaser video. The video was great and reminded me of “Scranton, the electric city” from the Office. What are your impressions of Omaha?

NM: I actually did write a verse with Omaha! But we had to cut the video short for times sake. We all love Omaha. In our perspective, it’s sort of like oasis–a bastion of culture in the middle of nowhere. It’s like this magical city made from invisible ink. Or like a late night speakeasy you would never know is there unless somebody showed you. The city also gave us a lot of our favorite bands, so there’s that.

SB: What’s the best part/worst part about living in Philadelphia?

NM: Philadelphia has changed for me a lot in the past few years. I love the city. It is inspiring, artist friendly and relatively progressive. However, it’s a city that is super easy to get trapped in. It’s affordable and close to other major cities (NYC, Boston, DC, Pittsburgh, Baltimore, Richmond, etc). This causes a really bizarre, isolated and unique culture to form. It isn’t until you travel away from Philly that you realize how truly different it is from other places, for better or for worse. And many place in the US subscribe to this same mentality. I love everything and hate everything at the same time. It just depends on which day you ask me.

SB: What do you listen to in the van? Do you still have that copy of Linkin Park’s Hybrid Theory on vinyl?

NM: We do! Shout out do Josh from New Brunswick (now Philly) for gifting that to us. We listen to a lot of Chance the Rapper, Isaiah Rashad and D.R.A.M. For longer drives I’ll usually throw on some stand up comedy like Patton Oswalt, Maria Bamford, Doug Stanhope, Tom Segura and Bill Burr.

SB: What happens next after this tour?

NM:After tour we are pretty much immediately going into the studio to record our next album Genie which I’m very excited for. A lot less moody, more laid back and fun.

There’s plenty else to get into tonight, from Flannel Mouth, Sweats and Herbert’s Rainbow at Duffy’s Tavern (RSVP here) to Yeasayer and Lydia Ainsworth at The Waiting Room (RSVP here). See these shows and more on our statewide calendar here.