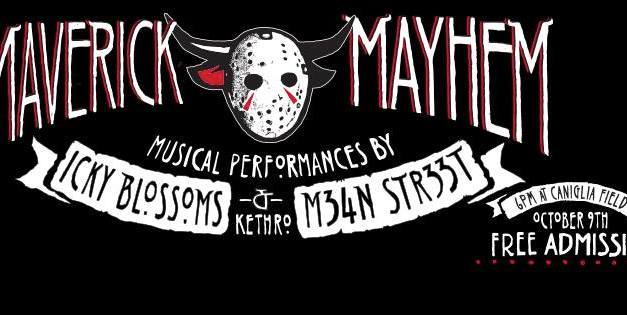 The University of Nebraska at Omaha celebrates homecoming, the beginning of hockey season and the opening of its new community arena Thursday, 6 p.m. at Caniglia Soccer Field. The event, “Maverick Mayhem: Party on the Pitch,” features performances by Mean Street, Icky Blossoms and Kethro.

Open to the public, food trucks and drinks will be available and The Marching Mavericks and UNO Drum Line will perform. Maverick Mayhem shuts down around 10 p.m., with Mean Street beginning around 8:15 p.m., followed by Icky Blossoms. Kudos to UNO for booking local acts.

Colony House, a Nashville melodic rock trio, released its debut full-length, When I Was Younger, in July, on Descendant Records.

We’ll be playing two hours of Nebraska music from 8-10 p.m. while talking about the benefits of community radio. You can contribute online at kzum.org or call into the station at 402-474-5086. Please specify donations with Hear Nebraska FM’s name.

Be on the lookout for a primer on all the in-studio live music HNFM has featured in its 18 months on the air.

Monday means add day on HN Radio, streaming at the top of every page on our site. We’re rolling with a song from Michael Wunder’s in-studio appearance on HNFM last week, a new song by Mitch Gettman, a Bus Gas track off their forthcoming Snake Hymns and more. Additional thanks to Omaha bands Webb and Foreign Body for specifically sending us tracks to feature. That door is always open, Nebraska bands.

Lastly, we had a great time at Music University in Des Moines this weekend. Caught a show at Vaudeville Mews on Friday night: J.E. Sunde and Frankie Teardrop. Check out that venue if you’re passing through. Orenda Fink tours through there on Oct. 18.

Big thanks to the Des Moines Music Coalition for putting on all Saturday’s workshops and panels, and to moderator Chris Ford for making us feel welcome as we chatted about what nonprofits, like Hear Nebraska, can do for a local scenes on Saturday morning.

Managing editor @chance_s_p and staff writer @jzlomke spoke with Chris Ford of Des Moines Music Coalition about how nonprofits can foster local music scenes. Thanks for having us #MusicUniversity!

Chris will be in town Thursday night for Lincoln Calling when Christopher the Conquered and Gloom Balloon play Duffy’s Tavern. We’d strongly recommend both acts.