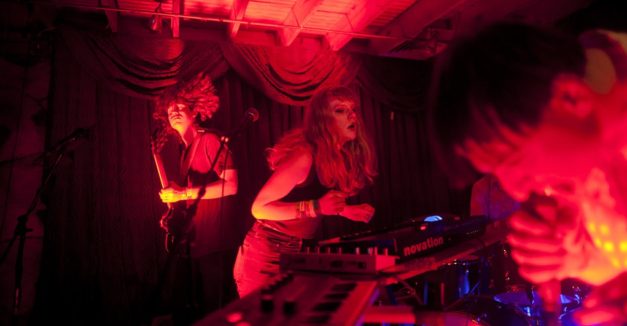 More than a year after releasing its electronically sprawling, chaotically claustrophobic sophomore LP Mask, Icky Blossoms has captured its essence in virtual reality.

The Omaha indie rock band shared the 3-D, 360-degree video for “Phantasmagoria” yesterday. Imagined as a V-R-game-like setting (and created in partnership with video game developer 2DArray), it takes the viewer through a wormhole in a bedroom and into outer space, introducing a wealth of visual stimuli to complement the spastic, electrified track.

The band started working on the video around the album’s release, after meeting one of the developers at 2DArray. The goal was to simulate and visualize the bedroom listening experience.

“The inspiration of the video is being young in your bedroom, getting lost in music,” the band told HN yesterday. “None of it was filmed. It was all just envisioned and written down and then interpreted [by 2Darray]. It was very interesting way of working. The gaming world takes a long time to get things done, but days like today make it all worth it.”

Naturally, the best way to view the video (downloadable through the Oculus Rift) is through a virtual reality headset, but the 360 YouTube stream allows exploration as well. The band hinted at an Easter Egg as well.

Explore the video below, and buy 2DArray’s Observatory: A VR Variety Pack, which features the video, here.

First Friday promises to be a warm one, and after our own hearts, Benson’s festivities will feature busking musicians galore.

Check out the full schedule below (all times p.m.) and RSVP here for tomorrow’s complete BFF listing:

In Lincoln, Richmond, Virginia, post rock trio Comrades kicks off a nationwide DIY tour at The Commons, 1239 S 14th St, with Kearney band Cruz Control and Oklahoma City act The Happy Alright. Comrades’ Laura McElroy will also play an acoustic set. There is a suggested $5 donation at the door for the touring bands. Show starts at 7 p.m. RSVP here.

For a fuller listing of shows, head to our statewide calendar here. If you do not see your show or one you plan to attend, email us at news@hearnebraska.org, post it in the comments or add it here. Use that same email address to send us news tips, story ideas and song submissions.