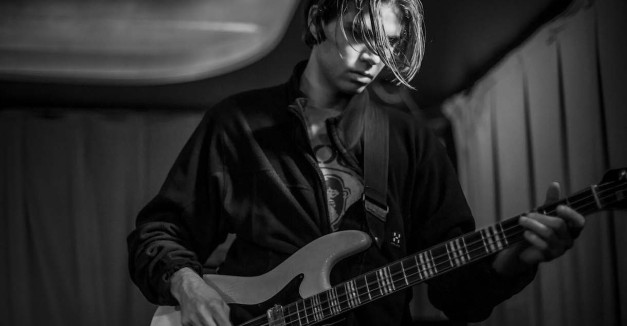 Iceage announced a bunch of tour dates publicly today, and Omaha is one of them. They’ll play with Helm on Oct. 24 at the Slowdown, one of a great recent string of Eyeball Promotions shows. The Danish band will tour new material that will probably end up succeeding 2013’s You’re Nothing.

Earlier this week, Manic Pixie Dream Girls put two tracks up on their Bandcamp page, “Anorexia” and “Babe Rock.” For the uninitiated, MPDG is a punk trio out of Omaha with a definitive feminist streak. These two tracks are no exception. “Anorexia” will appear on Club No Quiet’s first release, a 7-inch split with Anna McClellan (of Howard). McClellan’s track, “On Your On,” played on HN Radio’s inaugural playlist.

Yesterday, the Waiting Room announced a Sept. 6 show, featuring Conchance. With the release of M34N STR33T’s album, Mutants of Omaha, in April, Conchance’s solo performances have been rare these past few months. You can read the story of Mutants of Omaha, a psychological journey through a cerebral Omaha, here.

Speaking of M34N STR33T, producer Adam Haug (aka Haunted Gauntlet) says to be on the lookout for a “Nite Owl” music video, the group’s first, leading up to their Maha appearance on Aug. 16.

The Blind Pets return to Duffy’s Tavern tonight with Bogusman, a band that apparently doesn’t rest (as they played Hear Nebraska’s Maha showcase last night at The Bourbon). The Blind Pets are showing up with their fellow Texans: Purple.

Orenda Fink continues rolling out guest editor’s notes at Magnet Magazine’s website this week. Most recently, she’s written on little white dogs: “I imagine one day when I am older and more sedentary, I will collect a small herd of weird little white dogs and lay around with them in a white room in a white dress.”

A big thank you goes out to all the bands and fans that turned out to The Bourbon last night for the free Maha showcase to see blét, Bogusman and A Ferocious Jungle Cat. You can find coverage of the show later today on Hear Nebraska. Our Shelby Wolfe took the photo below.

As always, shoot me any tips, concerns, pizza recipes and treatises on Gravity’s Rainbow.